This 1948 Chevy pickup has a 350 Chevy engine with 350 automatic transmission. It has a Mustang II IFS installed. It also has a car rear end, but I don't know what it came from. What I do know is that it runs 70+ MPH down the freeway with no problem. It runs great! In the five years that I've owned it, I've put less than 500 miles on it (after driving it across the entire country). Mostly it just sits in the driveway and collects dust (not to mention neighbor complaints). But every time I start it up - even after it sits all winter - it fires right up. I had big plans for it, but after five years I have come to the realization that I am never going to do anything with it (other than admire it as it sits in my driveway). So, finally, my wife and my neighbors will get their wish as I've decided it's time to part with it.
Make no mistake, this is a driver, not a $50K show truck. It looks amazing from 20-30 feet away, but up close and personal the blemishes become apparent. The body was restored about 15-20 years ago, and it is certainly starting to show its age again. I have taken close up pictures of the biggest, most obvious blemishes (paint peeling, rusting). There is also minor paint chipping here and there as would be expected from a 20 year old paint job. Other ways that it's showing its age: door handles are loose (one of them falls off), the driver's window is very difficult to roll up, the vacuum operated windshield wipers do not work very well. Of course, these are all fairly simple fixes. The first three things I was going to do were: (1) add power steering, (2) add power brakes, and (3) install an electric wiper system. When it was restored, an AC system was added, but these other modern conveniences were not. It also needs new tires. I have replaced two of them, at different times, but they do not match, and the remaining two are very old. The rims are showing some rust, most of which I would imagine could be removed, but I haven't tried.
As much as I love this truck, I just don't have the room for it since we moved into town. I've tried to list all the flaws, and show the cosmetic flaws in the pictures, because I don't want the buyer to have any unpleasant surprises. But feel free to have it inspected. If you want to see it in person, drive all the way to the west end of Washington Ave, in Yakima, and you can't miss it. 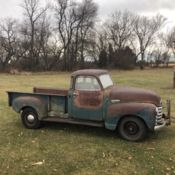 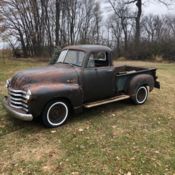 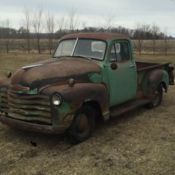 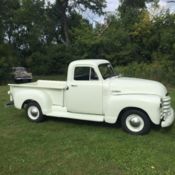 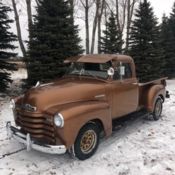 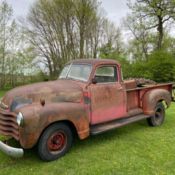 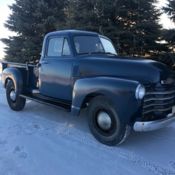 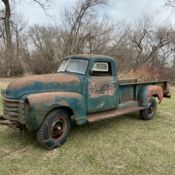 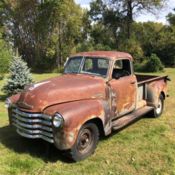 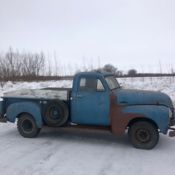