Right now, the biggest performance bang for your buck is unquestionably the C4 Corvette. Comfortable, reliable, and fast, they're everything you'd want in a modern sports car, and cars like this 1990 Chevrolet Corvette coupe are a fantastic way to have fun without breaking the bank. Torch Red has looked good on the Corvette practically from day one (OK, red wasn't on the menu until 1955, but you know what I mean). The C4 has aged quite well, still remaining...Â an iconic design that resonates with enthusiasts who know that during its tenure, it was one of the most potent cars in the world with handling and braking to match. Today, finding an unmolested survivor that has been in adult hands all its life is rather rare, given their combination of performance and reasonable cost. Fortunately, this car survived quite nicely and proudly wears its red paint and fiberglass skin in defiance of nearly 30 years of service. As GM's flagship built in a dedicated factory in Bowling Green, KY, paint quality was above average on the 'Vette and thanks to 22 years of being someone's cherished toy, it looks pretty good, although a professional buff would really wake it up. And nothing makes an entrance like a shiny red Corvette with a rumbling exhaust. Corvettes were pushing technological barriers in 1990, and this coupe is equipped with just about every trick GM could dream up. The basics, of course, are covered: power locks and windows, A/C, and a tilt column, among others. The black leather seats are in decent condition with only some minor wear on the driver's outer bolster, which admittedly sees a lot of action, and some cracking in the leather that's probably inevitable. The digital/analog instrument panel still has bright, sharp markings and the digital gauges are a lot more legible and functional than you'd think. The auto shifter falls to hand easily and you'll find that getting into this car is like coming home, because everything is right where you expect. The hatch area isn't great for storage, but it's good enough for two people, and aside from a spill mark on the carpet, it's in good order. This is still a great place to hang out and have some fun. The 350 cubic inch L98 V8 was the mainstay for much of the C4's production run, eventually supplanted by the LT1. However, for many Corvette fans, there's just no substitute for the big hit of low-end torque delivered by the L98 and thanks to a vast aftermarket, performance upgrades are little more than a phone call away. However, this remains a double-edged sword and finding a Corvette without all the bolt-ons is a challenge. However, aside from an aftermarket exhaust system with a mellow soundtrack, this one carries all stock-style equipment. That means when you turn the key, it starts. It's a little grumpy when it's cold, but most L98s are like that, and it goes away pretty quickly as it warms up. And yes, the torque is impressive, hurling the car forward like it was launched from the USS Nimitz's catapult. The 700R4 4-speed automatic overdrive transmission is quick-witted and with an overdrive gear, it just loafs along on the highway, making the C4 and ideal high-speed mode of travel. Powerful disc brakes, a reasonably comfortable suspension, and giant 275/40/17 Goodyear radials mean that it's ready to rock today. Representing incredible performance and incredible value, this Corvette definitely delivers on the promises made by its famous bodywork. Call today! 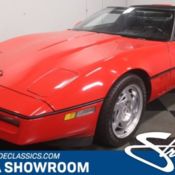 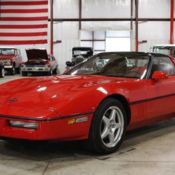 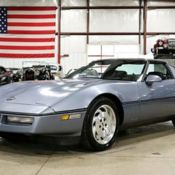 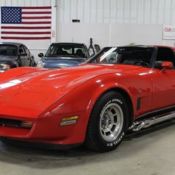 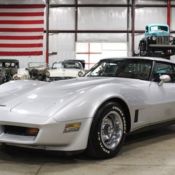 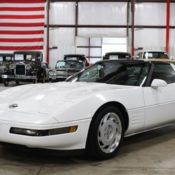 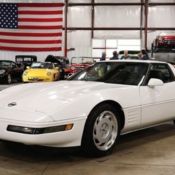 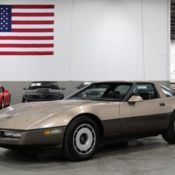 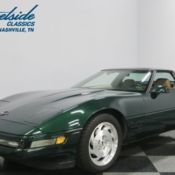 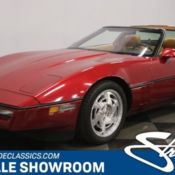