You can safely ignore the wheels, because this 1955 Chevrolet Bel Air wagon is beautifully restored and not modified the way you'd expect. Sure, there's a great-running small block V8 under the hood and a spectacular interior, but most of it is just the way the factory did it in 1955. Bel Air wagons are rather rare, and someone spent the time to restore this one to a level worthy of that rarity. Gypsy Red is its original color, and...Â the cheerful color looks especially good on wagons with their white roofs, creating a flashy car that seems like it should be far more expensive than it is. Bodywork is excellent, with super straight steel underneath that gleaming red paint, and you know that getting four doors to hang right is especially difficult. The modern urethane paint has a vastly superior shine to the original enamel, and with the Bel Air trim, it really looks spectacular. The simplicity of the 1955 Chevys is especially evident here, but that might be why it works so well, especially with those wheels. All the chrome and stainless trim was obviously restored or replaced during the restoration and looks spectacular. If it's attention you crave, this wagon is going to deliver in a very big way. Code 517 Beige was this car's original interior choice, so that's what went back in during the restoration. The materials are probably nicer than anything GM was using in the '50s, yet it looks quite authentic, giving the interior a bright, airy look that is a nice contrast to all the plain station wagon interiors you've seen. The carpets are beautifully fitted and bound, the door panels are rimmed correctly, and even back seat passengers will feel like they're in first class. The dash was fully restored, painted body color and then filled with rebuilt gauges with crisp markings. The steering wheel was also fully restored and even the original AM radio remains in the center of the dash. It also includes a large cargo bay that's trimmed in matching materials and looks simply fantastic. This is an extremely impressive wagon in every way. The tidy-looking small block V8 is a 283 cubic incher from a 1958 that was rebuilt to stock specs, detailed for show, then dropped into the engine bay. Completely as it was in 1955, there's a 2-barrel carburetor on top, a heavy-duty oil bath air cleaner, and a generator to make the electricity. Chevy Orange paint on the engine itself makes it really pop in the otherwise all-black engine bay, and aside from a few bits of plastic wire loom, it is very much as it would have been decades ago. Standard exhaust manifolds lead to a nice-sounding dual exhaust system, one of the car's few modifications, but who wants a Chevy that doesn't sound like one? The 2-speed PowerGlide automatic transmission was rebuilt and reinstalled, while the original rear end hangs out back on stock leaf springs. The undercarriage is clean, but it wasn't totally disassembled and restored; after all, this was a car that was built to drive and why mess it up by chasing perfection? It starts easily, idles well, and runs like a V8 Chevy should, with plenty of pep and great road manners when you're on the highway. Those big 17-inch Torque Thrusts give it an awesome look, and they carry fat 245/45/17 performance radials that make the car feel nimble. This is a gorgeous car that's built right. Easy to drive, beautiful to look at, and eminently practical, it's the wagon you want if driving is what you enjoy most. Call today! 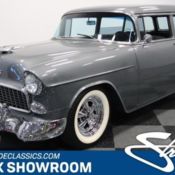 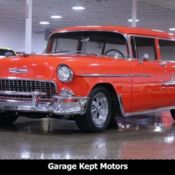 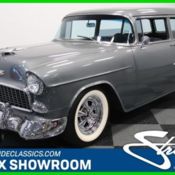 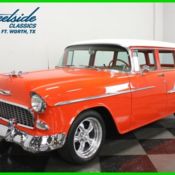 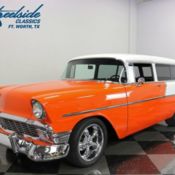 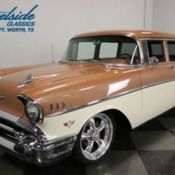 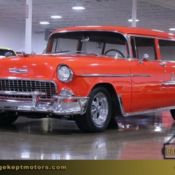 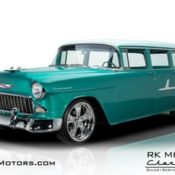 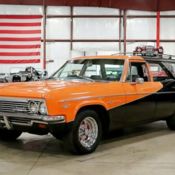 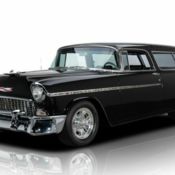