The guy I bought this from had stored this car in a barn up in Kansas for over thirty years before I bought it seven years ago. It looked as if someone had started to hot rod the car in the late 60's or 70's and repair the rear quarters where there was a truck bed installed probably during WWII. They had put a 283 V8 and manual trans out of a 1961 Chevrolet and a 1955-1956 Chevrolet passenger car rear end. Other than that, the car mostly appeared original I did have this running and driving in 2014 but have since pulled the front clip, running boards, fenders, motor/trans, and interior to replace the floorboards and do the body work. My plan had been to build a late 1950's hot rod but I just don't have the time to work on this. It would be a great project for someone and the hard part of gathering all of the original components and the speed parts has been done. Whether you want to continue this path or make a Gasser or a Rat Rod or Street Rod or go back all original, it's at the point you can take it in any direction you want to
Since I purchased the car, I have made the following updates:
-Engine is a freshly rebuilt 1956 265 V8 punched out to a 283 with an mild cam, Edelbrock 2x4 intake w/ 2 500cfm, progressive linkage, rebuilt generator, stock ram horns with new dual exhaust, points distributor, finned aluminum valve covers and air cleaner. Radiator is original but has been reworked and a neck for a pressurized cap installed. I did weld in a Speedway motor mount crossmember so a guy could 1958 or later V8 in the car. Once a motor is stuffed in this tight compartment, you can't tell it is there either way you go. The motor is a long block-it just needs the manifolds and accessories bolted on and new manifold gaskets are supplied.
-Transmission is a 1961 3-sp manual that worked but was a little loud in 1st gear. It was in the car when I bought it.
-Front end has been updated to a Speedway Gasser Front End with a 6” drop axle. I was trying to get this to a stock height but it is just a Speedway Straight Axle away from being a true gasser. The spindles are 49-54 Chevrolet. Steering is the original style and the car comes with an extra gearbox assy.
-The 1955-1956 Chevrolet rear end was not mounted properly in the car when I bought it so I remounted it with a Chassis Engineering Rear Spring Kit. The center section is a 1955-1964 4:11 posi-trac. The car also comes with a 3:36 peg leg.
-The brake system is fresh with 4-wheel drum and using a new master cylinder for a 1938 Chevrolet
-Wheels are factory style 5-lug artillery from Chevs of the 40s with Firestone Wide Whites 6.70-15.
-The car was wired to run with a new Mr Roadster wiring harness before it was taken apart but the harness going to the rear of the car for tail/brake lights, sending unit, etc will need to be replaced. It was damaged when the floors were removed and could be salvaged with what is left. There are new Stuart Warner Winged gauges on the aftermarket aluminum gauge panel.
-I have an extra set of rear quarters to fix the damage done from making this coupe a pickup probably during WWII. When they converted the car back to a coupe many years ago, the repair job was poorly done. I also have an extra pair of rear fenders, new tail pan, new panel behind the tail pan, driver side cowl patch panel, new mid floor pan (mostly installed).
-Fuel tank is a Speedway fuel cell with a universal sending unit.
I would say that there is 95% of the parts to make this car complete even down to the headliner bows. The car does have a clear title.
Please message me if you need any specific details or a specific pic.
The vehicle is for sale locally and I reserve the right to end the auction if it sells locally.
Buyer is responsible for shipping. I would be willing to hold the car for up to 30 days after auction ends so that pick up arrangements can be made but full payment is still expected in 7 days per the auction. 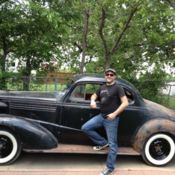 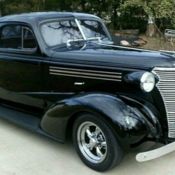 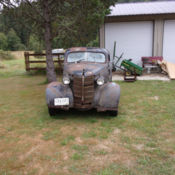 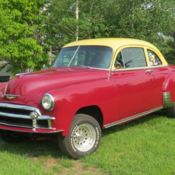 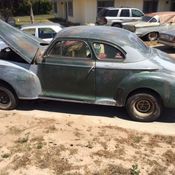 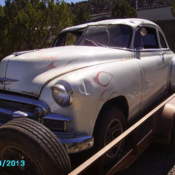 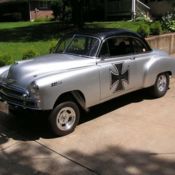 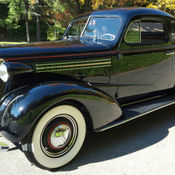 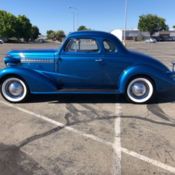 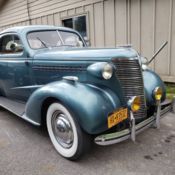