From 1930s prestige to present day performance, Cadillac has always delivered premium, American-tinged opulence. With that in mind, power has long been a hallmark of the Cadillac brand, and fitting a working man's car with a hotted up Caddy powerplant is a trick that's almost as old as hot rodding itself. For decades, southern California has been awash in killer Ford Deuces that feature buff Cadillac eights. Here in the American south, brazen moonshiners outran flatfoot revenuers with late '30s Fords that were upfitted with big Caddy motors. Heck, even Cadillac parent General Motors got in on the action when it proliferated Cadillac's homegrown Northstar V8 into select Oldsmobile and Pontiac offerings. So, when we tell you this sweet Bel Air benefits from storied Cadillac power, it shouldn't be a big shock. That is, until you look a bit closer and realize "storied Cadillac power" actually means 6.2 liters of supercharged LSA. You know, the engine that minted the 2009 Cadillac CTS-V's title as fastest production sedan in the world!

The beneficiary of a ground-up, nut-and-bolt restoration, this freshly finished Bel Air does an excellent job of wrapping vintage style around modern technology. A solid California fruit that was ripe for customization, the car was subjected to a systematic, no-expense-spared build that began with all its panels being stripped bare. After that thorough cleaning, those surfaces were carefully massaged and layered in liquid-smooth Lexus Atomic Silver 2-stage. Every inch of that dynamic pigment was sanded, buffed and perfected - top to bottom. And in early 2017, this sweet Chevy stormed the scene as a lights-out custom that mixes classic good looks with world-beating performance!

This Bel Air is rolling proof that more doesn't necessarily mean better. The car continuously turns heads by simply doing what it does best: being one of the finest collectibles on the planet. No heavy add-ons or overwrought fabrication, just great proportions and tasteful aesthetics. Up front, a smoothed, 1-piece bumper traces a polished grille, clear parking lamps and chrome-trimmed tri-bar headlights. At the top of that grille, a shaved hood leads the eye to a flowing greenhouse, which founds smoked glass behind polished frames, capped wipers and a filled cowl. At the base of that glass, factory door handles and small mirrors reflect monochromatic trim spears. And at the back of the car, a shaved decklid and clear, LED-lit tail lamps shade a smoothed and tucked bumper.

No car guy worth his salt will dispute the merit of anything with eight cylinders and General Motors pedigree! After nearly a century of global competition, The General continues to produce one of the world's best combinations of world-class economy and world-beating performance. This hardtop's top-notch restoration is built around a stout, 6.2 liter LSA V8 that's based on GM's award-winning Generation IV small block. Exclusive to the second-generation Camaro ZL1 and second-generation Cadillac CTS-V, the LSA utilizes an aluminum block, a low-lift cam, modified heads and 9 psi of Eaton boost to twist 580 horsepower into 556 lb./ft. of earth-moving torque. Dressed in a V-Series shroud, standard to the 20K mile CTS-V it was sourced from, the big engine shows surprisingly well. At the front of that shroud, a quality Concept One serpentine drive spins modern power steering and a painted Powermaster alternator beneath a reusable filter element. In front of those ancillaries, a polished support seats a polished Mattson's radiator between a polished Mattson's condenser and dual electric puller fans. Fluid reservoirs are on point, with a familiar Wilwood master cylinder complementing trick BMR heat exchanger plumbing. Exhaust exits through Stainless Works long-tube headers. Everything communicates well thanks to a Speartech ECU, a Speartech wiring harness and 7mm plug wires. And the car's smoothed, Atomic Silver engine compartment looks fantastic trimmed in polished Eddie Motorsports hood supports.

Park this custom on a lift and you'll find a spotless undercarriage that's prepped, primed and ready to roar. A fresh 6L90 6-speed, donated by the same CTS-V as the car's buff powerplant, turns a modern Camaro differential. That all-GM driveline is an integral part of a custom-fabricated chassis, which hangs a sixth-generation Corvette front suspension opposite a fully independent rear suspension. Quick stops are a cinch thanks to third-generation Corvette Z06 calipers, which utilize 6-pistons up front and 4-pistons out back to squeeze four drilled rotors. Naturally, the aforementioned modern power steering fuels a modern rack-and-pinion set-up. A custom exhaust system routes spent gases through an X-shaped crossover and aggressive mufflers. And the Corvette theme continues with chrome, Cup-style wheels throwing torque through two 245/45R18 Pirelli P Zeros and two 325/35R20 Pirelli P Zeros.

Open the doors and you'll find a custom leather cockpit that takes plenty of aesthetic cues from Cadillac's premium V cars. Top dead center, a monochromatic dash frames modern telemetry and pushbutton ignition in matte paint, glossy billet and alcantara padding. Plucked from the same CTS-V that donated its driveline, this Chevy's plush bench and bucket seats feature power operation for the two front passengers. Between those passengers, a custom console balances a CTS-V shifter between controls for a Vintage Air climate system and buttons for a full suite of power windows. Beneath that console, clean carpet floats piped and color-keyed floor mats opposite a tight, alcantara headliner. At the sides of that liner, custom door panels found requisite billet handles on, you guessed it, more supple alcantara. In front of the driver, a tilting Ididit column spins a half-wrapped billet wheel. And behind the passengers, a leather-lined trunk features plenty of space for luggage to stretch out. 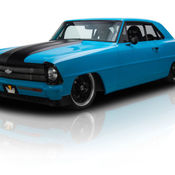 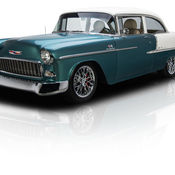 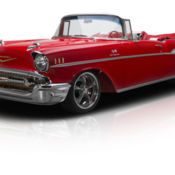 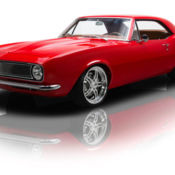 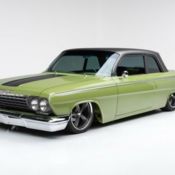 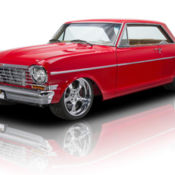 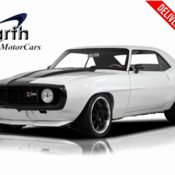 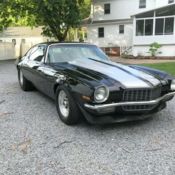 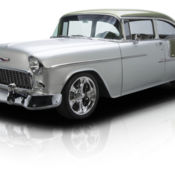 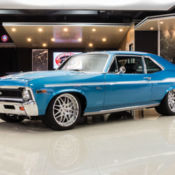