Up forauction is a 67 Malibu. I HAVE A LOW RESERVE ON IT TO PROTECT MY INVESTMENT, NOT AN INSANE NUMBER THAT MYSELF AND THE REST OF THE WORLD KNOWS IT WILL NEVER HIT! This car is FAST!! It has afresh 402 with a block suffix code oftkx, meaning itoriginally came outof a 72 pickup. The block is bored .060, with 11.5:1 compression. The heads are oval port L34 396cid 325hp / L36 427cid 390hp/ L68 427cid 400hp, with a cast number of 3904390, a date codeof 11/2/66,and roller rockers. It has headers with bolt-onmufflers no tailpipes. Theintake is analuminum WelandStealth, withwhat I would say is a 3in rise, and a big ol Holley 850 cfm double pumpersitting on top of it. I bought this car already built, strictly for investment. Part of the deal was that he kept the new Demon carb that was originally on it for his drag car in exchange for the Holley. The Holley carb is not new and was kitted. There is a little hesitation when youhit the gas and anoccasional backfire when you get out of it. I think that the carb needssome adjustment bysomeone who is a better carb man then me, and good carb guys are getting hard to find around here. But when she catches her breath hang on!! I would say the car is somewherearound 450hp. The tranny is a TH400 with a line lock that is not hooked up. The rear end is a 3:31 geared 12 boltposi with a casting number of 3959038 which originally came out of a 69 Chevelle. This Chevelle has power steering and manualdrum brakes. It has an older repaint and has some chips and other small imperfections, but still shines very nice. There was some damage tothe car ontheright rear quarter that was fixed but not painted.The door, trunk,and hood gaps are not perfect. There is some rust in the front fenders andthe drivers rear wheel well. The trunk floor was replaced at some time and is solid.The floorboards have rust in them but somebody put patchpanels over the holes asopposed toreplacing them. The frame is in very nice shape. Thepanel betweenthe rear window andthe trunk isalso very nice and solid. It has an original SS hood and steering wheel. The interior has been replaced and in very nice condition except a small rip in thestiching on the headliner and a small rip in the carpet on the drivers side. It has a piece of strap ironfastened to the dashwiththe tach, electric fuel pump switch,and line lock switch on it. It has Keystone Raider wheels with new tires. It also comes with a set ofrally wheels and 67 only center caps and beauty rings. Thechevelle was raced with a small block in it for quite a few years, but was never caged, tubbed, or where I can tell it has been wrecked.The small block was pulled andthe big block was built, installed, and was sold without being raced. All in allit is a nice, very fun driverthat can be used on thestreet or strip.The body tag decodes as followed.
Date code--- 12b-- built on the second week of December of 66
Style-- 67-13617-- Sport Coupe 5 passenger
Body-- Kansas City plant #136147
Trim-- 763-b-- Black bucket seats with center console
Paint--N-N-- Madeira Maroon
Acc-- E-- Tinted glass 2MG-- Powerglide with center console 5Y-- Deluxe seat belts 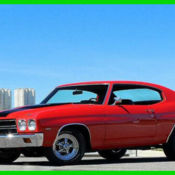 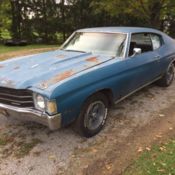 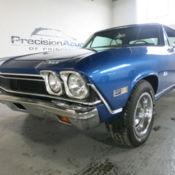 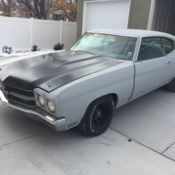 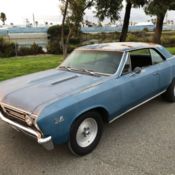 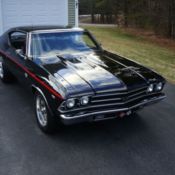 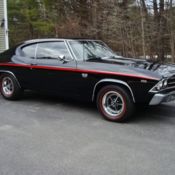 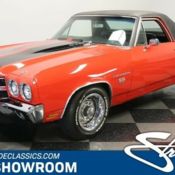 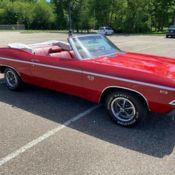