MotoeXotica found a live one with this local offering – a big, beautiful, and powerful Tuxedo Black Chevrolet Impala Super Sport that is still finished in its factory correct black exterior and black SS bucket seats and interior. This is a two-owner Missouri car; it was a local market find. It was built at the former GM Assembly Plant in St. Louis during the third week of March, 1966 (build code 03C) and originally sold in Sedalia, Missouri. It has 44,571 miles on the clock, believed to be actual miles as told to us by the estate of owner #2, Ted Whitaker. We used information from the estate as well as the condition of the car’s parts to verify its originality.

Here is the story behind this original vehicle – it was sold by Mike O’Connor Chevrolet in Sedalia, Missouri to its original owner, who sold it in 1989 to Ted Whitaker with 28,000 original miles on it.

Whitaker, who was born in Sedalia, used to own the Bearded Clam Bar and Lounge in Kimberling City, Missouri, on Table Rock Lake; his regular customers would probably remember seeing this Impala parked outside.

Knowing he had a numbers-matching car, Whitaker had to make a decision. He really wanted to enjoy his new toy but he wanted to keep the miles and wear and tear off of the low mileage numbers-matching 396ci big block stock engine. The solution? He took the stock engine out and replaced it with the engine currently found under the hood and stored away the factory engine.

Whitaker and his wife sold the bar in 2013 when his health began to decline. After Whitaker passed away in 2015, his widow later sold the car to us.

The car has a 454 CID LS-7 V-8 engine from Chevrolet Performance, making 505 horsepower and 470 pounds-feet of torque and is linked to a Turbo-Hydramatic 400 three-speed automatic with floor shifter. It features power steering, power-assisted drum brakes and 17-inch aftermarket chrome five-star wheels within Nitto NT 450 Extreme Performance radials. Tire sizes are 255/50R17 in front and 275/50R17 in back. Car comes with an added bonus; the numbers matching factory original 396 Turbo-Jet V-8 long block engine is included with the sale of this Impala (T020IIVR #6S225841).

The factory-correct Tuxedo Black paint shows very well, its body panels are laser straight and the panel gaps are tight. The hood has a reversed scoop for cold air intake. Fenders, doors and trunk lid are all in very good condition and the inside of the trunk is immaculate. The chrome bumpers and door handles are in good shape and offer great contrast to the paint. There are some slight blemishes on the car that can only be seen under close inspection. Overall, an outstanding example that will win hearts and trophies at local or national car shows.

Inside, the factory correct black vinyl Strato (code 813) front bucket seats are in great shape, as is the black carpet, dash, doorskins and package shelf. The original steering wheel is present along with the silver center console and floor shifter. There are also the original AM/FM radio and air-conditioning controls in the dash, however, the A/C is inoperable due to a missing compressor. The dash has a working strip speedometer, fuel gauge, odometer and a dual-needle tachometer, which is inoperable. Car comes with genuine 1966 Chevrolet Owner’s Manual and Chevrolet Accessory Guide.

This Impala looks mean wearing its correct and extremely sought after Tuxedo Black exterior and it has the muscle to back up its sinister appearance. With this car, you can make a splash at a local show-and-cruise or turn heads at stoplights, day or night…GET OUT AND DRIVE!

This car has 44,571 actual miles on it and is sold as is with a clear, mileage-exempt title. 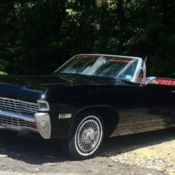 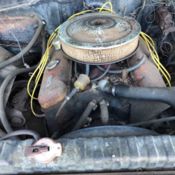 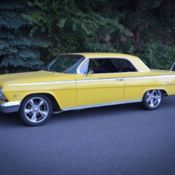 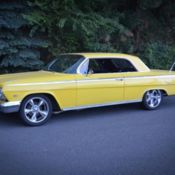 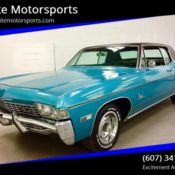 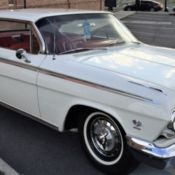 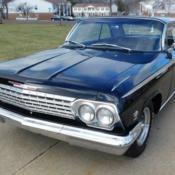 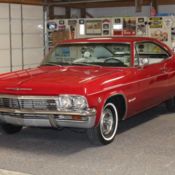 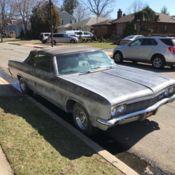 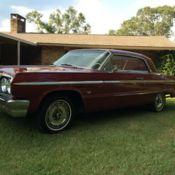