1976 Cadillac Eldorado Convertible Single Family Owned Only 28k Miles From New Well Documented, Hawaii/California/Illinois Car Fresh Out Of 10+ Year Storage, Runs/Drives/Stops Original Paint & Interior, Phoenician Ivory VIN: 6L67S6Q174320 6: Cadillac L: Eldorado 67: 2dr Convertible S: 500ci V8 6: 1976 Model Year Q: Detroit, MI Assembly Plant 174320: Serial Paint: Phoenician Ivory (52) Trim: Light Ivory-Gold Sierra Grain Leather (532) Build Date: Fourth Week of November 1975 (11D) Optional Equipment: Dual-Comfort 50/50 Divided Front Seat (AV7), Carpeted One-Piece Rubber Floor Mats (F), Trunk Mat (I), Cruise Control (C), Door Edge Guards (D), Automatic Level Control (L), Twilight Sentinel (J), Lighted Passenger Vanity Mirror (G) We purchased this â€˜76 Eldorado Convertible from a woman in Illinois whose mother had purchased the car new and had it delivered to her home in Hawaii. According to records, the car served as a demo vehicle in Virginia for the first four months and 9k miles of its life, then went into retail sale in Hawaii in late March of 1976. The original owner subsequently gifted the car to her daughter in 1980, then the car moved with her to California in 1983, and again to Illinois in 2001 when she married. The car spent the early 2000s as a special occasion driver, then was finally parked for the last time around 2010. This car has been kept in a nice, dry garage and remains extremely original with just 28k actual miles. Since removing the car from extended storage we have replaced and color-matched the front and rear filler panels, thoroughly detailed the car inside and out, and replaced the battery. As this car has been off the road for some time, about ten years according to the long-time owner, it should be gone-through prior to becoming a routine, relied-upon driver. As of now the car does start, idle, stay cool, drive straight down the road, shift smoothly, and brake relatively well. To-dos before regular exercise should at least include flushing the old fluids and replacing the old, dry-rotted tires. The Exterior: Paint is original throughout with the exception of the driverâ€™s front fender. We put a paint gauge on every panel and found readings of 2.2-2.7 throughout, with the driverâ€™s front fender reading between 5.5-7.5. There is no body filler on this carâ€”it passed the elcometer test with flying colors. Paint is very nice overall, but isnâ€™t without fault. There are a number of storage-related chips/nicks, almost all located on the front fenders and edges of the hood. Please take a look through the photos, as these are shown close-up. There is surface rust along the inner creases of the hood, so only visible with the hood open. Glass is all clear and crack-free. Hubcaps are good not greatâ€”the passenger rear one is slightly dented, all have some chips. Tires need to be replaced straightaway. Dry and old, and one of the rears only holds air for a day or so. Powered convertible top is fully functional and in nice shape. Interestingly enough, looking at the 52R color code on the trim tag, the current color-matched convertible must not be original. The 52R code would indicate a Phoenician Ivory car with a dark green blue topâ€¦.very oddball combination. Not surprising that it must have been swapped for an ivory top at some point. Doors all open and close nice and smooth, soft close trunk is functional. The Interior: Interior is pretty impressive. Carpeting is nice with the exception of a dark spot under the gas pedal. Leather is in excellent shape, though there are a few scuffs on the center seat in the rear. Seatbelt straps are a bit discolored. Dash top is very nice, no cracks or damage, but the black face just below the dash top does show some chipping in the driverâ€™s corner (see photos). Door panels are in great shape, though the driverâ€™s side does show a little discoloring where the driverâ€™s elbow would rest. Power windows are all functional, power locks are functional, interior/dash lights all good. Lights and signals are all good. Radio is functional but the power antenna is not. Blower is good. Air conditioning is still on R12 refrigerant and is not functionalâ€”the compressor does not kick on. Wipers are good. This car does have cruise control but I have not driven it outside the city and therefore have not been able to test functionality. Under the Hood/Underbody: Please take a look through the underbody photos. Underbody is rock solid. Nice to see. This car was undercoated when new and it served its purpose. This car was in Virginia for four months, Hawaii for four years, California for twenty years, and Illinois for twenty years (rarely driven, dry storage), so it has been in dry climates for most of itâ€™s life. The car does not leak oil, and shows no signs of underbody damage. Since taking the car out of long-term storage we have put a battery in it and replaced the radiator cap as coolant was seeping from the cap. Nothing else. Gasoline must be 10 years oldâ€¦.the car doesnâ€™t stutter (doesnâ€™t seem to have crap in the tank), but does â€œdieselâ€ upon shut-off, indicative of old fuel. Fluids should be flushed and tires should be replaced before any real driving happens. As this car has been well-stored, electronic systems are in good order, it will just need the typical fresh-outta-storage mechanical going-over. Car will come with a good bit of documentation, including the original warranty booklet with delivery info, owners manual, the original inspection from late 1975 when the car arrived in Virginia with only 2 miles on it, the Hawaiian inspection report when delivered there, registration cards all the way back, both the Hawaii and California license plates with stickers. For additional information or to discuss purchasing, please reach out to Jake at 773-273-8257. 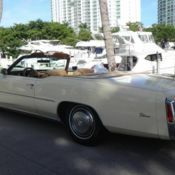 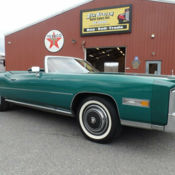 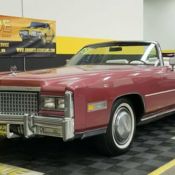 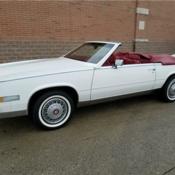 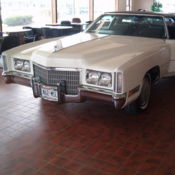 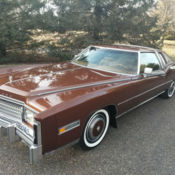 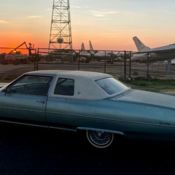 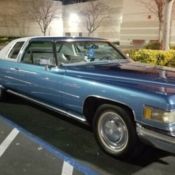 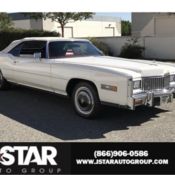 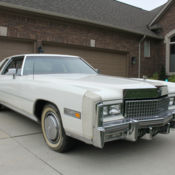