For virtually every make and model of collector car, there is one year that is considered the "best" and the most collectible. For 7th gen Cadillac Eldorados, it is unquestionably the 1976. The Eldorado was given rectangular headlamps, full rear wheel openings withoutfender skirtsand overall crisper lines which resulted in a much sleeker appearance, reminiscent of the 1967-70 models, which are milestones in Cadillac styling, although they lacked a convertible model.

1976 was announced as the final year for the Eldorado convertible and the car was heavily promoted by General Motors as "the last American convertible". Having received a major facelift the previous year, the 1976 Eldorado received only minor styling changes, including a new grille and revised taillamp lenses. Not surprisingly, many purchased as investments.

By popular demand, Cadillac reintroduced the Eldorado convertible for the 1984 model year, but it was a completely different car, nowhere near the stature and majesty of the '76. As a result, the 1976 has remained a true testament to "the end of an eraâ€.

The term "land yacht" might well have been coined for this last American convertible. The overall length is 224.1 inches (18.675 ft). Curb weight tipped the scales at a full two and a half tons (5400 lbs!).

The Eldorado's front suspension was by torsion bars, while the rear used load-leveling air springs, as this generation car was all about a smooth ride. Indeed, the 1976 Cadillac Eldorado rides like a cloud. Braking is via (new for '76) four-wheel discs, which reduced stopping distances and fade. As an aside, disc brake versions of classic cars, like the mid-year Corvettes, are far more valuable than their drum brake predecessors.)

Under the long hood is an appropriately gargantuan engine: 8.2 liters, a full 500 cubic inches. Until quite recently, this held the distinction of being the biggest engine ever offered in a postwar production car.

Despite factory mods to improve fuel economy,Motor Trend's July '75 test of a 1975 Cadillac Eldorado (with the same engine as the '76) took 10.9 seconds to reach 60 mph, not too shabby for such a behemoth, and she runs on Regular gas.

THE BACKGROUND ON THIS ONE-OWNER, LOW MILEAGE CAR

This is a genuine one-owner car wearing its original Phoenician Ivory paint and matching interior, showing only 60k miles. Even the carpets are original and beautiful!) All books and records come with the car, including a clean "A" title, as well as a collection of original literature ranging from a Shop and Owner's Manuals to factory brochures. Nothing has been altered from stock, and the detailed engine compartment and trunk reveal that nothing has been tampered with; it's all bone stock, and collector survivor quality.

These 7th gen Eldos have finally come into their own. They are a testament to a time when bigger was better, when nothing was too extravagant, and when quality really mattered. Whether you consider it as an investment (prices are climbing and the '76 Convertible is the absolute Best of Breed), or as a super fun way to cruise in the lap of luxury with your friends or significant other, this 1976 Cadillac Eldorado is surely the way to travel in old school style. 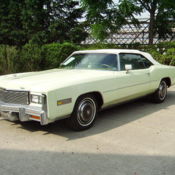 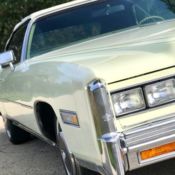 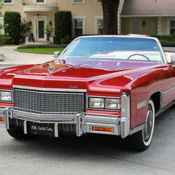 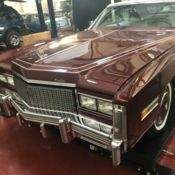 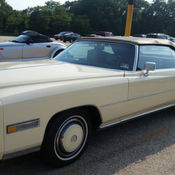 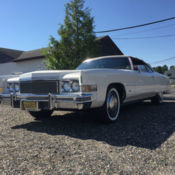 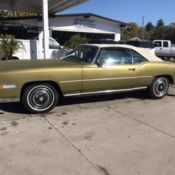 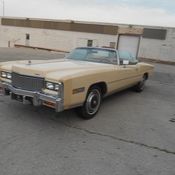 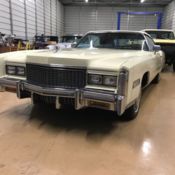 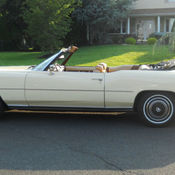