1977 Buick LeSabre Custom, ith 49k miles. Original and unmodified to the best of my knowledge. The 403ci Oldsmobile engine is original and has the original and freshly rebuilt Rochester Quadrajet four barrel carburetor with a three speed automatic transmission that shifts smooth and crisp. I personally have always been leary of most people's so-called "rebuilt" carburetors, ut this one is the exception. I was having typical carburetor related symptoms in this car so I took it to Mid Southern Restorations in Cookeville, N to have them take a look. The owner of the shop told me he sub lets all carburetor work to Allstate carburetors in New York and has had excellent results with them. They have any and all discontinued carburetor parts and all reference numbers and specifications available. The carburetor was sent off to the specialists and came back absolutely pristine and shining like brand new. The carburetor was reinstalled along with brand new and properly routed vacuum hoses. Needless to say, he car starts and runs perfect now. After the carburetor install, id Southern fabricated an EGR valve block off plate, o no more old 1970's emissions stuff to deal with. A couple weeks before the car was taken to Mid-Southern restorations, n old seal or hose in the air conditioning system was dry rotted and broke, etting all of the original R-12 refrigerant out of the system. While the car was at Mid-Southern I had them take care of any and all air conditioning problems and had the compressor and drier replaced and the system properly evacuated and recharged with R-134a. It now blows cold again. Interior is beautiful and doesn't seem to show any wear or age. Absolutely no cracks in the dash and the paint is very glossy, lthough it is difficult to show in photos because of the color. The vinyl top is an 8 out of 10 with no tears or cracks and is still glossy. In the trunk there is a piece of new old stock aluminum trim for the wheel wells in the original plastic, lthough the current trim on the car looks fine. The car has no power locks, o power windows, o passenger side mirror, o reclining seat function at all (yes, he seat backs are FIXED), o tape deck, o rear window defroster and no intermittent wiper function...these were all options in 1977 and they were not purchased. It's basically the biggest motor available and an air conditioning, nd it's awesome. Every single thing on the car works the way it should. I would not hesitate to take this car anywhere in the country right now. The car has the original floor mats and has the original Buick clip-on mirror on the passenger side sun visor. This vehicle was purchased brand new at Curtis Pontiac Buick in Lenoir City, N (the dealership sticker is still shining like new on the trunk lid) and was garaged by an elderly woman and has been kept in East Tennessee for it's entire existence. She has since passed away and I purchased the car from a mechanic who bought it from the original owner's son, aking me the 4th owner. The car has a few minor nicks in the paint but overall is in excellent condition and doesn't need any work unless you are insanely picky. I have the owner's manual, ll 4 original keys plus a spare key in a small wallet provided by the dealership when the car was purchased new. It's like a time capsule.
NEW PARTS:
New fuel pump
New alternator
5 brand new tires, ncluding spare
New brake rotors, ads and fluid
New power steering pump hose
Belts tightened
Transmission pan dropped, ew filter installed with new gasket and fluid
Fresh oil change
Paint has been buffed and polished to a nice shine by Knox Details in Knoxville, N (Check out their website to get an idea of the quality of work they perform)
New wiper blades
New bumper fillers for the rear corners (not installed)
New headliner, rofessionally installed by Brown's automotive upholstery in Clinton, N
Imperfections:
I have taken photos of any blemishes or imperfections to document the good as well as the bad so the buyer is 100 percent informed.
The plastic belt holder for the female end of the seat belt on the driver's side has broken in half, s shown in the photo. It does not in any way affect the usability or effectiveness of the seat belt.
The seat on the driver's side has a little spot where you can see the foam, ut it's underneath the backrest and you can't see it just looking at it. You need to dig around to find it. Shown in photo.
Some small rock chips around the grille
An area of paint that looks like something spilled on it and discolored it. The paint is also cracking a little in that area so I'm wondering if it wasn't brake fluid. It's on the front of the car on the driver's side corner. Shown in photo.
The material on the sun visors is baggy, ike when a headliner needs to be replaced. I asked if they could be refinished when the headliner got done and the guy said there was no way that he could think of to do it. Shown in photos.
The rear corners of the car are missing the bumper filler. I have new fiberglass replacements that have already been painted to match the vehicle color and they will come with the car. I do not have access to tools or a garage at this time so they will come with the car but they will not be installed. It isn't a difficult job, t's just something I can not do at this time. Can be seen in the photos. 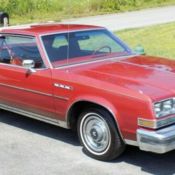 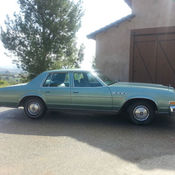 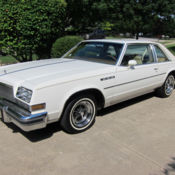 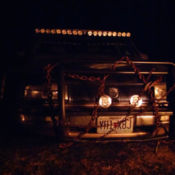 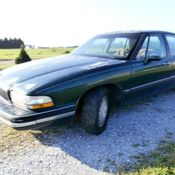 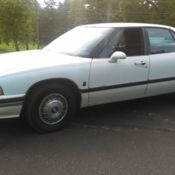 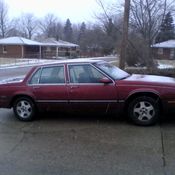 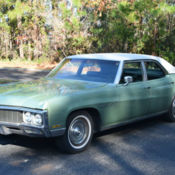 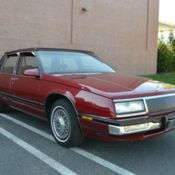 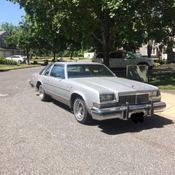