Where to start on this gorgeous piece of Detroit muscle? Here's a little information on the car and it's history:

In 1968 and 1969 Buick offered the GS 400 in a convertible and hardtop model. Standard issue of the GS 400 was a 400 cubic inch (6.6L) engine (with likely lower stated horsepower rating to keep insurance premiums lower) of 340 horsepower (350hp stage 1 ) and 440ft. lbs. torque, a four barrel Rochester Quadrajet carburetor, dual exhaust, 2.93 standard gear ratio optional ( limited slip differential, (3.64 stage 1 option, 3.42 with A/C ), and the available three speed turbo Super Turbine 400 automatic transmission (revered as the finest automatic transmission ever built, and commonly called Turbo Hydramatic 400), U-shape Hurst (automatic transmission) shifter and linkage, located on a center console. A 1968 or 1969 GS400 equipped with the TH400 auto transmission was faster off the line than many of its contemporaries thanks to an unusually "low" 1st gear. Shift pattern for the TH400 from most forward position is Park, Reverse, Neutral, Drive, Second, First. A standard 3 spd or optional 4 spd manual gearbox was also available. Compression ratio on this engine was a very sensible 10.25:1, which allowed for the use of any grade gasoline to be used in normal driving without pinging. The factory air cleaner was covered with a large round chromed cover, secured with a wing nut. The small air scoop behind the hood hinge-line on the 1968 model was fake, although it could perhaps technically be called functional, as it could have bettered the air flow available to the climate control system.

So we have a Quasar Blue hardtop with black vinyl top and black interior. This is a real Buick GS400. It has been completely restored. The drivetrain is: 1972 455 with 1969430 heads, B4B intake, T/A performance 413 camshaft, the engine is fresh and TOTALLY rebuilt. Transmission is TH400 also totally rebuilt and fresh rebuilt by a local company called Coan transmission (look them up, they are the best). Rear end is a posi-trac 10 bolt with 3:23 gears and again is totally new and fresh. Dual exhaust with turbo mufflers are new and give that awesome sound. Factory power steering and factory power drum brakes are all new as well.

Interior is the beautiful black with buckets, console, that super cool U-shaped "Hurst" shifter and power windows. YES, POWER WINDOWS! Along with the purchase will come the factory AM radio, but this one has been upgraded to a very nice aftermarket head unit that has all the bells and whistles including Bluetooth.

The body has a super slick Quasar Blue base coat/clear coat paint and a new vinyl top was installed as well. New redline tires wrapped around the iconic chrome Buick sport wheels.

EVERYTHING works as it should on this car! Courtesy lights in the interior, back up lights in the rear, hell even the factory buzzer sounds if you leave the key in it! There are NO disappointments here! Its all fresh, its all new, it rides and drives like it! Call me to see this car 765-252-9914 John 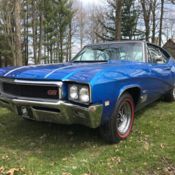 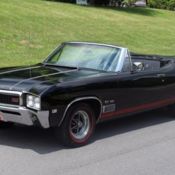 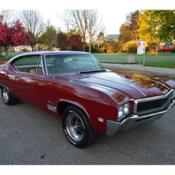 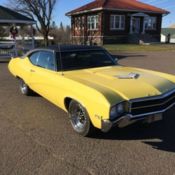 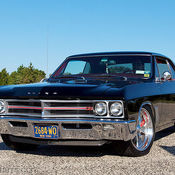 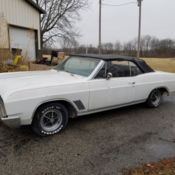 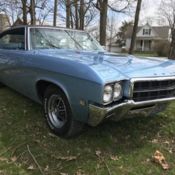 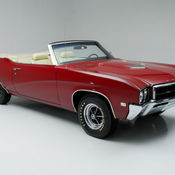 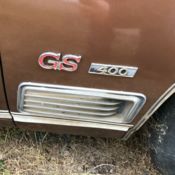 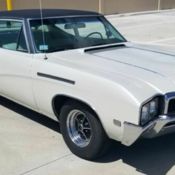