Wouldn't you really rather have a Buick? MotoeXotica Classic Cars hopes to interest you in this particular Buick, a 1969 Electra 225 Custom Sedan. If you’re looking for a Motown-era car to cruise around in with the whole family, look no further as this one offers lots of possibilities. This particular example was built in GM’s Flint, Michigan factory and offers power steering, power brakes and functional Air conditioning that blows cold.

Finished in Polar White, this car’s paint and trim are in overall good condition but there are some blemishes visible upon close inspection. The glass panels are likewise in good overall shape, with mostly clear and crack-free surfaces, however, there is a small pit in the windshield. The vehicle’s lights are in good order. The car rolls on whitewall radials with factory hubcaps and all look good. The chrome bumpers look good on this survivor and its body panels are straight and solid. It’s interesting to note this model has the vinyl roof-delete option, an uncommon touch from an era when vinyl roofs grew in popularity.

Under the expansive hood is a 430 CID V-8 engine, sporting a four-barrel carburetor and a 10.25:1 compression ratio and it is mated to a Turbo-Hydramatic 350 three-speed automatic transmission.

Inside, the car’s original green cloth and vinyl interior are in decent condition, as is the matching carpet but does show some age. The instrument panel has some blemishes visible near the top center. The original two-spoke steering wheel is present and in fair shape, as are the inner door panels, mirror glass and shift lever. Rounding out the inside is the factory Sonamatic AM radio. This is a great car to throw the whole family in and go out cruising and not have to worry about it!

The year 1969 brought a major restyling to the Electra 225 and other GMB-bodyandC-body cars with somewhat crisper bodylines than 1965–68 models but continued with the same chassis and inner body structure introduced with the 1965 model, however the wheelbase was increased one inch to 127 inches. The 1969s were also the first to offer headrests as standard equipment due to a federal safety mandate and the steering column with ignition switch that also locked the steering wheel with the transmission in "Park," a feature found on all 1969 GM cars before it became a federal safety mandate in 1970. Also new was a variable-ratio power steering system combined with revised front suspension tuning called "Accu-Drive." Other changes included vent-less front windows.

Standard finned aluminum drum brakes were offered and were effective. The Bendix four-piston disc brake units were available. 12" x 1" vented steel rotors were coupled with the cast iron caliper assemblies. Dual exhaust was available as an option. Available gear rations were - 2.56 economy as well as 2.73, 3.08 and 3.23. A special PX-Code "AC Delete" 3.91 performance gear option was available.

This car is currently located at our facility in St. Louis, Missouri. Current mileage on the odometer shows 44,814 miles. It is sold as is, where is, on a clean and mileage exempt clear title. 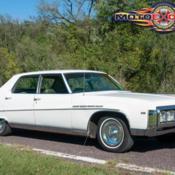 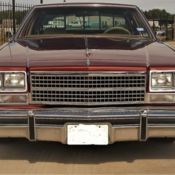 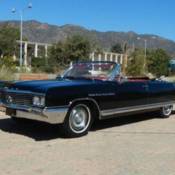 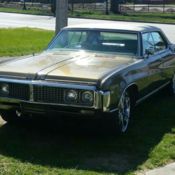 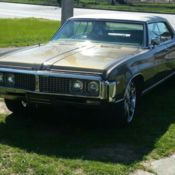 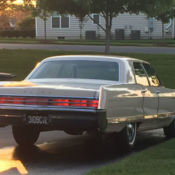 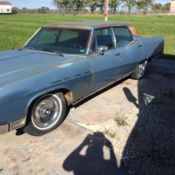 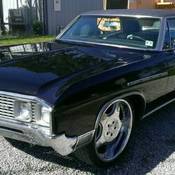 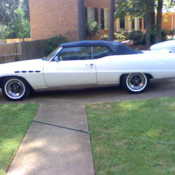 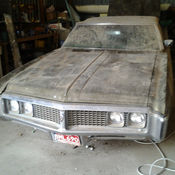