This Austin-Healey 100-6 BN4 is a US-market example that was with its previous owner for almost 40 years. The car was built in Abingdon in January 1958 shortly after production moved from Longbridge. It was delivered new in Jacksonville, Florida and restored in the 1990s. The 2.6 liter straight-six is pair to a 4-speed gearbox and was rebuilt around 10 years ago. In preparation for the sale, the selling dealer added a stainless exhaust and new wire wheels, refreshed the interior, and rebuilt th...e braking system. The car is optioned with a heater, safety glass, wire wheels, and overdrive according to the included British Motor Industry Heritage Certificate. A blue soft top and side screens are included along with a collection of records from the previous owner detailing maintenance and restoration. The car is sold with a clean Oklahoma title. This BN4 was repainted in 1990s in white over blue, which is the original color combination per the Heritage Certificate. It has been driven and shown at many Healey events, and the finish shows well with few visible flaws. Chrome wire wheels are new replacements and wear BF Goodrich Control tires. The Interior was recently redone in correct materials with new carpeting, seat covers, and steering wheel. The installation looks to be of high quality, with a good fit on all surfaces. The 2,639cc straight-six is said to be original and is fed by twin SU carbs. In 1957, the BMC C-Series engine was improved with a revised intake manifold and a 12-port head for a 117 horsepower rating from the factory. It is said to have been rebuilt around 10 years ago and runs well. The transmission is a 4-speed manual equipped with optional overdrive. The seller notes that the shifting action is a somewhat imprecise, though there are no accompanying mechanical noises. The underside is covered with a layer of thick black paint or undercoating that has worn off in places. The floor pans appear solid and the frame shows no evidence of serious corrosion. The new stainless exhaust can be seen above. The seller notes that the braking system was completely rebuilt prior to the sale. 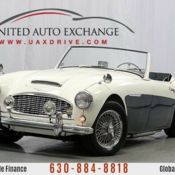 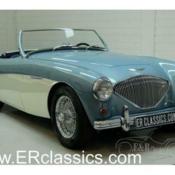 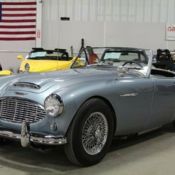 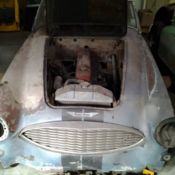 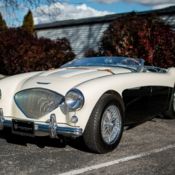 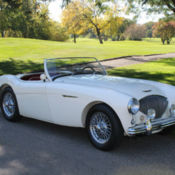 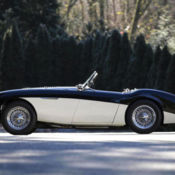 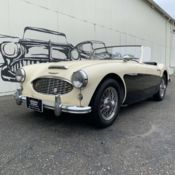 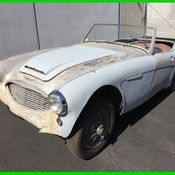 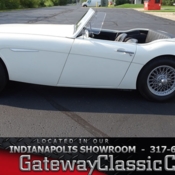