I bought this car at an estate auction. I have very limited information on the car. It is a 1985 Audi, brown in color, 5000S. The information that I received is that the car has been garage kept its entire life and that it has not been driven for years. The gas tank ruptured at the seam spilling gasoline all over the garage floor. The car continued to be kept in the garage but was never repaired. The couple that owned it were getting up in years and they had other vehicles to drive. The mileage shows just under 47,000 miles on the odometer. I bought the car in hopes of getting it running and driving it. I did remove the fuel tank, hooked up an electric fuel pump from a gas jug and tried to start it, the key turned, lights came on but would not crank. I crawled under the car and shorted the starter solenoid and it cranked right over. I have tried to get information online for the car but had no luck. I don't know why it will not crank with the key. Possibly a starter relay, possibly a built in safety feature that I am unaware of. Possibly something else. There is a key pad of some sort on the driver side door panel. Possibly a code has to be entered, I don't know. It is a really nice looking old car. It does have several paint transfer points over the car but I believe most of them can be fairly easily removed. The interior is in good condition, the exterior may have little dings, nothing major. I have given up on it. I don't know of anyone locally who knows enough to check it out and work on it and I refuse to take it to an Audi dealer. I don't think the engine cranking could be a serious issue but I can't figure it out. I know nothing about the engine or transmission or for that fact, anything about the condition of the car. The fiberglass spare tire pan in the trunk is broken and missing. Other than that and a battery, I believe the car to be complete. The car has been parked under a large ash tree and the birds have been pretty active leaving their marks on the car. There appear to be tape residue on the top of the car around the sun roof. It may leak but the car has been sitting out for a couple of weeks through some pretty hard, prolonged rains and the inside has stayed dry. The small piece of upholstery on the inside that covers the sun roof door is loose. The title has been signed by the owner, I have not filled in the buyer information so it is an open title. I make absolutely no guarantees about this car. If it does not sell I plan to part it out. If you are in need of parts from this car let me know and if it does not sell I will discuss the parts with you. Feel free to make an offer on the car. If I feel it is a fair offer I will end the auction and sell it to you. The car is easily accessible by truck and trailer or roll back. There will be a non refundable deposit of $200.00 due via PayPal within 24 hours of end of auction. If you are in or near Southern Indiana and would like to see it let me know and you are more than welcome to come look at it. It is being sold as is. Again, if I receive a fair offer I will end the auction at that time. Any questions, please ask and I will try and answer them. 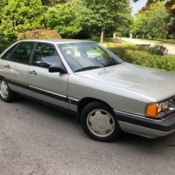