1969 AMC AMX AMX, Hilton, NY Great Lakes Classic Cars 6 Upton St, Hilton, NY 14468 1-(800) 510-3797|(800) 510-3797 1969 AMC AMX AMX The AMX was introduced to the press at the Daytona International Speedway on 15 February 1968; just over four months after the Javelin went on sale. In the demonstrations on the race track, the new AMXs ran at speeds up to 130 mph (209 km/h). American Motors' group vice president, Vic Raviolo, described the AMX as "the Walter Mitty Ferrari".[19] The AMX was designed to "appeal to both muscle car and sports car enthusiasts, two camps that rarely acknowledged each other's existences."[3] The problem was the "tire-melting" acceleration of the two-seater made it "a quick car that handled like a sports car, confusing the buying public."[3]
Automotive journalist Tom McCahill summed up, "the AMX is the hottest thing to ever come out of Wisconsin and ... you can whip through corners and real hard bends better than with many out-and-out sports cars."[14]
The American Society of Automotive Engineers named the AMX as the "best engineered car of the year" in 1969 and 1970.[24]
Equipped with a Hurst shifter and BorgWarner T-10 four-speed manual transmissio, as are special traction bars, dual exhaust system, and fatter tires for better traction. Also the popular "Go-Package" came with the four-barrel 343 engine,which includes power assisted front disk brakes, "Twin-Grip" differential, "Magnum 500" styled-steel wheels, heavy-duty suspension with thicker sway-bars, heavy-duty cooling, and other performance enhancements.
The Javelin and the shorter wheelbase two-door car based on the Javelin, known as the AMX, were introduced in 1968 to huge acclaim. The Javelin sold 55,124 cars, while the AMX added 6,725 to the AMC sales ledger that year. AMC's nearly brand new 290 and 343 cubic inch "mid-block" lightweight engines were on deck and could be had with as much as 280 hp, which provided for more than sparkling performance in the lightweight AMX and Javelin lines.
If the AMX proved anything, it was that AMC could adapt to the marketplace. It was intended to be a rolling statement saying just that to the motoring public, and in that sense, it succeeded admirably. AMC survived until 1987 before being absorbed into, and many say, saving, Chrysler Corporation to live on to fight another day.
Our vehicle is beautiful in brilliant Matador Red complimented by the over the the center white stripe and by clean Mag 500 wheels. The interior black seats,door panels and rugs are all in excellent condition.
Rare remnant of the era with punch and style and available now.
Great Lakes Classic Cars
6 Upton Street
Hilton, N.Y.14468
We offer finance and transport assistance. Appearance InteriorComfortConvenienceEntertainment TelematicsPackageSeating 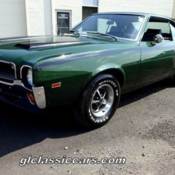 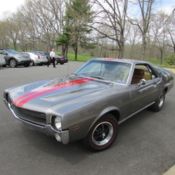 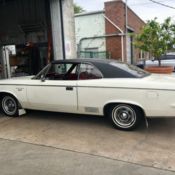 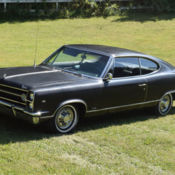 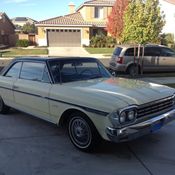 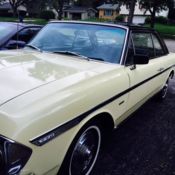 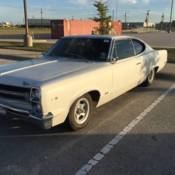 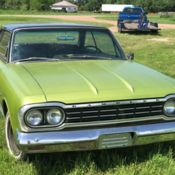 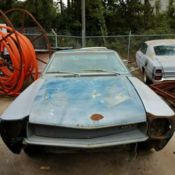 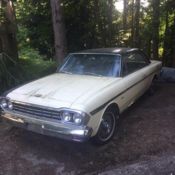