It's a distinctive car in the true AMC tradition that takes its name from its early '50s Hudson relative that raced to victory with frequency back in the early '50s and when introduced, shared no body panels with any other vehicle in its family. This 1974 AMC Hornet is a great example of its manufacturer's unique styling sensibilities and, with its seldom-seen status combined with light usage - only 45,000 miles in its 30+ year life span - it represents a great opportunity to score a rare classic at a good price. While you certainly don't see many Hornets on the road these days, this model lived quite a life back in its day. It not only graced domestic roads, but also ventured to Mexico, Australia and South Africa, as well, and it became a big part of AMC's development efforts, serving at one point as a rolling foundation for their alternative fuel experimentation. It even had the distinction of appearing in a James Bond film ("The Man with the Golden Gun"), which puts it in pretty select automotive company. The hatchback form on display here represents the look the model is best known for and the white hue this '74 wears is not only its original shade, but likely the same paint it rolled off the line with decades ago - even after all this time, it still produces an impressive shine. It also remains a well-aligned car -there are nice, even gaps around its doors and hood and the deluxe-sized hatchback sits very level with the rear fenders in back. Unlike so many of its '74 classmates, all of its badging and trim is also presented and accounted for and looks to be in pretty solid shape. The blue interior - a mix of cloth and vinyl - has come through the years in strong fashion, and a little bit of cleaning will have it looking its best. You won't find any tears on either the front or back bench seats, and both appear to have plenty of life left in them. An expanse of blue carpeting also showing no serious blemishes runs underneath. The original steering wheel still sits in place, and just beyond it, you'll find a very clean dash area, with a set of gauges in the textured instrument cluster that are still very readable behind their clear lenses. The original AM radio occupies center position and a pad free of any tearing sits on top. In back, a pair of struts secure what has to be one of the larger rear hatches you'll come across, and with it raised, you'll see that the generously sized storage area in back is in good shape and lined with fresh-looking blue carpeting. Unlike many of the cars of this era, the headliner on this Hornet still fits snugly in its intended position. This '70s compact is equipped with air conditioning that, with some well-focused attention, will have it up to speed to keep you and your passengers comfortable on your journeys. Underneath the hood you'll find a 258 cubic inch inline six cylinder sitting in a clean engine compartment. It teams with a 3-speed automatic transmission and impressively responsive power steering to make driving this Hornet a low-effort affair. It's a one of a kind, nostalgia inducing classic that's sure to turn heads and conjure up images of a simpler but pivotal time as it cruises on its set of 14" stock wheels that feature distinctive, spoon-shaped contours and are wrapped with Hankook tires up front and Goodyears in back. This 1974 AMC Hornet offers genuine collectability and unique vintage styling at a good price. Call today! 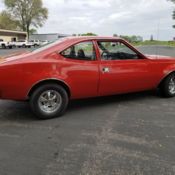 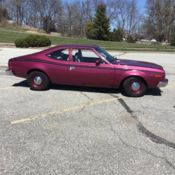 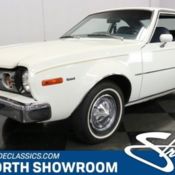 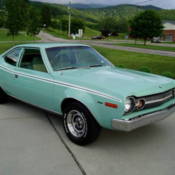 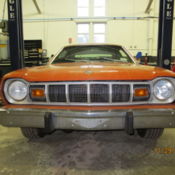 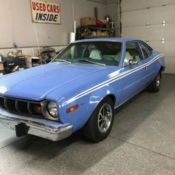 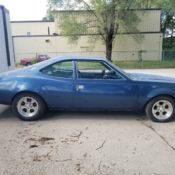 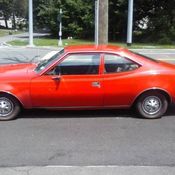 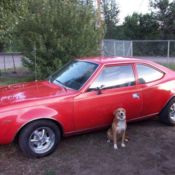 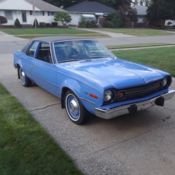