Native northern Cali VW bus! Spent most of its life in the Sierra region of California. First in Truckee with original owner, then North San Juan, and now Nevada City, California with me. Beloved and modified for family road trips by original owner. Has original paint color known as "Sierra Gold". This bus runs great, and is road trip and camping ready!!!!

The Volkswagen Bus's got a boost for 1971 with the introduction of front discs and a 20-percent increase in the lining thickness of the rear drums. VW also installed a regulator in the rear brake circuit that functioned like an early anti-lock system to help prevent premature wheel locking in hard stops. Wheel width also increased by half-an inch, to 5.5 inches

Engine: Porsche 914â€”A Later design engine, which is a VW designed engine that Porsche used, known as a â€˜pancake/suitcaseâ€™engine. The engine is solid with modifications and runs strong.

-Rear and front brakes in good shape .Front and rear brakes service in 2017.

-Much more safety and driveability on freeways than stock engines, as it goes much faster. Could use some minor tuning to be perfect.

-Has slot for slide-in stereo.

-Sunroof/Moonroof to let in air on a hot day for cooling, and to see the stars at night!

-Rear seats slide out to make big bed stand, right under the moonroof to watch the stars!! Big enough for a couple/family.

-Front seats are newer vanagon seats installed. Original seats are ripped but available and comes with vehicle at no extra cost.

-Front additional bumper is detached and not shown in pictures, also comes with vehicle at no extra cost.

-No smog required in CA!!

-Not urgent, but coulduse new battery cables and ground strap (about $50-$70 parts).

-Light truck (LT) tirescould make this feel even more stable than it already is.

-Not paint ready, as it needs some body work on the front dent before painting, and the cooling vent would need to be polished.

-Dent in the front.

-Some exposed wiring from ignition area to second gas tank.

-Odometer broken since me and previous owner owned the car.

Other considerations just noticed (updated 11/12/19):-Hairline crack in front upper windshield from small rock hitting it.-Some gold paint starting to show through on the roof exterior where it had been repainted.-Black vinyl liner starting to come off of the inside sliding door--just needs glue. 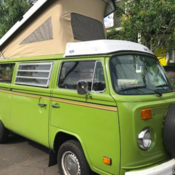 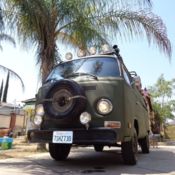 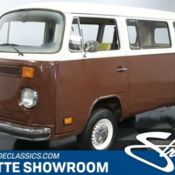 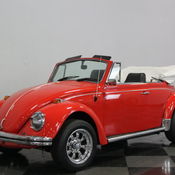 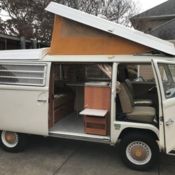 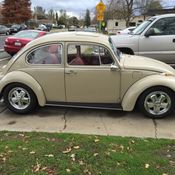 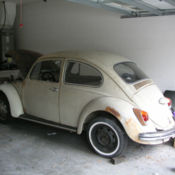 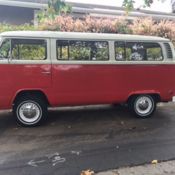 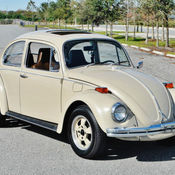 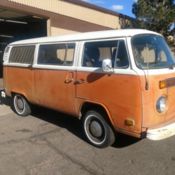