The odometer in the car is not the original; when I bought her the odometer/speedometer cluster stopped working at 130k. Michael (previous owner who was also my neighbor) did not bother to keep track and really didn't know the actual miles he put on it. However, based on her performance I would say less than 200k. Since this was not my main vehicle, I only drove to my office, which was approximately two miles from my home for a solid year plus knocking around town until I moved. After moving, I drove for the first two years to the beach about six miles round trip a couple times a week and to the bike trail as well, four miles round trip.


I had her stored for six years until I moved out of state. So, all together I can honestly say that I put at most 5k miles on her.

I found a replacement cluster on Ebay that had about 214k that came out of an 86 Volkswagen GTI (I have receipt). So, the current odometer reads 217k. However it too has stopped working. It should read more like 219k. However, the VIN report states differently, I am sure this is due to when I was registering it they were guessing.

The engine is sound and runs well. I just replaced the water pump & housing as well as had the exhaust leak fixed. Throughout the years, I have replaced timing belt, alternator, fuel filter, spark plugs (platinum), cap and rotor, spark plug cables, battery, radiator, shocks and struts, front windshield, gas cap, head lamps, and door handles, steering wheel column, and starter. I'm pretty sure I had the clutch replaced (I can't remember) and the upholstery.

The air conditioner was not working at the time of purchase. Since I did not need it, I could not justify spending the money to fix it.

The body is straight and has never been in an accident (including the bumpers). However there are some very minor dings on hood that you have to really look to see. In the front behind the bumper there are some rock chips. On the passenger door there is a rust spot about the size of a penny. The paint is original and has no oxidation. I always kept it covered, rain or shine (car cover included). Side lights are showing some cracks, but I have a complete replacement set, which will be included.

The top and lining should be replaced. If you do not want to replace it right away and won't be driving in heavy rain you should be okay. As shown in photo, I patched it with silicone which has worked well. The sun top is awesome, especially on hot days. It can be removed if you do not want it.

The tires are in like new conditions, no dry rot at all. I purchased them in 2014. Probably have less than 300 miles on them

The seat backs don't flip forward by the knobs due to the cables not functioning properly. Also, I cannot find the passenger seat handle/knob. See photo (If I find it, I will send it to you.)

I had a hitch installed so I could carry my bicycles. It is in sound, solid condition. Note: This is not a towing hitch and cannot be used as a trailer hitch!

Passenger exterior door handle: It's an aftermarket replacement. When I first put it in, two years ago it worked great, I think it has shifted because now it won't open the door, it probably just needs readjusting.

The antenna is broken and the stereo needs adjusting or something because it wont turn off. When not driving car remove face plate to avoid draining battery. To be honest I don't remember how to work it.

Overall, this car is in good-excellent condition. I would trust it driving long distances.

If you buy this car and something is wrong with it other than what I have mentioned here, then I did not know about it.

ALL SALES ARE FINAL SO, PLEASE ASK QUESTIONS BEFORE BIDDING! 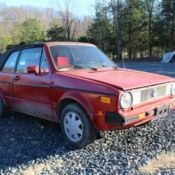