Have you been waiting for that perfect roadster that is not only a collectible show car, but you wouldn't be afraid to drive it as well? Your wait is now over with the car you are about to read about now; a beautiful 1973 Volkswagen Karmann Ghia Convertible. Even though this is a restored car, the owner has paid extraordinary attention to keep it as original as possible. For example, when he purchased it from the second owner 8 years ago, the charcoal canister had been removed from the engine compartment. Most people wouldn't pay any attention to this detail but he replaced not only the canister but the bracket and the correct hoses for the year. Because of this attention to detail is probably why this car has won numerous first place awards at car shows including the largest VW Festival in the region at Eureka Springs, Arkansas.

Beginning with the engine compartment, even though it doesn't retain the original engine block, it is a factory Volkswagen replacement as indicated by the "VW" symbol, the letter "Dâ€, then the engine number. This ensures that it is a top quality engine with many miles of service left and because of it being a true VW block, when the time does come for a rebuild you will have a solid block to start with. Even though the exact size of the engine is unknown due to lack of documentation from the previous owner, the power felt when driving the car is an indicator that it may have upgraded to a size larger than the stock 1600cc but we can't say for sure. The transaxle and clutch work perfectly with smooth shifts, quiet operation, and no problems popping out of gear making this car an absolute pleasure to drive.

Staying in the engine compartment, you will see new all new spark plugs, plug wires, distributor cap, rotor and points all connected to a new "009" distributor. In order to match the ignition for the best performance, the carburetor is a new Solex H30/31 sitting on a new middle section of the dual port intake manifold fed by a new mechanical fuel pump with all new fuel lines. The stock oil bath breather and connecting hoses have been restored to excellent condition for optimum air flow making this car run and drive as good as it looks. It has new new fresh air hoses connected to new heater boxes along with a new engine compartment seal and engine hood seal making sure that not only does the engine run cool but that the heat works great with no dirty road air getting into the cabin. A new German manufactured stock muffler with custom chrome exhaust tips match the bright chrome rear bumper that protrude just far enough out for that perfect look. Due to some acid damage from the battery being placed in the engine compartment on these cars, he had the rear apron and the battery tray replaced so the entire area has been repaired as good as new.

The wiring harness has been 95% replaced with all new wiring coupled with a brand new (not rebuilt) Bosch alternator ensuring trouble free electrical operation for the lights and accessories. All of the headlights, taillights, brake lights, blinkers, windshield wipers, and dash lights as well as a new Retro Sound Stereo work as they should.

Moving underneath the car, you will see a new complete front axle beam sporting all new front disc brakes including new rotors, calipers, and pads as well as new rubber brake hoses. The rear brakes are all new as well with not only new brake shoes, but the drums, wheel cylinders, and the rubber hoses are all new. The new CV joints deliver reliable power to the rear wheels and new shocks on all four corners along with new Coker Classic wide whitewall tires give just the right stiffness for cornering without being too harsh. The floor pans, tunnel, and frame head are all in excellent condition with just a spot or two of surface rust where the paint has chipped off due to being driven. Yes, the owner not only shows this car, but drives it as well.

The interior is in excellent condition with new high quality carpet, new door panels, new knee bump piece (on bottom of dash) which was missing. The dash is in excellent condition as well as all the gauges, knobs, and switches. There is a minor issue with the ignition switch but it has been made reliable by adding an additional button in the circuit. The original seat covers were in such good condition that the owner decided he would rather keep them on the car than replace them with something that might not turn out as good. Because of this fact, there is a small tear by the back release knob on the driver's side. Both windows roll up and down like new with new inner window scrapers on the inside and finishing the interior up with a new headliner.

The exterior is what really makes this car stand out with it's eye popping red color and tan top. I can't say enough about the quality of the paint job on this car and pictures don't do it justice. It has been 5 years now since this car was painted but it looks like it was done yesterday partially due to the fact that it has always being garaged with a humidifier. You have to see it in person to truly experience the show quality finish with the perfect balance of gloss and shine. It makes sense though because the person that painted the car has shown cars and won awards for paint jobs at the the nationally recognized SEMA Show held annually in Las Vegas, Nevada. Even though the color isn't the car's original shade of red, it is still a VW color derived from a Scirocco in the mid seventies and could not have turned out better. At some point in its life, the tan convertible top has been replaced but not by the present owner. However, it is in excellent condition and still has the original glass rear window! The boot cover is in excellent condition as well as the top frame so there are zero issues when raising and lowering the top.

In summary, not only does the condition of this 1973 VW Karmann Ghia Convertible make it stand out but also the rarity factor as well because of the low production number of only 2,550 and the unique feature of being the only year that a rear seat was not installed from the factory. Since the car was purchased new in Louisiana and then moved to Arkansas, there is no concern about the integrity of the car structure being compromised due to rust. A person could easily spend double the price of this car to find one and then bring it up to the condition of this one so I don't expect it to last long. This car is located in North Central Arkansas and is sold As Is, Where Is, with no warranty as to condition or safety. Shipping is the sole responsibility of the buyer and a non-refundable deposit of $500 is required to hold this car for pickup. 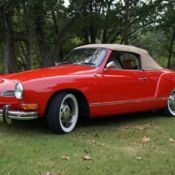 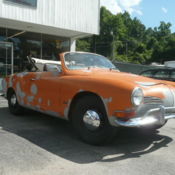 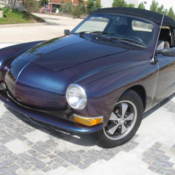 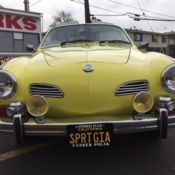 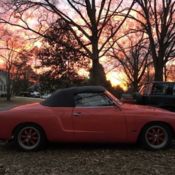 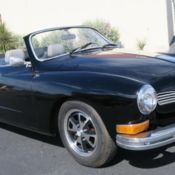 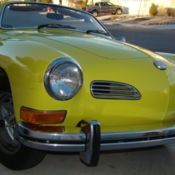 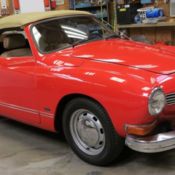 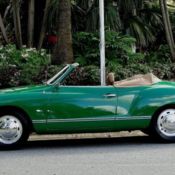 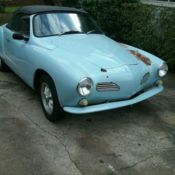