What if we told you that you could have an Italian styled, German built sports coupe for under 15 grand? It's not a joke or a stunt; this handsome black 1972 Volkswagen Karmann-Ghia is an awful lot of car for Hyundai money! These cars aren't getting any cheaper, and with a lot of potential this is a simple, good looking car that's ready to enjoy or upgrade. Read on!
Volkswagen intended for the Karmann-Ghia to move them into a more upscale market than the Beetle ever could, and they contracted famed coachbuilder Karmann to build them a car based on a widened Beetle floor pan. Karmann in turn contracted Italian design studio Ghia to pen the design. Ghia is a full service design house that's no stranger to cars; they designed everything from custom Alfas to the Chrysler turbine cars. These cars are perhaps their most famous work, and this car's a fitting example. The basic black exterior was repainted perhaps 20 years ago, but it's led a pretty good life since then. It's not perfect, of course, but it's presentable and looks good rolling down the street. Karmann-Ghias got a slight makeover for 1970, with new wraparound front and rear turn signal lights, so it's a bit more modern looking than the early cars. Most of the detail parts are in excellent shape, and while the taillights larger than the previous year car's pieces, they did eliminate the horrible round side marker lights that marred the fenders and quarters. The simple bumpers accentuate the no-frills design and tie in nicely with the side trim.
The car was restored in 1997, so the look inside was pretty popular at the time. Those cloth seat covers, matching door panels, and black carpets all have a more inviting look than the original vinyl upholstery and the gray fabric keeps it bright inside. With the extra width over a Beetle the Karmann-Ghia has a far more airy feeling, and it's well-appointed for touring. The extra-large steering wheel makes the car's relaxed purpose clear; the Karmann-Ghia is a boulevard cruiser and not a hardcore sports car, although it doesn't mind hustling now and then. Remarkably, the original AM radio is still in the middle of the dash, and as a VW, that's about the only concession to modernity that it has. There's still plenty of space in the forward-mounted trunk, which is just a mat away from looking right.
Under the engine lid is a familiar air-cooled 1600CC flat four that was rebuilt when the rest of the car was restored in the late '90s. If you wanted a great reason to want a later car over an earlier one, it's in here. With less than 10,000 miles on the rebuilt, it has a fresh tune-up and runs great, and even in stock spec, it's lively and fun to drive. Now, some perspective has to be used here, as the Karmann-Ghia only weighs 1800 pounds, which gives a '72 model about the same power-to-weight ratio as a new Jetta. You're not going to win many stoplight grands prix but the car scoots along at highway speeds just fine. Disc brakes are part of the Karmann Ghia's many virtues, and it looks like the calipers are recent. The floors are extremely tidy and there's a throaty exhaust out back that adds to the fun factor. Custom 15-inch wheels are blacked out to match the bodywork and wear fat Cooper radials that are a couple steps wider than normal.
Karmann-Ghias are cool cars, and clean ones like this don't roll by every day. Call today and take it home! 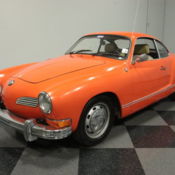 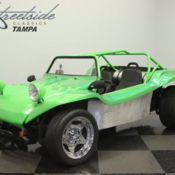 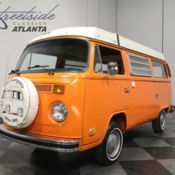 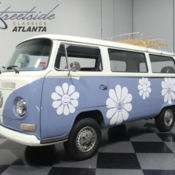 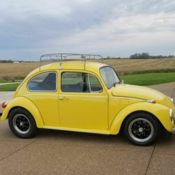 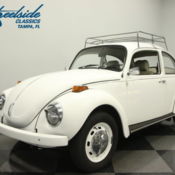 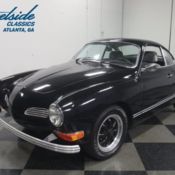 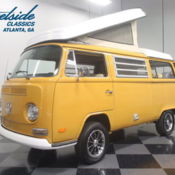 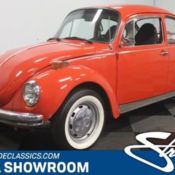 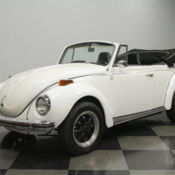