I am selling my beloved 1968 VW camper that I believe was a panel at one time. I have named her Chirp for the sound she makes when accelerating. I have spent a LOT of time and money on Chirp and now she looks as nice as she runs. Sorry I tried but the pictures do not do this bus justice!!

Chirp was bought out of the North Dakota from a guy that flips cars. I was told the PO used the bus as a duck blind, which was evident, by the paint and interior. I was told the PO installed a new engine and only drove the bus from the barn to the pond, where he hunted ducks. He did not know when the last last trip to the pond was but it had been a very long time.

After getting Chirp home (not running) I started tearing her down then she went to paint. Overall the body was very solid with only miner repairs needing to be done around the outer doglegs and battery tray area. She did NOT get a 15 thousand dollar paint job and the paint is not perfect but is still very nice (any nicer and I wouldn’t want to drive her). The engine was found to be in great shape so it was resealed, cleaned and reinstalled with a new clutch package. I installed 2.5-inch drop spindles in the front (done by Franklins) to give her that level look. I put new breaks all the way around followed by new tires and new wide five wheels (less than 500 miles on them).

The inside was very solid but the interior was all home made so in the trash it went. I sourced a full 1969 camper interior from another VW owner however it was completely sun bleached so I had it all refinished in real cheery wood. I also installed new K-molding, new T-molding, new latches/handles and new piping. I have close to 5K in the cabinets alone. I had no idea they would cost that much when I started them, but they do look great. All the interior covering was completed by Sew Fine in Denver Colorado another 3k. I installed a new canvas and seal for the pop-top as well as all the door seals. All new birch panels on walls and ceiling were installed. A new hardwood floor in the camping cabin and carpet installed in the front compartment. The front carpet was glued to an insulating pad and is not glued to the metal floor. The curtains I love and were bought out of Germany. I also have the front curtain to completely enclose the bus, it just look way cleaner with them off. However, they will go with the bus along with all the clips. I also have an OG drive away tent that can go with the bus as well. I know I am forgetting a lot as you can see from the pictures she was treated right.

Chirp gets so much attention when we go out and I love driving her. She runs, drives and stops great. If you would like to give her a good home and have any question or would like more pictures please feel free to give me a call or text my cell is 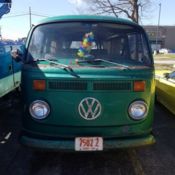 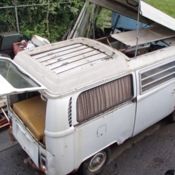 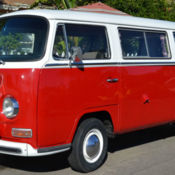 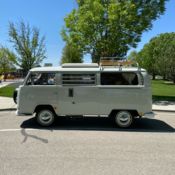 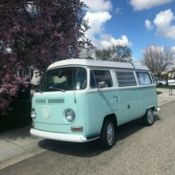 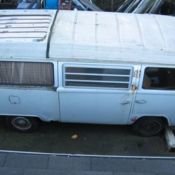 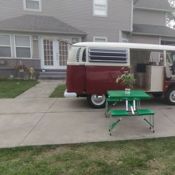 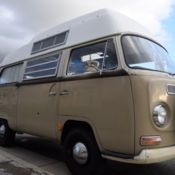 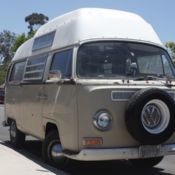 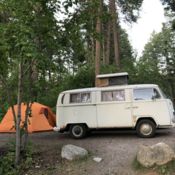