Serious Bidders only . Re-Listed due to DB lser in New Jersey .

UP FOR AUCTION A 1973 TRIUMPH SPITFIRE 1500 ROADSTER. 83,386 ORIGINAL MILES. STARTS, THEN STALLS (CARB LEAKING FLUID) LAST DRIVEN IN 1991. NO TITLE. THIS WAS A PROJECT CAR I RAN OUT OF TIME FOR. IT COMES WITH 4 BRAND NEW ARCHILLES SPORT TIRES . IT WOULDNT TAKE MUCH TO GET THIS BACK ON THE ROAD AGIAN. THE TOP IS IN VERY GOOD CONDITION. IT HAS A SMALL TEAR, BUT OVERALL IN WORKING ORDER. IT WAS LEFT AT A SHOP IN 1991 AND THEN ABANDONED. THE LAST PICTURE SHOWS THE LAST OWNER FROM REGISTRATION . IN THE STATE OF PA TO GET THE TITLE IN YOUR NAME YOU PETITION THE COURTS, THEN RUN AN AD IN LOCAL PAPER (WYOMISSING) 2 WEEKS . THEN HAVE TITLE TRANSFER .

I have mounted the new tires on this vehicle since the pictures were taken .

OWNER REVIEW 1973 Spitfire 1500 — Handling is fantastic, braking is also fantastic. The car only weighs 1700lbs so its performance handling wise is quite good. However power is lacking it maxes out at around 65ish (maybe) horsepower. Interior is good. Black leather seats, wood dash, Smith's gauges; it has it all. It has been said that "when you drive a spitfire, you remember how much fun driving is" nuff said.

BUYER IS RESPONSIBLE FOR REMOVAL AND TRANSPORT OF SPITFIRE. I CAN HAVE THE NEW TIRES PUT ON FOR FREE IF DESIRED. 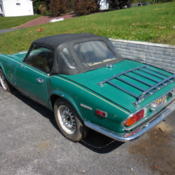 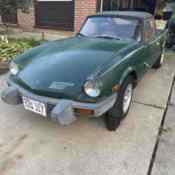 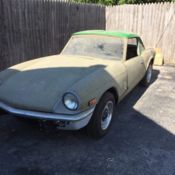 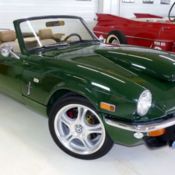 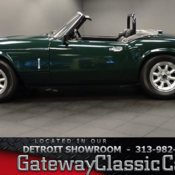 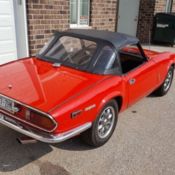 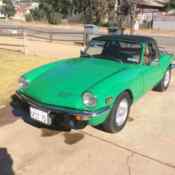 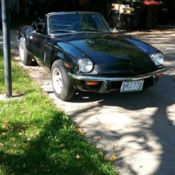 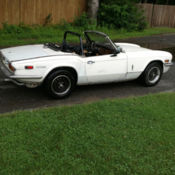 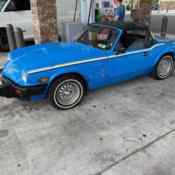