This is a very clean, rust-free and low mile Suzuki Samurai that has lived it's whole life here in Southern Arizona. This little rig was purchased by a ranch owner in Sierra Vista Arizona and used on his ranch most of it's life until it was purchased by a friend of the rancher who also had a small ranch. It mainly was used to rustle up cattle from time to time out on acreage and it had cow horns mounted on the hood. The cow horns were removed by the second owner so that's why you see the three stainless screws in the hood. The mileage was said to be correct as it really wasn't driven many miles through the years being relegated to ranch duty and it was parked in the barn most of it's life. I have no documentation to prove the mileage, only the word of the ranchers that owned it. The only modification on the Samurai is the carb has been changed over from the temperamental stock carb to, what I was told, was a Toyota carb. I have owned many of these Samurais over the years but have never seen one with this particular carb. It runs much better than the stock carb with no issues with idle etc. Other than that one modification this is all original down to the original Kotto headlights. Windows roll up and down and doors lock as they should. Seats have covers over the original seat vinyl material which is pretty weathered. 4WD works great. I purchased this in Benson Arizona and drove it about two hours on the freeway and it did great while maintaining speeds of 65-75 mph depending on the grade. I have taken it through the desert in triple digit heat and it handled it with no overheating issues. It tracks straight and stops well with no shakes or shimmies. Tires have less than 1000 miles on them. The paint is all original and was well preserved over the years since it was usually parked indoors. You will see various minor nicks and scratches and some flaking of the paint on the left front fender on the plastic fender extension. The body is super straight with no dings or dents in it except where the grille guard was pushed into the core support area (see pics) leaving two little creases. I was told this occurred when they were trying to push a fallen tree out of the road after a storm and the grille guard rotated on it's mounts. The original carpet is still in great shape with very little wear noted on the carpet. All lights, turn signals, gauges and horn work as they should. We have decided to sell our home and move further south so we need to sell this little jewel. These are getting harder and harder to come by in this kind of original condition and are going up in value consistently. These make excellent tow vehicles and can fit inside most toy haulers. The climb like a billie goat and sip gas at the same time so they make great trail rigs. Please ask any questions before bidding. There is a $500 deposit due via Paypal within 24 hours of the auction end with the balance due in 7 days. The Samurai is sold "as is" with no warranty implied or expressed. I am more than happy to work with shipper and can store the Samurai for a reasonable time to arrange shipping. 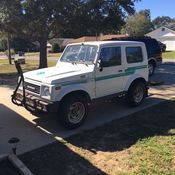 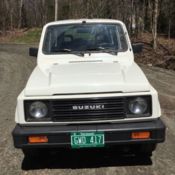 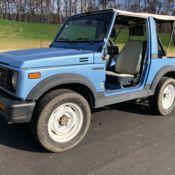 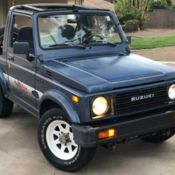 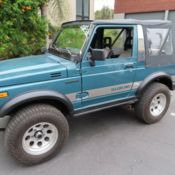 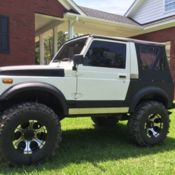 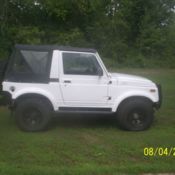 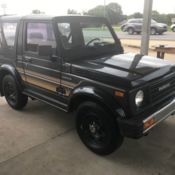 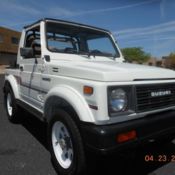 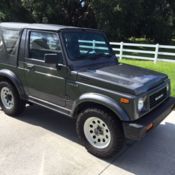