Many years ago, my father bought a 1968 model new. As a travelling salesman, he drove it all around the country putting over 300k miles on it! He has fond memories and tells many stories about his adventures in his old Saab.

In May 2014, while surfing EBay, he saw this Saab and thought it would be great to relive some of those memories and add a few more. We bought it thinking this would be a good father / son project. Fundamentally, the car seemed solid and worth the effort.

It has been quite a journey. And, yes, we have a few more Saab stories. (Or is that sob stories?)

As for the car, the story we got was it was purchased new for a daughter going to school in New York. As the last year of the Saab 96 in the US, only a red one was available. But she wanted the green one. (That explains the green over red paint.)

After graduating, she got a job in the city and parked the car in a garage. Hardly needing it, the battery died and it sat more. It sat like that for many years. Finally she decided to get rid of it and an uncle in California bought it from her. He had it shipped to him and, as the story goes, he was able to start it and drive it from the truck into his garage. But, by this time, the brakes weren't working well and he never got around to pulling it back together. It sat for many more years. Finally he decided to sell it and my 77 year old father saw it on Ebay. It still had New York tags on it.

After many hours and much money, we have a fully functional Saab 96. At 80 years old now, my dad did drive it around Georgia during the winter and spring. But as the summer got going, he didn't remember his old '68 being as unconfortable in the heat in Houston as this one is. (You see, neither car has air conditioning.)

So much for the new memories being as fond as the old ones. :)

We don't know if the odometer is showing actual miles or not. The condition of the peddles and the car seems to indicate it's actual, but who knows?

Note, with modern gasoline when the car sits for a few days the fuel evaporates out of the carburetor. It takes a while for the starter to coax the manual fuel pump to fill the carburetor. (This car still has the original ignition and manual fuel pump. Many of them have had the ignition replaced with electronic aftermarket units. And the manual fuel pump replaced with an electric one. There are many great reasons for doing these changes for a daily driver. But, wanting to keep it as original as possible, we didn't do them.)

There's no way we'll break even on this deal. But, we hope doing what we did, will encourage the next owner to also want to keep it alive. These were really great cars and ahead of their time in safety. So sad Saab took a different direction and died as a result.

It should go without saying, but I have to say it. There is NO WARRANTY expressed or implied.

For those who saw the original auction, check out the new photos where I did a better job of cleaning the car. I also took more pictures of areas that are common rust places. Notice the only place where there seems to be more than surface stuff is under the driver's foot well.

Oh, there are two videos. One of an engine start and walk around. And one of it being driven, demonstrating the clutch, freewheeling and brakes.

Click on any picture for a VERY large image. 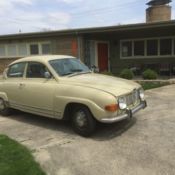 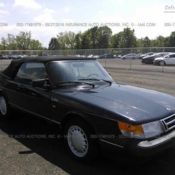 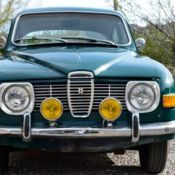 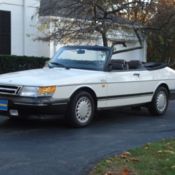 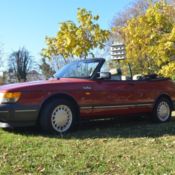 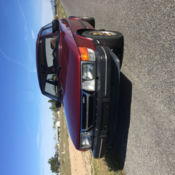 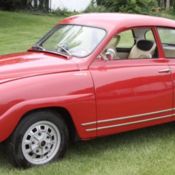 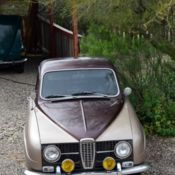 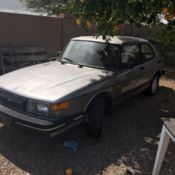