1969 PONTIAC TRANS AM The 1969 Pontiac Firebird Trans Am marked an inauspicious beginning for a muscle car that would soon become Pontiac's performance flagship. Officially titled the Trans Am Performance and Appearance Package, the $725 option was launched in March 1969 with little fanfare and no advertising. It was ordered on just 697 Firebird coupes and eight convertibles. Its name came from the popular Trans American racing series, though the car never actually competed in Trans Am racing. When Pontiac decided to offer the Trans Am package for the successful Firebird in 1969, these rowdy ponycars with the WS4 (Trans Am Convenience and Sports Package) option were born out of the Van Nuys, California, and Norwood, Ohio, assembly plants. The Trans Am would become one of the most popular and enduring muscle cars in history. Several factors contributed to that low initial production run. It was a midyear release, and the price tag for the WS4 option was high, about $1,100 to $1,200. Plus, word had leaked to the buying public that a redesigned F-Body would be available for 1970, so it's likely that buyers held off for the new model. Its base engine was the Firebird 400 HO's 335-bhp 400-cid V-8, but with standard Ram Air induction. It came to be called the Ram Air III. The only alternative was the Ram Air IV version. Ordered on a mere 55 Trans Am coupes, Ram Air IV had a longer-duration cam and 345 bhp. The base mill came with a three-speed and 3.55:1 gears, the Ram Air VI with a four-speed and 3.90:1 cogs, and both were available with automatic. A heavy-duty suspension with one-inch front stabilizer bar, Polyglas F70xl4s on seven-inch rims, and special high-effort variable ratio power steering were standard. All Trans Ams were Polar White with blue racing stripes, tail panel, and decals. The hood, a Trans Am exclusive, had functional air inlets that could be closed by the driver. Rear-facing fiberglass fender scoops covered fist-sized holes designed to vent the engine bay. A 60-inch air foil spanned the rear deck. The interior was basic Firebird, though an optional rally cluster added a 160-mph speedometer and 8000-rpm tach. Buyers also could order an $85 hood-mounted rev counter. Acceleration was similar to Firebird's with comparable powertrains, but the Trans Am did handle. We were safely passing chains of cars, eight, nine, ten at a whack... and not having to brake for the corner, but carving the turns at high speed, said Sports Car Graphic after a mountain-road sortie. It took Trans Am just three years to dethrone the GTO as Pontiac's most-popular performance offering. Its beginnings may have been humble, but the car would never be. With a great balance of horse power, driving manners, and creature comforts they help to usher in the era of Modern Muscle Cars so prevalent today. Today the first-gen Trans Am's popularity, combined with the low number of them produced, has made them collectibles of the highest degree. FEATURES Detailed L74 Ram Air III NOM 400ci V-8 code XH with 4V showing only 95,XXX miles Original 400 Turbo Hydromatic Transmission with full center console, Rare 1 of only 114 built with this tranny 3:55 Posi Rear End Effortless Power Steering, with wood grain steering wheel and chrome drivers mirror Performance Tuned Dual Exhaust with crossflow muffler Functional Ram Air Trans AM only Hood Finished in Freshly Buffed and Waxed Mirror Gloss Polar White Code 50-50 and Tyrol Blue Trans Am stripes Correct factory Lombardi Standard Oyster white Interior Trim Package Full factory Gauge Dash, 8000 RPM tachometer, Distinctive Quad Headlight Front End Rally II wheels with F70/14 raised white letters Goodyear Polyglass Radials Working original AMFM radio in the dash Factory Fiberglass Rear Deck Spoiler and Body Side Aero Flares Clean and Solid Trunk with Spare, trunk mat, Jack and Weatherstripping PHS papers to prove it is 1 of 697 Trans Am's built that year Here is one 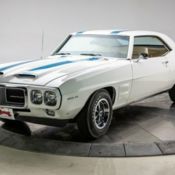 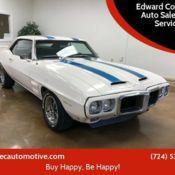 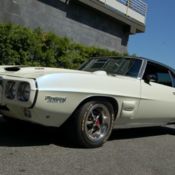 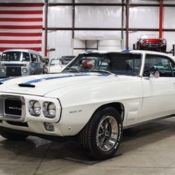 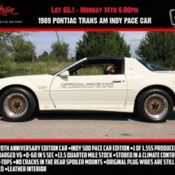 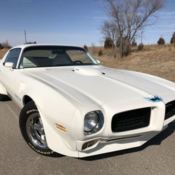 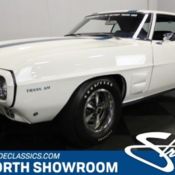 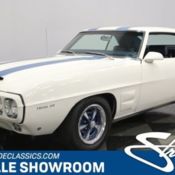 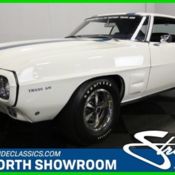 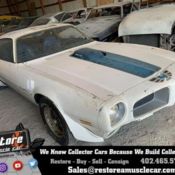