I’m the second owner of this 1988 Fiero GT. I bought the car with 65,000 miles on it about 15 years ago and have maintained and improved it over the years. Minor additions include stainless steel brake lines & grippier sintered pads, illstein shocks, &N air filter and external scoop, eplaced motor mounts with more rigid variety, eavy duty clutch, ir conditioner compressor, eplaced plastic bushings in rack and pinion steering rack with bronze bushings and probably some things I can’t think of. I now have 105,000 miles on the car. It’s had Castrol 20/50 replaced every 3,000 miles and burns almost no oil between changes. For those who don’t already know, ontiac redesigned the suspension and braking systems for the 1988 model year to make the Fiero GT better for their race program, t’s the one to own if you intend to collect for future value. Hagerty shows the value change over time, heck this.

My 88 Fiero would be rated as a #3 by their system. The only things needing repair are the back panel of the driver’s seat and the cruise control. Tires are good and relatively new. It was originally red and the new yellow paint is a stock Corvette color, rofessionally done for over $4,000. The original owner gave me the shop manual and some original paperwork with the car. No low ball offers please, don’t really want to sell it because it’s so fun to drive but I need something that I can carry my dogs in. Here’s some interesting reading, hanks for looking.

FieroGTBackground
In case you're not familiar with "the Fiero Story", ieros are historically significant vehicles. It was the first domestically-produced mid-engined car (the only one, ntil Ford introduced the Ford GT in 2005) and the last Pontiac produced in Pontiac, ichigan. General Motor's intent behind the Fiero project was to give Pontiac its own high-tech sportscar (like Chevrolet has the Corvette). In order to keep the project cost-effective,there were two distinct models: the basic Fiero ( with a Miata-like personality and price) and the Fiero GT.
The GT grew out of the base model's structure and would eventually have its own unique suspension, ngineand bodywork. As such, he Fiero (especially the GT) evolved significantly between its introduction in 1984 and the final model in 1988. For the GT, he 4-cylinder engine was replaced with a V-6, he 4-speed transmissionreplaced by the slick-shifting, durable Getrag/Muncie 5-speed, nd the "GM parts-bin" suspension, replaced by a 1.5 million dollar set-up that was developed on a race track. This suspension was engineered to be compatible with the very high output motors (probably a version of the Northstar) that would have gone into the car in 1990.Pontiac's goal was to make the Fiero as similar as possible to the Ferrari 308. Comparedto the Ferrari, he Fiero GT has shorter overhangs, longer wheelbase, nd is wider, ith plenty of tire for the weight of the car. Car & Driver called the Fiero "One of the best cars in America" and rated it in their top ten . It was the first American car to win in IMSA GTU, nd won well over 40 races in the 36 months it raced, eatingthe Corvette and Ford Mustang in 1985. (On a skidpad the Fiero GT hit .84-.86g on the skidpad to the FerrariTestarossa's .84g) In an unfortunate cost-cutting move, hen-CEO Roger Smith closed the Fiero plant in 1988.
Unlike other Pontiac models which shared assembly lines with one another, he Fiero had its own separate operation. 1988 was the last production year for the Fiero, nd only a few thousand V-6 models like this one were produced. Only about half of them were five-speed. 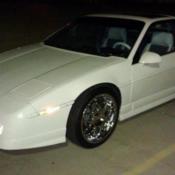 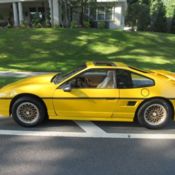 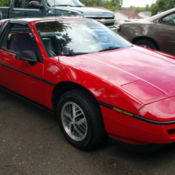 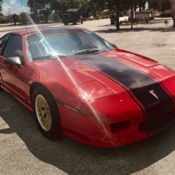 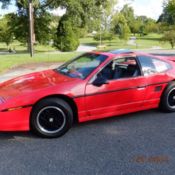 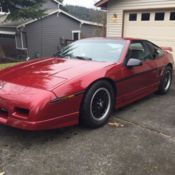 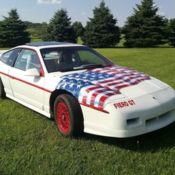 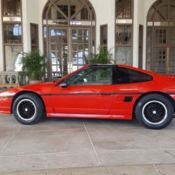 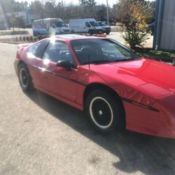 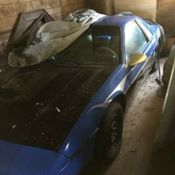