The most ACCURATE K.I.T.T. Replica Ever Built!

Twenty years ago, I made my 15 year old self a promise that I would build a Knight Rider replica. At the time, I didn't have the knowledge, time or money to execute that plan. So, it was put on the back burner. Over the course of next two decades, I immersed myself in the show – more specifically, in the behind-the-scenes aspects of the show specifically relating to the cars. I studied the details – both on screen and through behind the scenes build pictures – like no one had studied them before.

My goal was to build a nearly exact re-creation of the season two “hero car” as seen in the series. The “hero car” was the car that the show used anytime the viewers would see David Hasselhoff getting in to and out of the car – it was always kept in pristine condition and was outfitted with K.I.T.T.'s amazing dashboard. The car that I would build would be accurate down to the smallest detail.

You will see that I use the phrase “series accurate” quite a bit in the specs below. Many people say that you can't really build an accurate car, because they changed so much, sometimes from scene to scene within the same episode. But, I disagree, because I did not build a car that's accurate to the overall depiction of K.I.T.T. in the series, but a car that's accurate to ONE of the 20 cars the studio ACTUALLY built to depict K.I.T.T. on the series. That's why you will see this car has things like a manual trunk pull cable and a brake line lock – they are features that we, as viewers, are not supposed to know about, but were put on these cars by the studio. I hope that makes sense.

I am confident in saying that this car is the MOST accurate replica EVER built. It is, in effect, a "NOS" screen used car that was never actually used on screen. The ONLY deviations to that accuracy are things that are required to be on the car in the real world – like front turn signals and seat belts. Also, the electronics on the car seen in the show really didn't work – these electronics do.

I told myself that I would build it. I fulfilled my promise to myself, and now it's time to move on to another project. That's why I am selling my creation.

If you've stuck with me to this point, thank you! Now, let's get into the specs on the build.

Using a straight, rust free car for a donor was of upmost importance. This car was purchased from the Midwest and shipped to Pennsylvania. It has never been in an accident and the only body repairs were minor dings removed using PDR (paintless dent removal). The body itself has about 80,000 miles on it. The car was stripped to its shell and sent to a reputable body shop, where it received an $8000 PPG Deltron base coat/clear coat paint job. During that process, the mounting holes for the front ground effects and the antenna were filled and sanded smooth (since K.I.T.T. didn't have those features). The hatch, windshield, door trim, etc was all removed to ensure it was painted properly. I'd give the paint a 9.5 out of 10. It looks EXTREMELY nice, but because black paint shows everything, if you put your face up close to the paint, you can make out some hairline scratches here and there.

The standard defrost rear hatch was swapped out for a hard to find non-defrost version, as none of the cars used in the series had defrost. The glass has some minor scratches here and there due to its age, but they should come out with some glass buffing. The expensive (and correct) rivet-on aluminum and rubber belt line trim on the outside of the car was sourced and installed. This car also wears a set of NOS (never installed before this car) 15x7 turbo fin rims with the factory original NOS “bowling ball” hubcaps (not reproductions) mounted on brand new tires.

The Knight Rider specific parts on the outside of the car include a rear tail light blackout with custom made mounts to match the screen used vehicles. The front fiberglass bumper was cast from a mold of our privately owned, screen used season 2 bumper, which is not available to the general public, making this one very unique. Because the season two bumper covers up the factory turn signals, they were moved down into the fog light openings. This one detail, while not screen accurate, is needed due to U.S. federal law.

NOS fog lights, the same make and model used on the original cars, were hunted down and installed in the correct way. Our scanner bar, also copied from an original, was installed and houses a 55W halogen unit with multiple patterns, remote and option for sound. A front mounted camera tow bar was bolted to the unibody to complete K.I.T.T.'s exterior look.

The interior of the car was gutted completely. TWO complete cars were purchased as donors for parts to ensure that this car had all of the correct pieces. One of those donors was a 1982 T/A, which sacrificed its 82-only shifter, shifter housing, shifter plate, center console, transmission linkages and tan interior. The factory steering column was rebuilt and a new ignition lock and turn signal stalk were installed.

The dashboard shell is constructed of durable fiberglass, and was customized just for this car to be as accurate as possible. The electronics were wired in such a way that, by unplugging a few cables and removing four screws, the dash can be removed for servicing, if needed. Wires behind the dash are labeled with their function.

The electronics are wired to sensors in the car itself, and accurately display the car's vital functions – speed, mileage, tachometer, battery, oil pressure, engine temp and fuel level. Some of the other displays are dummy ones that randomly cycle up and down.

The entire dash is turned on and off by pressing the POWER button on the dash. When activated, the dash goes through its startup sequence. You can cycle through the Auto/Normal/Pursuit buttons by pressing those buttons underneath the monitors. All make the appropriate tone sound when pressed.

A secondary fuse box was added to this car, to correctly and safely add all of K.I.T.T.'s additional electrical devices. This fuse block is labeled for easy maintenance, with many extra slots for future accessories.

VIDEO OF THE INTERIOR ELECTRONICS CAN BE FOUND HERE: https://www.youtube.com/watch?v=W9xor-nC4vE

The dual color LCD monitors are surrounded by a one-off custom 3D-printed frame, designed from scratch to be more accurate. The monitors have remote controls and are connected to two HD media boxes with removable SD cards, mounted in the center console. This allows you to easily load new media for playback on the screens. The monitors are powered separately from the dash itself, by two switches located below the media boxes.

There are 20 switchpod buttons, 10 on each side of the steering wheel. These buttons are highly accurate to the series. At dash power on, the yellow and green LEDs light up. When a button is pressed, the red LED momentarily lights up. These buttons are tied to two 19 channel MP3 sound boards mounted underneath the dash. These boards each have removable SD cards that allow you to customize the audio played when a given button is pressed. The current button setup has the appropriate sound effects play. Also included are extra buttons that can be swapped for the ones in the car, allowing you even more customization! The MP3 sound boards have an additional 18 channels still open to add additional sound effects in the future.

The wheel is made from a high grade urethane with an internal welded metal skeleton, making it very safe and sturdy. This wheel features the series accurate smooth hand grips and a laser cut Knight shield logo on the front.

A season two specific lower console was installed in this car. The fiberglass piece supposedly came from an original Universal Studios mold. The car's NOS power window switches are integrated into this console. The buttons are independently wired to light up when pressed and make a random tone sound where appropriate.

Like the lower console, the upper console fiberglass was cast from an original studio mold. The buttons were independently wired to make a random tone sound where appropriate. Series accurate overhead console caps are mounted to the car's t-roof, giving it a nice, clean finish.

Original 1982 door panels were sourced (to include the 1982-only chrome “L” trim), and the upper part was recovered with the series accurate Parella cloth. The super rare door panel bird emblems are still in place, which can be seen on screen in the hero car. Brand new upper door trim, weatherstripping and inner door handles have been installed. The seats were professionally re-stuffed and re-covered using the same Parella cloth and cloth blackout inserts were added to mimic the screen car. Brand new carpet and a headliner were installed as well. A nice set of original tan interior panels have been installed. The panels exhibit no signs of fading. Seat belt buckles were disassembled and restored with new buttons.

The trunk pull cable, seen in the show, has been installed. The EXACT cable used in the series cars was sourced here – a 30 year old item that hasn't been produced in decades. A brand new Pioneer head unit, with remote, USB and CD capability, was installed, along with a hidden antenna. Finally, new power window motors were installed in both doors.

This car has a BRAND NEW (NOT rebuilt – but a brand new casting) GM 350 crate motor that puts out about 300HP. This motor has about 100 miles on it. The motor has been painted GM blue to mimic the original 1982 engine color found in these cars. A freshly rebuilt Rochester Quadrajet sits atop the engine, covered in a NOS air cleaner identical to those used on the show cars. Also includes a brand new high flow water pump, alternator, distributor, spark plugs and wires. The engine bay is dirty in spots, as it wasn't completely gutted, cleaned and painted during the build. An afternoon of detailing would really make it pop. The car fires right up and idles nice and smooth.

A freshly rebuilt Turbo 350, 3 speed automatic transmission with upgraded internals was installed. This transmission has about 100 miles on it. We even painted the transmission pan green, because that's how the original cars were painted! The Turbo 350's are considered a very tough and durable transmission. Shifts very nice. Both the engine and transmission DO NOT LEAK!

Great pains were taken to secure an original 1982-84 dual resonator exhaust system. The exhaust was painted with a high temp silver paint to make it look like new and installed.

Other improvements include new rear brake calipers and new tie rods. This car came from the factory with 4 wheel disc brakes and the Sport Suspension package. Eibach front and rear lower springs to match the stance of the original hero car were installed. Brand new hood and hatch gas supports were installed. Finally, a brake line lock was added to easily allow burnouts, 180s and 360s. It is activated via a switch inside.

This replica is the best of the best - and I won't be building another!

*A note about the VIN- the original GM VIN listed here is no longer the legal VIN of the car. In 1985, when this car was a year old, it was stolen and recovered. The State of Missouri assigned it a new VIN, which is now riveted to the car. However, eBay would only allow entry of the original VIN. 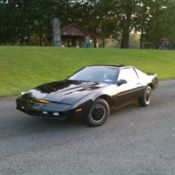 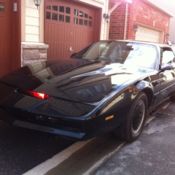 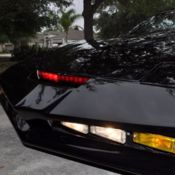 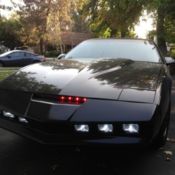 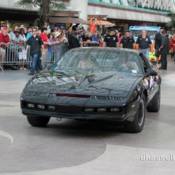 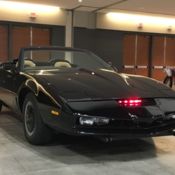 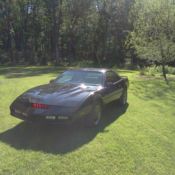 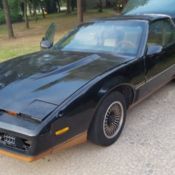 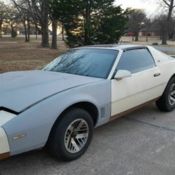 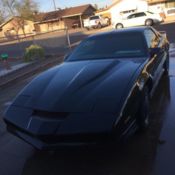