Too many people go looking for the same stuff they see at shows, overlooking great cars that are less familiar. Take this 1970 Oldsmobile Cutlass, for example. Same underpinnings as a Chevelle, but with a different look, more luxury, a comfortable ride, and an upgraded drivetrain, it makes a lot more sense for a lot less money. This car's white-over-blue combination is flat-out awesome. You don't see white cars that look this good very often, and that's... entirely due to the subtle combination. The paint is a few years old, but white never goes out of style and looks great almost indefinitely. Up close you can see a few signs of age, but even from five feet away, this car totally nails it. It hasn't been dressed up like a 442 clone, which we like, and the clean, rounded lines of the Cutlass really give this car a great look. The blue pinstripe that highlights the curve of the front fender is a nice touch, and yes, it used to have a vinyl top that was removed during the repaint and the flashy chrome trim highlighting the lines remains. Nice chrome bumpers, that cool stainless trim along the rockers, and the subtle "OLDSMOBILE" print in the trunk edge all add up to a car that stands out without making a lot of noise about it. The blue bucket seat interior is just drop-dead gorgeous thanks to correct reproduction seat covers, beautiful door panels with inlaid woodgrain panels, and that familiar Oldsmobile dash. The car has been driven (which is a good thing) so there are a few minor signs of wear, but the materials are high quality and they wear like iron so it'll look this good for years to come. The original steering wheel has been replaced with a very comfortable wood rimmed aftermarket piece that feels great. The handsome gauges cover the basics and look great in the burled walnut fascia, and yes, this is a factory A/C car with a lot of new hardware working behind the scenes. There's also an upgraded AM/FM/CD stereo with custom speakers in the kick panels, and thanks to Olds's more luxurious status, it's nice and quiet inside. The console houses the shifter for the updated 2004R 4-speed automatic transmission, which makes this car a fantastic high-speed cruiser. There's also a massive trunk that's in good order with a full-sized spare just in case. The Oldsmobile 350 cubic inch V8 has its own unique personality and shares almost no parts with its corporate cousins of the same size. Instead, it focuses on torque, making this Cutlass feel quick around town. The engine was rebuilt in 2013 and it's tidy under the hood if not detailed to perfection. There's a new chrome air cleaner up top and we like the blue valve covers and other details, which tie it together with the blue interior quite nicely. Note the upgraded A/C compressor and other components, as well as a recent alternator, so it's ready to go. In fact, it's been driven extensively and made the drive to our showroom without incident, so you shouldn't be afraid to hit the road in this Olds. In addition, the suspension was rebuilt, so it rides and handles great and there's a dual exhaust system with a nice sound that's instantly recognizable to Oldsmobile fans. 3.23 gears in the 10-bolt rear end work quite well with the overdrive transmission and blue Rally II wheels look fantastic with those big 225/70/15 white-letter radials. Just a nice, clean Olds with a great look, nice options, and no stories. Look at the price and then try to find more car for the money. We're betting you won't. Call today! 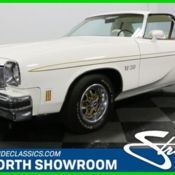 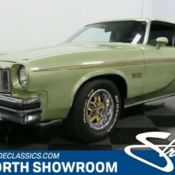 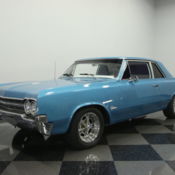 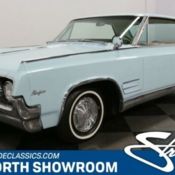 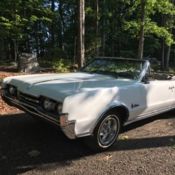 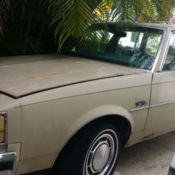 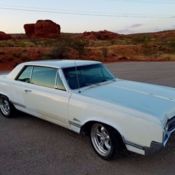 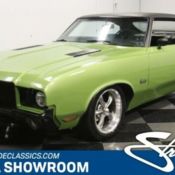 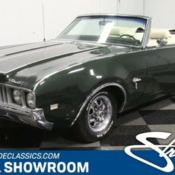 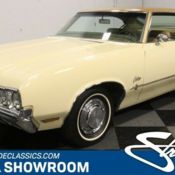