While the Tri-Five Chevys have been taking a beating in the market lately, the values of their corporate cousins at Oldsmobile and Pontiac have been steadily inching upwards. This 1956 Oldsmobile Super 88 Holiday coupe with just 27,836 original miles is perhaps one of the nicest low-mileage cars available anywhere, and it is backed by a complete and documented ownership history

Arguably the most handsome car to come out of the GM design studios since the war, this Oldsmobile Super 88 is a brilliant study in 1950s style and engineering. The paint and bodywork on this Holiday coupe is a combination of original and restoration work, but there was a strong inclination to use NOS parts wherever possible. Replacement parts include the right front fender, both bumpers, the hood ornament, and both taillights, most of which were installed during the original owner’s tenure. At some point later in its history, the trim was removed and restored, while the body was refinished in its original turquoise and ivory paint scheme. The blending between the original areas and the restored areas is seamless, and the end result was good enough to have won the Ransom E. Olds award at a National Oldsmobile Club meet as well as being selected to the 100th Anniversary parade in Lansing, Michigan.

The interior is 100% original in every way, and shows you what a well-preserved machine this really is. Seats, door panels, carpets, and even the headliner are factory-installed pieces that remain in show-ready condition. There’s some wear, but it's hard to believe this car is 55 years old. The dash is a spectacular showcase for Oldsmobile's jet-age styling, with a pair matching of oval-shaped panels in front of the driver and passenger, joined by a stainless grille that houses the radio. The bench seat is still firm and comfortable, and there can’t have been more than a handful of passengers in the back during this car’s long life—it’s just too nice. Everything works as it should, including the radio and heater, and the steering wheel shows no signs of aging or stress cracks, just a warm patina. In the trunk you'll find the original fabric and what very well might be the original spare that has never been down.

Several years ago, the 324 cubic inch Oldsmobile Rocket V8 was pulled for detailing and at that time the gaskets were renewed, but the mechanicals were untouched-with just 27,000 original miles, it would be a crime to rebuild it. The block got a fresh coat of Oldsmobile green, while the air cleaner, accessories, and carburetor were all restored. The inner fenders and firewall were painted, and then the engine was reinstalled with fresh decals in the appropriate places.

The engine is backed by a 3-speed Jet-A-Way automatic transmission, which, like the engine, has been removed and detailed, but never rebuilt. The chassis is rust-free, thanks to dealer-applied undercoating that has been touched up here and there, but never completely removed. The suspension is completely original and rides in a way that no restored car could ever equal. Power drum brakes stop the car with confidence, and it wears relatively recent 7.60x15 Universal whitewall tires that are period correct

Documentation is extensive, including a paper trail back to the original owner, Myrtle Forward, who seems to have owned the car until 1977. There are also volumes of 1956 Oldsmobile promotional materials, including a banner designed to hang in the front window of the dealership.

Combining the low mileage with careful and sympathetic restoration work, this is like driving a new 1956 Oldsmobile off the showroom floor. With extensive documentation that verifies the low mileage claims, this car is an excellent candidate for preservation class judging. Oldsmobiles are powerful, reliable, fun cars that offer just as much style and performance as the smaller Chevys, often for a lot less cash. Call today! 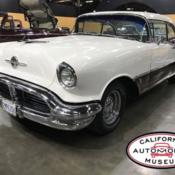 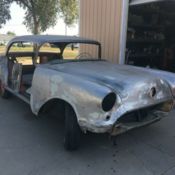 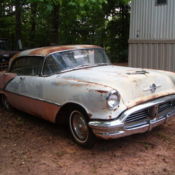 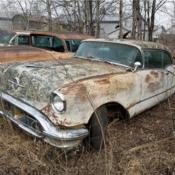 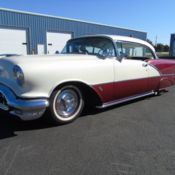 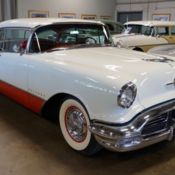 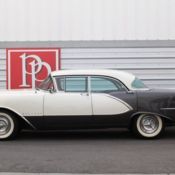 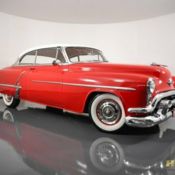 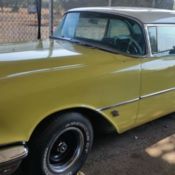 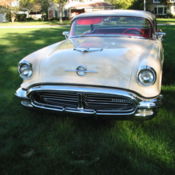