I will tell you all I know about the history of the car. I bought it from a fellow who lived in Connecticut sight unseen back in 2002. He had the car restored and paid for a frame off restoration. The actual details of the restoration I have no black and white facts, but just his word. The Engine is not numbers matching, but it is a Oldsmobile engine that I traced back through the stamped vin number on the block. The motor is a 1975 Olds 350. The motor was rebuilt and striped down to the basics. Very clean looking inside the engine compartment. No AC and no smog units. There is one little charcoal canister on the right side tucked away. Intake manifold is an Edelbrock that is matched up with a 1602 Edelbrock 4 Brl 600cfm carburetor. The old style points and condenser was replaced by a Pertronix Ignitor 1, so the dwell is taken care of and no adjustment required. The Engine starts fast and runs and idles like a new engine. Why? Because since 2002 I have only driven the car a total of 500 miles, tops. The guy who owned prior to me, pretty much kept it parked in his garage and only visited a few car shows with it. I also have done the same. Garage kept and drove it to a few shows and I actually won a 2nd place in class. I also drove the Cutlass in several parades in the area where I live.The Transmission is the numbers matching Turbo 400 3-speed automatic transmission. Because things start to leak when they sit and are not driven, I took the Cutlass to an old car mechanic and had the seals replaced and serviced and we are back to being leak proof for awhile. If you choose to drive it all the time, it'll never leak. All Old cars do it, if you do not drive them they will eventually leak. The Rear-end is a 3.91.1 limited slip numbers matching rear-end.
The trunk of the car is also in perfect shape and very clean.
The drop top works beautifully and was installed new during the rebuild. There are a few blemishes that might be able to be scrubbed out, but not bad enough where I want to scrub it. I also have the boot that covers the top when retracted.
When I bought the car the 2 items that he was most proud of was the Tic-Tac-Toc Clock that he spent $1500 on to get in perfect working order. It still works perfectly. The second item that he spent big money on was the console. The Hurst olds dual gate shifter is there and functioning perfectly.
The Interior of the car on a scale from 1 being the worse to 10 being the best, I would have to give her an 8 to 9. It is almost perfect.
Body flaws: The paint and body are almost perfect. The car has a few little marks on it here and there, but pretty close to perfect. The only flaw that it has it the same flaw it had when I bought it. On the lower left hand door, there is two little bubbles that have not shifted or grown since I have own the car. The previous owner told me he thought they were flaws in the body that it was an oversight during restoration. To me, they looked like rust bubbles. The only thing I have to say about them is that they have not grown since 2002 at point of purchase.
I will email all the pictures I have if you give me your email. I also have a video of the convertible top in motion. 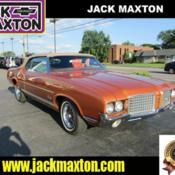 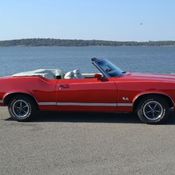 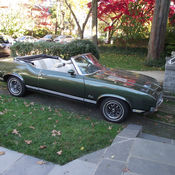 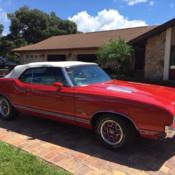 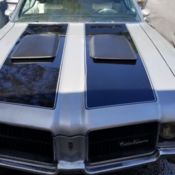 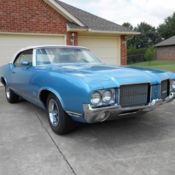 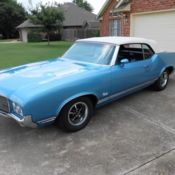 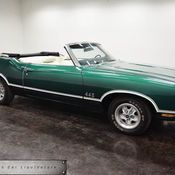 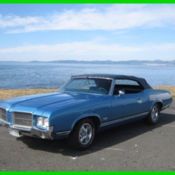 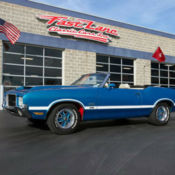