This 1969 Mercedes-Benz 280SL is a European model that was sold new to a Swiss Mercedes dealer, who used the car as his personal vehicle and eventually moved it to Houston, Texas. I`m the 4th owner.. I bought it in 2014.. I has added about 4k miles.
Power comes from the matching-numbers 2.8-liter inline six, which is paired to a 4-speed manual gearbox. This W113 is now offered with a factory Pagoda hardtop, 21 years of service records, original steel wheels, Build Card, and a clean title.
A new soft top in the original color was installed 20 years ago. The Pagoda hardtop is clean, and new soft top/cover seals were recently installed.
Seven years ago, this 280SL was fitted with refurbished Mercedes Bundt alloys and new tires. The original Firestone Phoenix spare still resides in the trunk, along with the jack and tools. The original steel wheels, unpainted wheel covers, and old tires are included with the sale.
The interior was also redone 20 years ago with new factory-correct Cognac MB Tex seat upholstery, refinished wood trim, retractable shoulder belts from an R107, new aluminum heater/vent controls, and a correct factory steering wheel. Additionally, the shifter was extended, fitted with an OEM knob, and given new bushings. A CD player with USB and AUX inputs is also present, along with two speakers in the kick panels and two under the soft top boot.
Being an European car, the metric speedometer/odometer was replaced shortly after the second seller's purchase. It shows the equivalent of 104k miles and is included with the sale. A US-spec unit was fitted and currently shows 77,500 miles.
The 2.8-liter inline-six is mated to a 4-speed manual gearbox and has received annual oil changes since 1996. An electronic ignition system and new spark plugs/wires have been installed, and the mechanical fuel-injection system was checked and everything is okay.
This W113 retains the original engine according to the included factory Data Card. The most recent oil service was completed on April 14, 2018, and the brake fluid was flushed at the same time. 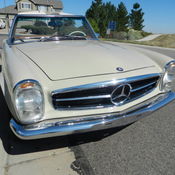 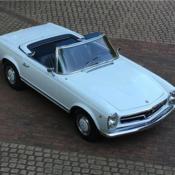 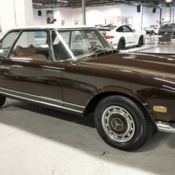 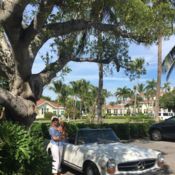 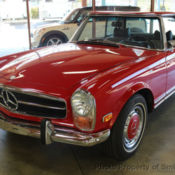 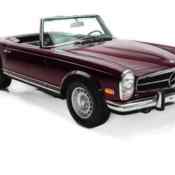 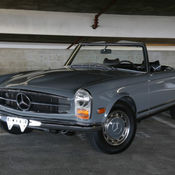 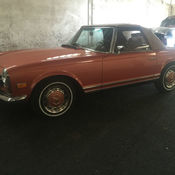 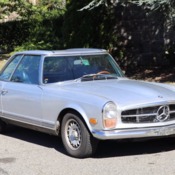 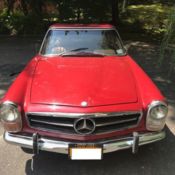