In December of 1967 Mercedes unveiled an improved W113 - the 280SL. With its M130 fuel injected engine increased to 2.8 litres the 280SL enjoyed a romping 170hp and 180 ft lbs of torque. This SOHC inline six engine is considered very reliable and ‘bullet-proof’. The car was designed with aluminum hood, runk, nd door panels. The 280SL boasted power assisted four wheel disc brakes and two tops were included – a hard top and a fold away soft top. The comparatively short and wide chassis, ombined with an excellent suspension, owerful brakes andradial tiresgave the W113 superb handling for its time. The styling of the front, ith its characteristic uprightBosch"fishbowl" headlights and simple chrome grille, ominated by the large three-pointed star in the nose panel, aid homage to the then already legendary 300 SL roadster.

Why Buy This 1969 Mercedes Benz 280SL - This stunning and rare European model 1969 Mercedes-Benz 280SL is finished in Light Beige #181 with a Cognac MB tex interior and sports a factory 4-speed manual gearbox. All gauges are metric and the current mileage is 88,000km – which is 54,000 miles.

The car was imported to Florida by a US Army Officer in 1975. It changed hands once in 1982 and it was finally sold in 1988 to the current owner. That makes it a three owner car. All of the cars service history from 1988 to present day is documented with receipts. This European model car has been titled in FL, Y, T and CO with no issues.

The 280SL European model can be identified by the one piece Bosch Lichteinheit headlight lenses and lack of chrome bumper guards, ide turn indicators and seat headrests – all requirements made by the US government for Mercedes Benz to sell the car in North America. Additionally, S market 280 SL engines required emission control modifications, ncluding "softer" valve timings, reduced compression ratio and a modified injection pump, hich reduced power from 168hp to 158hp. So this car boasts an additional 10 hp over its US model sisters.

The car was stripped down in 1999 and completely repainted in its original #181 color by Bud's Benz, ith a new convertible top in tan. All rubber seals were replaced with new. The paint finish on the car is still beautiful and shows a deep luster and shine. The interior is in excellent condition showing light patina and wear. The convertible top shows some wear. The hardtop has never been used. The wood and trim on the car are in excellent condition showing very minimal age. The engine starts right up and idles smoothly. There is no smoke on start up, or under acceleration. The engine pulls strongly and has excellent power. The car has passed Colorado emissions every year since being titled in 2001. The transmission is ‘like new’ and free from any gears grinding or from the clutch slipping. The suspension feels tight and precise and free from any noises. The steering and brakes are excellent with no play or fading. All of the electrical items in the car are operating as designed, ncluding the heating/cooling lights and center cluster lights. The interior, runk and glove box lights are operating as well. The main Bosch headlights were rebuilt in 2015 with new mirrored reflectors, eals and bulbs.

Both headlight body notches are present in the front as well as the original spot welds inside the fenders in the engine compartment. The original engine heat shield is still intact on the car. The original 4 digit numbers (5309) are all matching on the hood, ardtop, nd convertible top hard boot lid. There is no rust found in or under the car.

This is an excellent opportunity to acquire a beautiful, ow mileage, speed European 280SL perfectly maintained by the same owner for almost 30 years.

Please feel free to call or email with any further questions on this beautiful 1969 Mercedes-Benz 280SL. 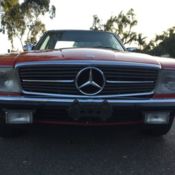 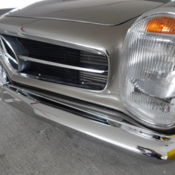 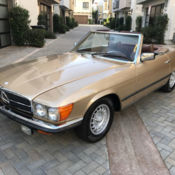 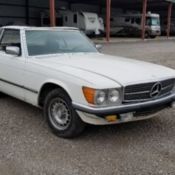 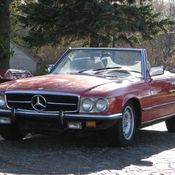 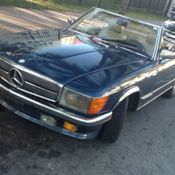 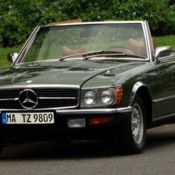 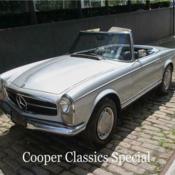 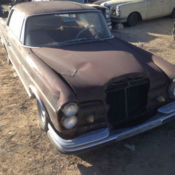