This classic beauty has been a work in progress ever since I purchased it over 17 years ago from its first owner with its original Desert Sand non-metallic paint. It is a six-cylinder 2.8 Liter that runs well, with a smooth-shifting transmission. It can be used, both as a daily driver or as an occasional showpiece, which is how I have been using it, as I work on it to restore it to its past glory. What is exciting is when other knowledgeable drivers honk and give me a thumbs-up as they see me driving this down the road or when at a stop signal; it is an eye-catcher! The car looks and presents well. It has some scratches, minor paint bubbles, and a small ding (~10mm dimple) in the driver door, but it is really a great work of art. This car has many new parts in place and is an excellent purchase for the right collector, who wants to restore this car to its original glory, even at a show someplace.

The "stroke 8" also offered exceedingly good handling and remarkable comfort, not surprisingly, as the front sub frames and wishbones, along with the rear suspension system, were good enough to import into the R107 SL-Class Roadster of 1971 (starting with 350SL graduating to 450SL, and then to 380SL). A coupe variant of this model was introduced in 1969 with a 'C' designated after the model number. Where the saloon would just have '280E' written on the trunk lid, the coupe would have '280CE.' Although the coupe was the same length as the saloon (from the A-pillar forward it was identical) the passenger compartment was 19 inches shorter, the roof was two inches lower, and the trunk was considerably longer—it really has a huge trunk. It also had a more elegant rear window, reminiscent of the "pagoda SLs," chrome strips down each side of the roof and a pillar less design, where all the windows could be wound completely away for "summer motoring."

This series hailed from an era before Mercedes-Benz became obsessed with outdoing BMW, Audi, and others on performance and power, although the 280 would have outdone most other cars of the time. This car had a distinctive appeal owing to its beautiful, classic (modern for that time) design and the superb level of integrity and refinement offered. It was given a major facelift in 1973, which included some exterior refinements such as a lower hood-line, which meant a more imposing grill and lower placed headlamps, with no more old-fashioned quarter front windows and also two big rear view mirrors. In the interior, inertia reel belts were introduced. A new-generation padded steering wheel also was added with a modern 4-hole design with other minor changes.

Like its saloon variant, this car also boasted advanced technological innovation. The model year 1969 saw the introduction of the Bosch D-Jetronic, fully-electronic fuel injection system into the 250CE. This was the first ever production Mercedes-Benz to use this system, although it was abandoned two years later in favor of a mechanical injection system. The "stroke-8" name comes from the designation for the 1968 model year cars - they were informally called "W114/8" and "W115/8" the first year. This name stuck in common usage even after the "W114/9" was introduced in 1969. Today, "stroke-8" refers to the entire generation of cars. Innovations in the stroke-8 models include a center console (a first in a Mercedes sedan), and a revised rear axle. All coupe models used the 6-cylinder engine (and thus were W114s) and were designated with a "C" in the model number suffix.

Overall condition of the car:

The trunk floor has water damage due to a poorly-installed weather seal when I got the car in 2001 and needed replacement. A new seal is installed now and I have two brand new floor panels (two piece set) that are still in the original boxes (paid $925 to a MBZ dealer just for these two pieces) ready to install. I also have many other spare parts I have collected over the years that will go with the car. I estimate the total cost of these spare parts to be about $2,000 (including the trunk floor pieces)

What is exciting about this car is that many of the original documentation and some service records are available to go with the car. Even the original Window Sticker that shows all the options and prices is intact (see photos). The original MBZ Data plates and manuals and other paperwork is in its original pouch. I also will give the Engine manual (a 300 page bound comprehensive service manual).

As the one-minute video shows (will be emailed upon request) the car starts right up and runs smoothly. Because it is a carbureted car a cold start after many days of storage may require aggressive cranking, but the large DieHard battery is capable of providing the needed juice!

The A/C worked, but needs charging. The heater works, radiating heat, but the heater fan does not go on; it needs work/replacement brushes. I have installed new 185-75/14 radial tires-- the recommended size. Its radiator was re-cored recently and the entire cooling system has been overhauled, including the water pump and other elements. All belts are also new. The front dashboard has minor crack near the speaker baffle, but is otherwise in good shape. The car also has a carburetor from another 280C, which makes it run much better; the original carburetor is part of the spares that comes with the car.

This is a great buy for any Mercedes project aficionado, who likes to restore the 1970 vintage classics. While the car is roadworthy and functional it could use some loving care to restore it to its full glory.

In CA the car is smog exempt. 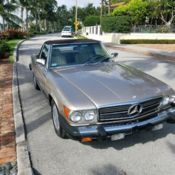 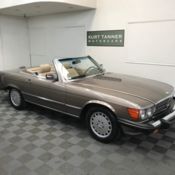 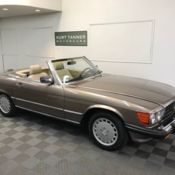 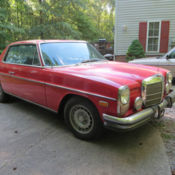 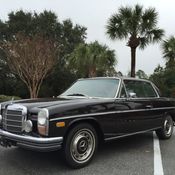 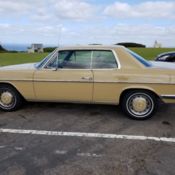 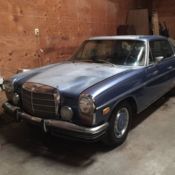 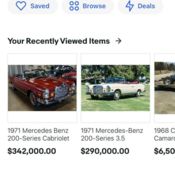 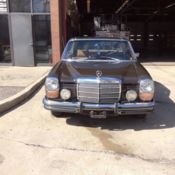 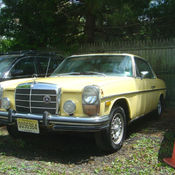