Absolutely incredible: here is the Defender/Series you've been looking for... a rust-free 109" wheel base imported from the United Kingdom that spent its life in the service of Her Majesty's Armed Forces.
I imported this 1985 Series III after owning a few European-spec Rovers, always having payed someone to handle the process of getting them to the US. I decided to try my hand at the importation, so I located this truck that had been purchased from the British Ministry of Defense by RPI Engineering - a great group of fine mechanics in England who refurbish vintage vehicles. Upon purchase, I completed the UK export process; located and contracted with a sea-going shipper; completed all US EPA, DOT and Customs paperwork; navigated the (absolutely Byzantine) Port of Galveston on the Texas Coast; and legally registered the Rover with a clean Oklahoma title. (For those wondering how hard the entire process is or how long it takes, the answers are: 1) very; and 2) a long time...)
Upon receipt of the vehicle, I:
1. Removed the window-less "lorrie"-style hardtop and replaced it with a new Exmoor custom-fit canvas top with dual side and rear windows2. Refinished the cool tongue-and-groove hard pine bed floorboards that came in the truck3. Located a pair of original Land Rover dual jump seats for the rear and fitted them with matching hard pine inserts4. Had our local vintage Rover expert go completely through the engine, conducting a full tune-up5. Replaced the original brake lines with stainless steel lines6. Removed the original tube tires, re-fitting the vehicle with a new set of 33" BF Goodrich All Terrain tires (that currently have less than 200 miles on them)
Mechanically, the vehicle is in superb shape. It starts - even from a cold start - with a single turn of the key. The engine runs smooth and strong. Steering and shifting are solid and without issues. The suspension is stock and original to the vehicle; I have not changed it at all. It sits a bit more aggressively in its stance than a civilian-issued vehicle, as I am advised this is how the British Military ordered them from Land Rover. This will prevent your having to put on a lift kit to bring it off the ground and risk messing with the steering geometry.
Cosmetically, the thing is just cool. The interior is in good shape, as the original seats suffer only a few small tears and even the dash is in good shape for its age. The grille is original and perfect. The bumpers are intact. Most importantly, there is no meaningful rust on or under the vehicle. The lone cosmetic issue of note is the peeling paint on the passenger side. I was told that the British Military take tedious care of the mechanicals, but that they merely repaint the exterior of service vehicles right over the old. This shows on this vehicle, as the peeling simply reveals another coat of the exact same color beneath. If you're handy with bodywork and so inclined, you can rectify. If you like the patina as I did, leave it as-is. It's in no danger of rusting through.
The issues I have identified with the truck are as follows:
1. I disconnected the lights while installing the soft top and simply haven't reconnected them. This will be an easy installation for anyone remotely handy.2. It does not have a spare on the hood, though it is set up to easily fit one3. The wipers do not work... though if you're driving this in the rain, you probably aren't paying attention
This Rover comes with a few additions particular to it having been a military truck, including special light configuration (including "Convoy" settings), original gun rack behind the seats, dual petrol fuel tanks and a NATO-spec hitch receiver. It also has attached to its grille a saddle medallion from the horse processional at Queen Elizabeth II's Diamond Jubilee Parade. Yep.
The most common question I hear is, "How fast will it go?" I routinely have driven this vehicle 55 on the highway, which it handles just fine. The engine would be comfortable with more, but the limiting factor is the four-speed manual transmission.
The Rover sits alongside my Defender in the barn on my farm. It has probably seen 300 total miles of driving since I purchased it, and it has not been off-road except for my gravel drive. If you seek an absolutely perfect beach vehicle, a run-about for town or an ideal specimen to create a frame-off show vehicle, this will tick all the boxes. What this is not is a Kool-Aid painted rust bucket that I've dragged across the pond and want to make $25k on. You can find those everywhere. What it is is a solid demonstration of timeless Rover mystique of which very few are to be found running, titled and ready here in the United States. The price reflects its scarcity, availability and condition.
I'm happy to help arrange shipping to wherever you are in the Lower 48. Thank you for looking!
*Note: The vehicle is a 1985 Series III. I had to enter "1980" and "Defender" to get eBay's automatic system to accept the VIN number, since it's a European spec. The Title reads 1985, as does all the paperwork. Simply an eBay issue. 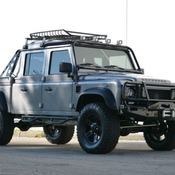 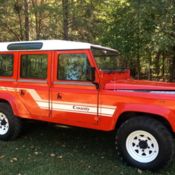 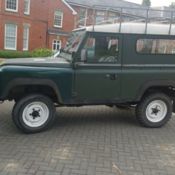 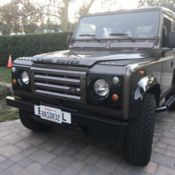 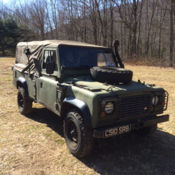 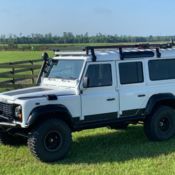 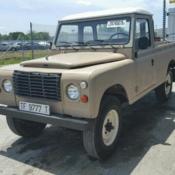 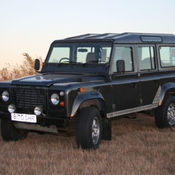 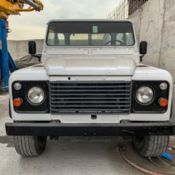 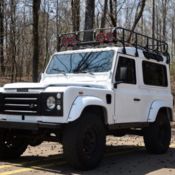