I have decided its time to sell my ORIGINAL Range Rover Classic. "Nigel" is the name given to this 1987 Range Rover Classic by its original owner, a friend and prominent local businessman. He took delivery from the dealership, Don Rasmussen Co. or Portland on 08/31/1987. I am the second owner after purchasing this classic from my friend on 12/28/2005.
Included is a very extensive collection of records starting with the original bill of sale as well as the Original Owners Manual. The exterior is a special "Cassis Red Metallic" and the interior is Pembroke Gray Leather. The car is very complete, missing just a couple of trim parts. No mud mud flaps as they came off years ago. No rear Cigar lighter. I have the fuse cover, just forgot to attach for the pics. The tools in the tool kit are missing. No carpet flap covering the Jack storage.
Replaced both seat switches last month, both seats work as they should. Window work with the exception of the rear passenger. Haven't used the A/C in years, cruise was working last time I needed it.
On 12/28/97, at 93,825 miles, the 3..5L V-8 was upgraded to a 3.9L V-8 by an independent British repair shop, Consolidated Auto Works in Portland. Donor car was a '94 with low miles on the engine. The Speedometer was replaced on 3/5/99 at the same shop and set to "0". Currently it reads 49,645 and so with all the records combined with knowledge I have, Iestimate the actual mileage on this Rover to be closer to 150,000. I estimate the engine to have far less than that.This Rover has never gone 'Off Road" by either of its owners.
In the 15 years I have owned this, it has been driven less than 30,000 miles. It deserves and needs to be driven more. I have too many cars to properly keep them all in the "driving rotation". Also too many to keep them all under cover. Only reason I am letting this go.
The exposure to the weather has not been kind and you will notice the few areas of rust. Most of it minor surface, but most serious in the right rear, pictured, and the front right passenger floor from the leaking heater core. The Heater Core was replaced at a local independent Rover shop, "Ships Mechanical". Just wish I had noticed it earlier. The body has a few dimples and chips from parking lot encounters. The only accident was to the front bumper thanks to a Lexus SUVblindly backing in a parking lot. There is some paint defects to the "bonnet". More condition details in the many pictures.
I have taken over 100 pics that I can share
These early original Range Rover Classics are getting harder to find. This one is perfect for a restoration! 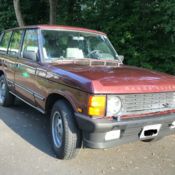 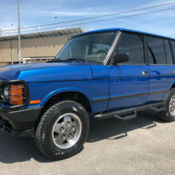 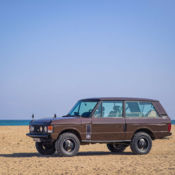 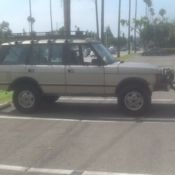 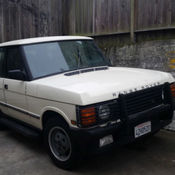 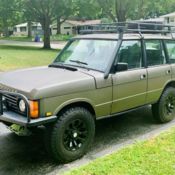 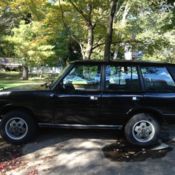 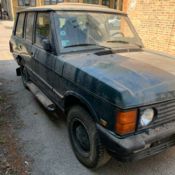 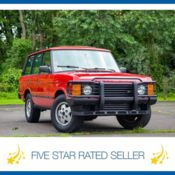