For more information, pictures and videos pleasevisit our website -https://madroverimports.com/inventory

We are very proud to present a legendary Defender 110, a very historic 1990 Land Rover Defender 110 that was part of the 1991 Camel Trophy expedition of Tanzania - Burundi. This vehicle was built in 1990/91 by Land Rover's Special Vehicles Department for the Camel Trophy Event. It was one of the support vehicles for the trip and served a number of different roles carrying extra supplies, team Doctors and/or journalist throughout the event. Equipped with the sought after 200TDi power plant and five speed manual transmission. As you will read below, this Defender has many attributes, extras and a very unique history to go with it. Previously Land Rover enthusiast owned and the vehicle clearly shows it has been well cared for with no expense spared.. This historic 110 has been thoroughly refurbished, it sits on a galvanized chassis and shows no signs of rust anywhere. All other know areas like the bulkhead, and doors are all compete. Its been updated with modern LED lights all round with remote central locking. It's set up for the streets and the trails and it merely needs a new owner who is ready to enjoy and drive this Defender.All Camel Trophy vehicles were produced in both left-hand and right-hand drive depending on the vehicle's role, the event location and the country. This 110 competed in Africa hence why it is a RHD version. Camel Trophy vehicles are based on standard production line Land Rovers, but are built and upgraded by Land Rover's Special Vehicles Department to compete in what was arguably the world's toughest off-road event. The factory upgrades that set this apart from a regular 110 are the additions of two fuel tanks with the standard one and the extra one under the drivers seat, external/internal roll cage, front steering guard and rear fuel tank guard. Which are all factory equipment from Land Rover Special Vehicle Department purpose built for Camel Trophy expeditions.

In 1991, Camel Trophy returned to the African mainland for the first time since the 1983 to tackle an 1800km route over little used tracks and traversing some of the world's most spectacular scenery teeming with precious wildlife. The route retraced the trail of the famous Scottish explorer Dr. David Livingstone, who led a successful quest to discover the source of the Nile in the Nineteenth Century. The 1991 Camel Trophy was significant not only because it crossed the border between two countries but also for its record entry of seventeen nations. Competition, expedition or adventure? Camel Trophy is in fact all of these. Traveling in identical Land Rover Discovery's, the seventeen amateur teams from as many countries set off from Dar es Salaam, Tanzania, to fight their way through waist deep mud and two-meter high elephant grass, climbing the hills of Burundi to the finish in the capital, Bujumbura. The target for the two-man crew of each vehicle is to conquer natural obstacles along the way. With the belated advent of the rainy season, many of the Tanzanian tracks, particularly those through the areas of "black cotton soils", became treacherous quagmires. Progress was slowed dramatically and the incessant whine of winch motors even drowned out the sounds of the African bush. Many teams soon learnt that only teamwork and determination would help them reach their final goal, whilst keeping up a competitive edge through the challenging Special Tasks.

Although the Land Rover Discovery was the vehicle of choice for the competitive teams in 1991, the chosen support vehicles where Defender 110's and this was one of the very support 110's that also made the phenomenal trip. It has been confirmed by the Camel Trophy Club UK that this is an authentic Camel Defender with the correct corresponding VIN and registration "H656 JRW" that shows it supported the 1991 Camel Trophy - Tanzania - Burundi event. There is also a 3" folder stacked with old documentation, receipts and supporting evidence. What an incredible and historic vehicle this is! Although its looks have drastically changed from its original Camel Trophy yellow and all its well equipment adventure ready gear (why would you ever change it!), this Defender 110 has undoubtedly a truly amazing story and history that it will forever be a part of. Here is a great opportunity to own a piece of Land Rover history.

LED lights all round with NAS style lights on the rear

Sound proofed through out

New chequer plating all round 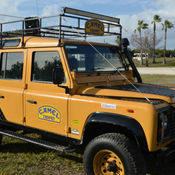 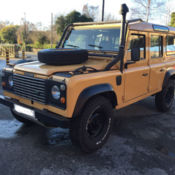 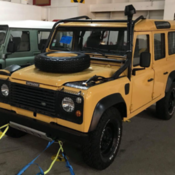 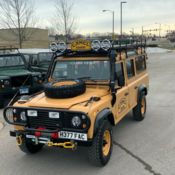 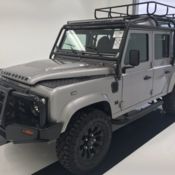 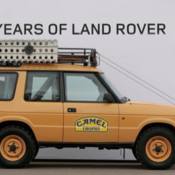 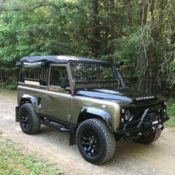 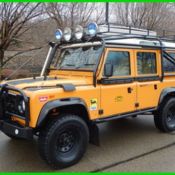 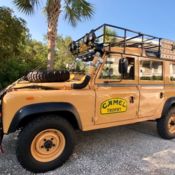 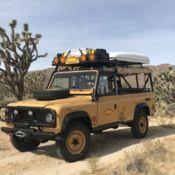