Lamborghini and Ferrari both have their faithful followers, ut within this epic saga between the two fabled Italian Super Car manufacturers there is a clear divide when Lamborghini introduced the Countach to the world in 1971 at the Geneva Motor Show. The reality however was not apparent until 1974 when the first production car was delivered to its first Australian owner. As the years went on the LP400 evolved into the LP400S (series 1, nd 3) and then onto the LP5000 in 1983. It was by this point that Lamborghini had a very well developed example of an original idea. With this also came an equally well developed following of die-hard enthusiast who were now very loyal to the brand. These early Countach owners and fans were to be the basis of the enthusiasm that drove the success of the Countach’s contemporaries: The Murcielago and the Aventador.
The LP5000, n 1983, as the ultimate combination of original Countach Styling (LP400) and adapted up-to-the-minute technology for Lamborghini with a larger 4.7L motor, ince its introduction in 1974. It is said that the LP5000 and the 25th Anniversary of 1989 are the two pinnacles of the Countach experience. While the LP5000 has the raw styling of the earlier cars, t’s the 25th Anniversary cars that have the ultimate combination of mechanical enhancements that allow for reliable and functional enjoyment. Introduced at the Grand Prix at Monza in 1988 to celebrate the 25th anniversary of the company, t was well received and easily the pinnacle of 1980’s Design thanks to the classic Bertone styling. With only 658 examples produced between 1989 and 1990 the Anniversary Countach saw 183MPH, -60 in 4.7 Seconds, ider rear tires, dditional vents to improve cooling, nd lightly redesigned panels and much more throughout. These additions equated to the ultimate iteration of the world’s most famous poster car.
The example on offer here, hassis number ZA9CA05AXKLA12470 is finished in classic Italian colors of red with contrasting tan leather interior and optional red seat piping. In examining the clean Carfax, t shows only two owners. The first residing in North Myrtle Beach, outh Carolina in 1993 with 375 Kilometers registered. The second owner purchased the car in 1997 with only 2,258 Kilometers on the odometer, paringly driving it on special occasions adding a mere 3,044 KM in 18 years. Presently, he car has just 5,302 km’s and has been sitting on and off for the better part of the last 5 years.
Cosmetically, he paint shows some signs of road use towards the front and minor blemishes throughout. Generally speaking, he factory paint from Lamborghini was not of the highest quality in the late 1980s with many Countach’s experiencing fading, racking, nd shrinking due to poor paint quality and application. Thus, any owners choose to have high quality repaints completed. This car however, as not had a glass out repaint and still retains much of its original paint which unfortunately is showing its age with slight spider cracking on the engine compartment hatch, mall chips around the headlights, nd shrinking around the seams of the rear wheel arches. These blemishes are perfectly acceptable if one’s goal was to drive and enjoy the car. The wheels are of original finish with factory OZ Racing stickers intact and are presentable as-is. All glass is original and free of cracks, cratching, nd serious chipping. All black trim components are acceptable as are most rubber items with the exception of the tires which are indeed original. These will need to be replaced as they exhibit significant cracking. Ultimately, he paint blemishes are minor; conducive to 80’s Lamborghini paint quality and hardly noticeable unless closely scrutinized.
The interior shows as a 5,000 km car should with a dash free of any shrinking or fading. The seats also have no major blemishes and remain original. Each bolster is in excellent condition with the driver’s side showing the faintest sign of wear and true to the mileage. The headliner is as-new and all gauges are original, nscratched, nd in proper working order. Door sill leather is always an area where these cars see the most interior wear as owner climb in and out. This car however, s virtually free of any scuffs or scratching along the door sills and door panels.
Upon starting the car, t comes to life swiftly and sounds excellent; absent of unusual sounds, moke or vibrations. The previous owner, mechanic by trade, id have a clutch installed during the ladder part of his ownership which performs well. A $10,000 plus job for any Lamborghini specialty service station. All gauges read correct temperatures and pressures with no known issues to disclose. The brakes perform as they should and shifting is as smooth as a gated shift can be. Steering is also smooth and without any faults. We will however suggest a service, luids change etc. as this car has seen seldom consistent use which is exemplary of the current kilometers. Additionally, he alternator suffers from intermittent charging issues and should likely be rebuilt. The engine bay is original throughout and thus could benefit from a thorough detailing and replacement of any dry hoses and tired clams. Many factory decals and markings remain intact as a testament to this cars originality. The front trunk area is also extremely original with factory spare, ubber fasteners, nd finishes all in excellent condition for being 25 years old. The front hatch is missing its hood strut with will need to be sourced and installed.
The market for 80s supercars has gained serious traction over the past two years as enthusiast from Generation X and millennials now have the disposable income to purchase the cars they lusted over as children. This car presents a great value as a low mileage example complete with manuals, ools, nd jack. With minor servicing, his will prove to be an excellent driver and sound investment at a price point far below comparable cars currently on the market. 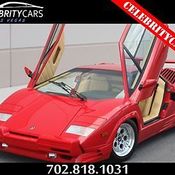 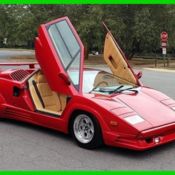 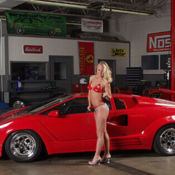 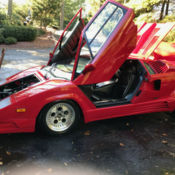 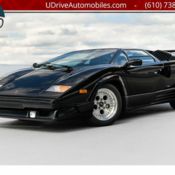 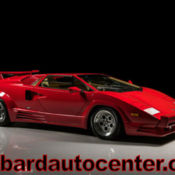 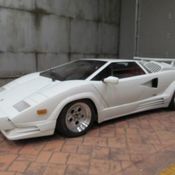 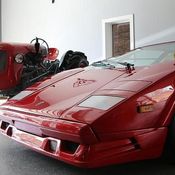 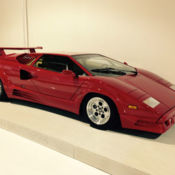 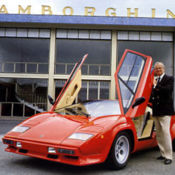