1976 CJ7 Jeep with 4.3 Liter Chevrolet V6 and 5 speed T5 standard transmission. Duel batteries added. The gasoline tank is over size. Every piece of sheet metal was replaced. The Jeep was not built to be a show Jeep. It was built to be a working Jeep and it deserves someone who will use it for what it was built for, off road stuff. It isn't that it couldn't be driven daily. The transmission and front power was built by a company in Utah that specializes in off road vehicles. The power can be transmitted using proper shifting to get the Jeep out of difficult conditions where one set of wheels is stuck. Thiscan be done in either high or low range. There is a roll bar in the Jeep and, of course, the top is removable. The engine was a low mileage V6 from a 1988 Chevy van. the heads were removed and restored. The valves were done at the time.
The radio is obviously after market with speakers up above and on both sides of the panel. I would say that there is NO rust but you can see some......However, obviously, it is only on the gas tank shield, so really doesn't count. There is one flaw. I stupidly drove it to a gas station, with the hood loose and it popped up, putting a small dent in the front of the hood. The Jeep was built over many years and it was painted quite a few years ago. The orange will still polish but the decal across the hood has not stood up well, at all. i never got around to putting a winch on the front but it does have a high lift jack and a 5 gallon reserve tank. 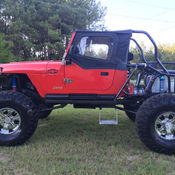 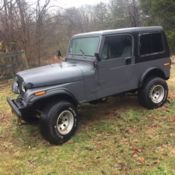 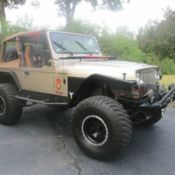 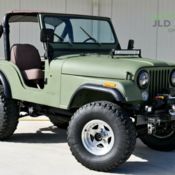 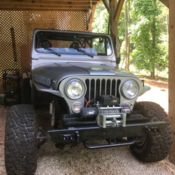 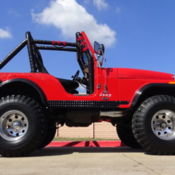 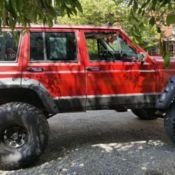 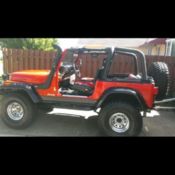 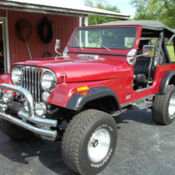 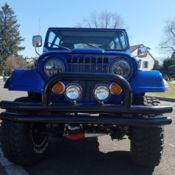