Here's a solid, able-bodied off-roader that comes at an attainable price. This 1985 Jeep CJ7 runs great and is nicely equipped to tackle rough terrain. It's wearing a few well-chosen exterior upgrades to enhance its already substantial curb appeal, as well as some add-ons to provide increased functionality during those times you find yourself with the urge to stray from the asphalt. CJ7s rolled out at a time when the American buying public confirmed that, while... they were avid fans of the rugged appearance that military-purposed vehicles offered, they still wanted a modicum of civilized comfort blended into the mix. They're a full 10" longer than the preceding generation to create additional room inside the cabin and their broader track allows for a wider wheelbase for better stability and a smoother ride both on and off the road. This was also the first version of the Jeep to feature door cutouts shaped to accommodate actual hinged doors, an attribute that's taken advantage of here, as there is a pair of doors included with the car. Clad in black paint, with a set of fresh fender flares at all four corners and a pair of tube running boards at its sides, this is a very capable looking ride. A sturdy RC Smitty 9.500 winch is perched on the front bumper to extricate you from tough situations, as well as to assist others and both a conventional soft top, as well as a bikini-style top that will really come in handy during these warmer months, will be on board when this CK7 pulls into its next owner's garage. Inside, the seating is in great shape, with a pair of buckets up front and a bench in back that wear fresh vinyl covers and sit over a floor that's been coated for protection from the elements, making this interior much easier to maintain after its outings off the beaten path than its carpeted counterparts. Farther forward, the dash area is another strong feature, with its set of factory gauges all functional and easy to read and a group of aftermarket displays on board off to the side to keep a closer read on motoring functions. The fresh appearance of the dash pad, as well as the window visors above, suggests they were recently added. Lower the glove box door and you'll have access to the controls navigating that sturdy winch on the front bumper. This sharp looking vintage Jeep is powered by a 4.2 liter inline 6 that's in good running form, offering plenty of gusto for off-road pursuits. Wearing its factory-correct 2 barrel carb on top, it's likely the original engine and teams with a 4 speed manual transmission to maximize its output. 4-wheel drive agility is easily activated via the lever sitting side by side with the manual shifter on the transmission tunnel and with the generous amount of ground clearance this '85 features, its trail navigating abilities are substantial. Power steering makes for easy maneuverability and the ride it offers is surprisingly smooth in everyday settings, especially considering its added lift. The rubber meets the road in the form of a quartet of beefy 35x12.5R15LT Ridge Runner M/S Radial tires mounted on ultra sharp 15" black steel wheels. Below, the undercarriage would be considered plenty solid in any car, let alone a vehicle that's been around for more than three decades and presents such a strong temptation for spirited motoring. Offering a nice combination of value, curb appeal and rugged functionality, this 1985 Jeep CJ7 is all about fun. Call today! 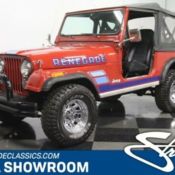 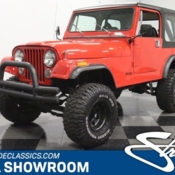 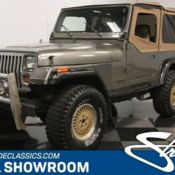 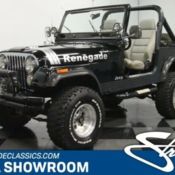 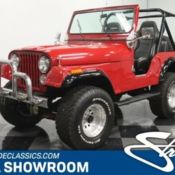 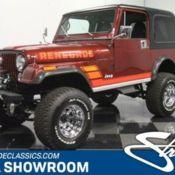 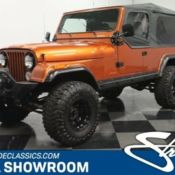 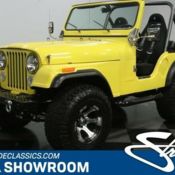 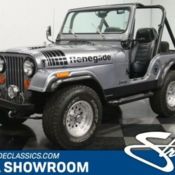 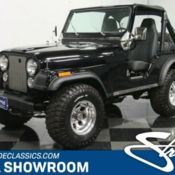