1971 Jeepster CommandoDauntless V63speed manualDana300 twin stickFront Axle - Dana 27A (closed knuckle)Rear Axle - Dana 44 (Narrow track)Passenger side auxiliary tank12k Viking Winch
Thank you for looking at my listing for my 1971 Jeepster Commando Station Wagon Camper Edition. I purchased this JeepsterIn 2005 from a church in Memphis TN. It was donated to them by a member who was the original owner. Jeepster was used for maintence and other duties for the church. I drove it as is minus except for a tune up, Pentronix points elimination, front bearing and a carb until 2010. At that point the Jeepster was parked and stored inside for 4 years while I was on the road for work. I took it out when I could and I started it at least once a month to keep the fluids moving through the engine. Last year when the clutch went out, I started prepping it for a new paint job, repairing the dash and wiring and other maintence that I dreamt about in the long run. The original wiring and dash were a hack job from the previous owner. So I started with the dash repair and wiring while slowly sanding and painting.
I used the Jeepster mainly as a weekend driver and took it camping. The 4wheel drive works great and it has never seen anySerious off-roading other than washed out fire roads to camping spots.
Included with the Jeepster are the following- all the original parts I removed in preparation for paint ( lights, badges, seat, etc)- CJ7 wiring. The wiring was always a hack job and an issue. I was in process of removing old wiring to replace it with a complete harness with a fuse box from a V6 CJ7- Jeepster Service Manual- original hard top and roll bar (not shown in pictures, currently in storage- all other loose parts I have for it.
Items needed to get her back on road- drivers side exhaust manifold is broken. See picture- clutch; the pedal goes to the floor. Transmission still shift through all gears and is not jammed- carb need rebuilt- wiring needs installed- will most likely need the brakes redone
I was rotating the engine and was running it until the gas in the tank ran out. I still have been hand turning it once I started pulling the engine apart. Was going to remove it to work on it and replace clutch. That never happened.
Things you should know- frame is solid, but appears to have been repaired or supported at one point.- floor was rhino lined at one point. It was white when I got it. Then it was painted black- side gas tank was used once. It works. The tank flip switch is between the front.- the spare tank was part of the "camper special" that is what I was told and found in some research- rear drivers corner needs attention- lower rockers have rust and I found they had been bondoed when I started sanding
If you have any further questions please let me know. I am only selling the Jeepster because I just do not have the time to finish it with family, work and other projects. 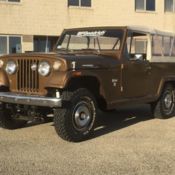 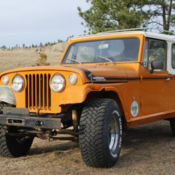 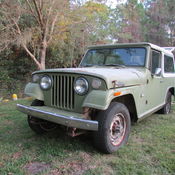 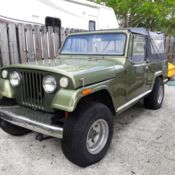 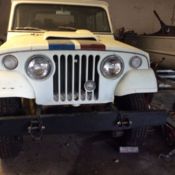 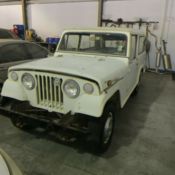 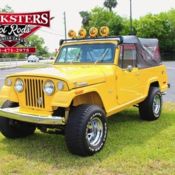 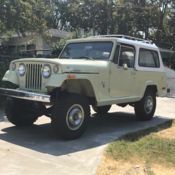 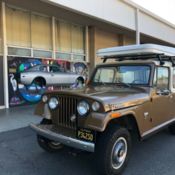 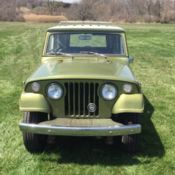