About thisVehicle is for sale locally and I reserve the right to end the auction early. It is also for trade for muscle car project or complete but no junk. 1967-1972 swb gm trucks are also of interest. Thanks.Ask any and all questions before bidding.Seller's Notes1982 GMC ( has chevy grille ) SWB 4x4. 305 motor th350 transmission. this truck is pretty straight forward. no surprises here. starts, idles runs and drives as it should. clean title in hand. the camo was professionally done years ago and still looks alright. dont let the theme of this truck fool you, it is much nicer than many of them running around today. small dent in drivers fender as shown in pics, other than that truck is straight and rust free other than minimal surface rust. the 305 is like all the other 305's out there just not real powerful. the tires aren't the best but they do hold air. truck has heat and a/c power windows and locks although they need a little help as most of the old ones do. factory radio works and has an uncut dash. has dual tanks, one works gauges need work.ExteriorInteriorEngineDeposits are nonrefundable.Created on the eBay Motors app 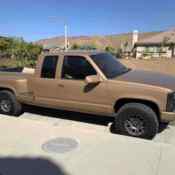 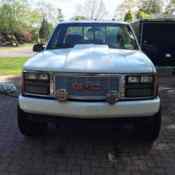