3 years ago I purchased this Metro from a Metro enthusiast who had rebuilt the engine. I was planning on restoring it over the years, ut things have changed and I can't do that now. You can read more about that from the information below. Here is the basic information about my 1992 Geo Metro LSi hatchback:
VIN = 2c1mr2460n6783205Color = Bright RedMileage = 143,404 (the guy I bought it from thought the mileage was higher than this like around 185,000, he odometer works, o it must have been unhooked at some point)Transmission = 5 speed manualEngine = 1.0L I3
I originally purchased this Metro for my kids to drive back and forth to school since it was 40 miles round trip daily. They couldn't quite get comfortable with manual shifting, o I ended up purchasing another vehicle for them that had an automatic transmission and I drove the Metro daily until a year ago (late winter 2015) when it started to have a whining sound when I drove it. I thought it was a belt, ut couldn't locate the problem. So, took it into my mechanic and he said it needed a new clutch. He also said some oil was leaking from the heads. He told me it probably wouldn't be worth fixing. I haven't had another mechanic check it out, o it may be something else that is wrong with it since it still drives fine. Since that time, haven't driven it, xcept to drive it around our neighborhood in March and April to keep it functional. The car still drives fine, t just has a whining sound when it is running. The battery will probably need to be replaced now since it has been sitting for a while. It seemed to charge up fine when I jumped it and drove it in the spring, ut I haven't been driving it since.
I bought the car from a guy who loves Metros and fixes them up for himself to drive and also sells some of those he fixes up. I bought it from him in mid-February 2013. He had rebuilt the engine at 135,500 miles (just a few months before I bought it) and also did the following at that time:- New transmission seals- All new seals/gaskets- All new main and rod bearings- All new piston rings- New valves- New valve stem seals- New water pump- New clutch- Rocker panel rust was reworked- New AM/FM/CD stereo was installed
I bought it for $1,750 and had a $90 XFi cam installed from Delta Camshaft and I bought new tires for it from Tire Rack for about $220. So, have around $2,060 in it. I replaced one hatch strut and have the other strut to replace the second one (you can see it sitting on the front seat in the pictures), ut I haven't did that yet. I have only changed the oil and filter on it since I purchased it. I haven't had any other problems other than I mentioned. Around town, t was getting in the low 40s per gallon. On the highway I would get mid-upper 40s per gallon. Fun car to drive. With the tall tires, t did okay in the snow. The exhaust is fine, oor handles and windows all work fine, ll safety equipment and instrumentation worked fine, here is a crack in the front windshield on the passenger's side, ut it does not restrict vision and it has not become any worse in the 3 years I have owned it. Air conditioning is still in place, xcept the compressor belt, ut I don't know if it would work. Everything worked fine when I was driving it daily. It was a very dependable car.
The 'A' frames are not rusted which is very unusual for a car this age. I don't know of any rust on the exterior. The paint looks to be original except for the rocker panel area which was redone 3 years ago. I waxed it when I got it, ut it didn't do much for the finish. It looks okay, ut it is not a new car. I also completely cleaned the car when I got it. It was filthy. I took out the seats and carpet and cleaned the entire interior, ashboards, nbsp;and shampooed the seats and carpets. I did find some rust below the brake pedal. It was a top layer of a small area of the floorboard that came off when I was cleaning. The rust wasn't completely through the floorboard. It would be a great car to restore. I would have liked to have done that, ut with 5 kids and 2 in college, can't do it at this time in my life.
I would like to see someone get this car who will appreciate it and possibly fix it up. I know with the low gas prices, ot many people are thinking about saving gas. But if you drive long distances, his would definitely save you money in the long run. It just needs a clutch and possibly some work on the heads. I know I won't get the $2,060 I have invested in the Metro. I'm pretty realistic. Just make me an offer. You might be surprised.
I have this listed locally as well. I will remove this ad as soon as I can if it sells locally.
I'm located in Northern Indiana very near South Bend. My zip code is 46530. I'm just a few miles from the 90/94 Toll Road and from U.S. 31. You can contact me through eBay if you have any questions. 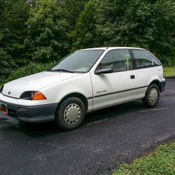 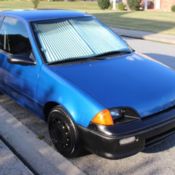 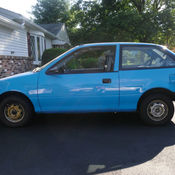 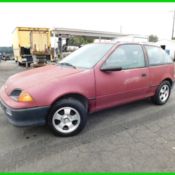 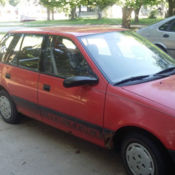 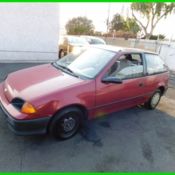 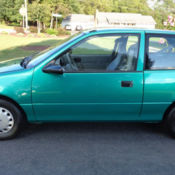 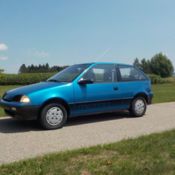 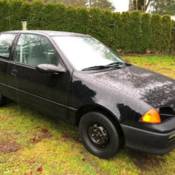 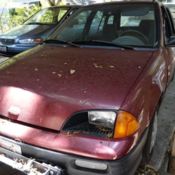