In 2006, Filmmaker Piero De Luca decided to build a car and document his talented friends as they build a period correct sixties show car. The idea behind the car was to give the impression that this was a old hot rod that was recently restored. This is achieved with actual parts off of old hot rods and the details of what would of been on the car in 1958 right down to the correct plug wires. There is not much on the car that is newer than 1958.

The question that is often asked is â€œwhere did I find it?â€.

The car was finished in 2008 and debuted at the Grand National Roadster show Suede Palace and took home 4 awards. From then on it has been shot for several magazines including the cover of Rod and Custom. The Documentary "Mad Fabricators Volume 5.5 The Live Wire Chronicles" was released in 2009 and did very well.

1931 Ford five window coupe was found on a farm in Texas and was a old hot rod body that was chopped3 Â½ inches back in the 60â€™s. It even had a few chickens living in it!

The body was completely restored replacing all the rust panels and completed in metal finish.. The chop was also attended to and made correct, doors were aligned / gapped and open and shut like a dream. visor was molded in, trunk shaved, cowl vent filled, wheel wells replaced, dimpled gauges in the firewall, Chopped and filled 1932 grille with hand made chrome mesh insert. Blue tinted glass.

Fabrication #3 of the popular â€œAceholeâ€ frame. The front of the rails are â€œSweptâ€ and the rear is Zâ€™ed 11 inches. The rear ride height can be adjusted by the custom rear spring perch. Custom made removable cross member build by Lucky Burton Luckyâ€™s Hot Rods.

Rebuilt 1956 Pontiac rear that was in a Model A Ford in the sixties.1940 ford front spring (used in the rear) with the original setup that came with 1936 Ford wishbone spring perches that were cut off at the bones. Chromed and painted to match the front axle.

Bob Bleed made the ladder bars that were Zâ€™ed as well to prevent them from hitting the floor. The rear is painted dark metallic blue with fades.

15 X 7 early Ford style wheels that were chromed and reversed in the sixties for a show car and never used. Firestone 7.00 - 15, bullet lugs and NOS Cal Custom valve stem cover.

Dave Martinez - Martinez Industries black and white diamonds and pleats. NOS sixties silver piping was used on the headliner and seats. Seats were hand made and the entire interior was tailor made to fit the 6â€™2 tall owner. The car is comfortable for a taller person.

Dash is a altered stock Model A with 1958 Edsel insert (Most asked question on the carâ€¦â€What is that dash out of?â€) Padded and pleated dash. Early sixties Suntune gauges and blue jeweled indicators.

Steering wheel is out of a late fifties early fiberglass boat half clear and half black and gold metal flake.

Headlights are unknown aftermarket, chromed and reverse scalloped and striped by Skratch. Tail lights are 1950 Buick surrounded by an original old chrome nerf bar off an old hot rod.

Houses a new 12 gallon Model T style tank and battery. A little extra are the painted fades and diamond inserts in the stock holes of the deck lid. Trinidad carpet and diamond pleats continue from the inside. 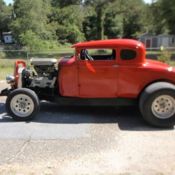 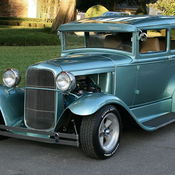 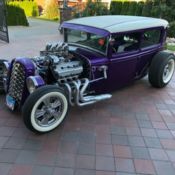 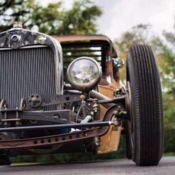 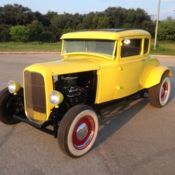 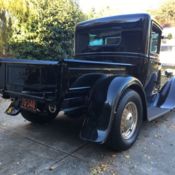 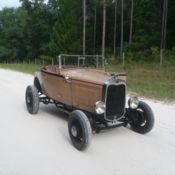 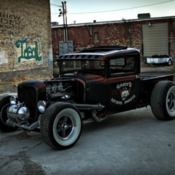 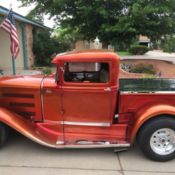 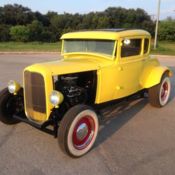