Hello nostalgic Hot Rodders, and Drag Racing Historians world wide. Up for auction is one of the most well preserved vintage Hot Rod 1932 Ford Coupes to hit Ebay in a very long time. This car was originally built around 1957/1958 in Virginia Beach, Virginia. The owner/builder/driver was named Jesse Jackson II, and he not only Drag Raced the car throughout the state of Virginia, but also drove the car on the streets. An artist named George William, from Rocky Mount, North Carolina painted the mural on the deck lid. The car named "Forget, Hell" was Drag Raced starting in the late 1950s, until the mid 1960s when it was parked in a garage, and covered up until a month ago! You read that right, this is a pure time capsule that hadn't seen the light of day until recently. It is in remarkable condition, and should be left this way. In fact, I wouldn't sell it to anyone that would alter this car in any way,shape, or form. As the saying goes, "They're only original once" . The engine is a potent 1957 Corvette 283 V8. The numbers show it as a factory dual quad engine, which is evident by one of the original vintage photo', enclosed. Later, the induction system was changed to an Offy intake with six 97 Stromberg carburetors. It has a factory Delco GM dual point distributor. Backed to the Corvette engine is a 1939 Ford Transmission with Lincoln Zephyr gears. An open driveline helps make things a lot easier. Out back, the rear end is a 1950 Mercury. The cylinders were carefully soaked with Marvel Mystery Oil, and after a week of sitting, all connections carefully cleaned, Strombergs cleaned, fuel was put in, a new battery installed, the moment of truth came a few days ago. One crank of the ignition, and the engine fired right up! It did what one would expect out of any engine that has sat for half a century. It smoke, and the smell of Marvel Mystery Oil was evident, but after starting the car up a few times, it quickly dissipated. The car now starts up, and without any smoke or other issues. Its clear by the sound, that the engines is built. * I have video of the car starting up, and running! As stated previously, this car in it's entirety, is untouched. The wheels, however, were sandblasted, one the hood sides was taken to PPG for a professional computer color match, and the wheels were then painted the exact maroon color that the rest of the car is. A set of vintage Firestone 15" white wall slicks were mounted on the rear, and a brand new set of Coker 5.60x15's are mounted up front. This is what the car needed. It changed the overall look of the car, and is what was originally on the Hot Rod. Although still not identified, the small chrome headlights are mounted on custom stands. The taillights are 1941 Chevy, but are mounted vertically. The original Virginia license plate was found in the car, and was remounted to its original rear location, with a Hollywood license plate light. Inside the Coupe, is a work of art. Maroon & white "Tuck & Roll" with diamonds were done around 1957/5, and is all original. A 1956 T-Bird steering wheel, Stewart Warner gauge, 1955 Chevy Ignition switch,1940 Ford rear view mirro, 1949 Ford window cranks and inside door handles, complete the cockpit of this time capsule.The Dragster headers, unchopped and channeled style epitomizes the East Coast look of the 1950s and 1960s. The car is deserving of being in a museum (public or private) or to a collector that is passionate about historically significant Hot Rods. I am the Historian Editor for Ol Skool Rodz & Car Culture Deluxe magazines, organizer of the Suede Palace buildings at the Grand National Roadster Show and Sacramento Autorama, and a founding member of the Shifters SoCal car club, so I understand the importance of a vehicle like this. They simply do not pop up as much these days. In fact, it is rare ! Along with the vehicle, the buyer ( new caretaker) of this Deuce Coupe will get the original '32 hood top, custom made hood sides with 5 inch louvers, original 1950s photo's of the car, and an original title! The car is going to be featured in Ol Skool Rodz magazine, and it looks like the car will be on the cover. People all over Social Media, and the HAMB are going crazy over it ! I would love to keep the car, but the recent purchase of a home with much needed repairs forces the sale of this. Due to the world wide "buzz" going around about the vehicle, I reserve the right to end auction at any time. All sales are final. There are no warranties, exchanges,refunds,or returns. I will gladly ship this anywhere in the world. I know of 2 reputable Shipping Companies. Buyer pays for shipping, and I will see to it that the car arrives in a safe and prompt manner. Don't hesitate to call me any time, day or evening. I am in Southern California - Pacific Standard Time - Thank you, and have a wonderful day, Axle 909-437-2068. 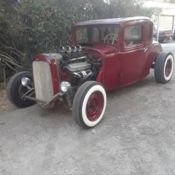 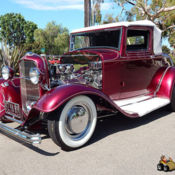 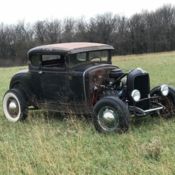 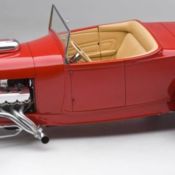 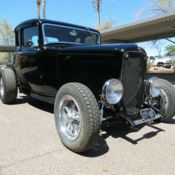 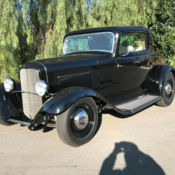 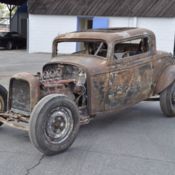 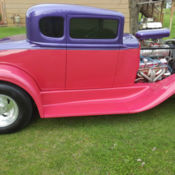 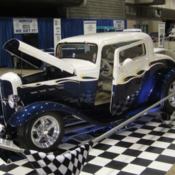 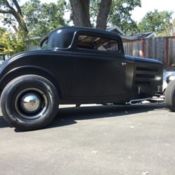