There's a hierarchy when it comes to 1965 Ford Mustang bodies, and the 2+2 is king. This was the inaugural year for the highly sought after fastback, so we really get excited to see one that has all the right upgrades, like slick paint, air conditioning, a five-speed, and a powerful 347 stroker V8.

Crisp lines, great detailing, and sporty sheetmetal make this one timeless. It only gets better when the 1965-correct Vintage Burgundy is given a modern clearcoat upgrade. It delivers a first impression that's both sleek and sophisticated, and that's exactly what you want on upgraded machine like this. The paint is great for highlighting the fastback's dramatic long hood/short deck design. Plus, these always had the best profiles with the race-ready rear window slats. When they invested in the paint and body, they also made sure that the brightwork had extra shine to go with the glossy paint. They also gave this one some very sporty upgrades. The blackout rear panel adds some extra GT-style appeal above the trumpeted dual exhaust tips coming out of the rear valance. And the 16-inch American Racing Special Edition Torq Thrust wheels add to both the performance and shine of this fastback.

Inside, the first impression is that this was restored to be very vintage. You see it in the taut vinyl on the low-back bucket seats, the bright center console, and the fold-down rear seat. Even the air conditioning is coming out of the classic factory-style unit. But they also took their time with some subtle upgrades. For example, the factory AM radio is still on display, but your real tunes come from a modern JVC AM/FM/CD stereo with iPod and Bluetooth that's hidden in the glovebox. The upgraded Bosch auxiliary gauges are cleanly mounted under the dash and out of the way. The matching tach is so well done on the column that it looks like it belonged there since day one. And have you counted the gears on the stick shift yet?

When you pop the hood, the big shine signals to you (and everyone else) there was a nice investment here. You'll not only love the style, but also the substance, too. While the 289 was the hot motor in '65, that has been stroked to a performance-minded 347ci. The upgrades don't stop there. You also have a performance cam, Holley double-pumper four-barrel carburetor, Edelbrock Performer 289 intake, Champion aluminum radiator, and headers feeding a rumbling dual exhaust. It's a terrific power package, and you get to take better advantage of it than anyone in '65, because this was also upgraded to a five-speed manual transmission. The whole setup is designed to give you a great feel of the road. And there are even nice enhancements, like disc brakes up front, traction bars in the rear, and modern grippy ZR-rated tires.

Here's a rare and speedy red fastback that has the enhanced V8 to back up its enhanced appearance. A package like this will always be in short supply and high demand, so you better hurry if you want to make it yours. Call now! 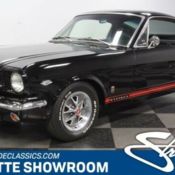 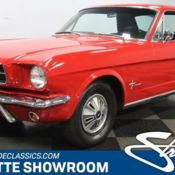 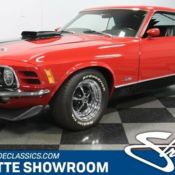 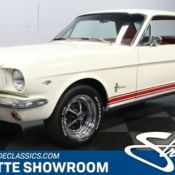 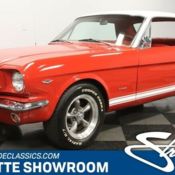 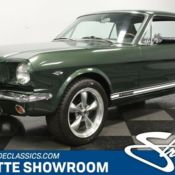 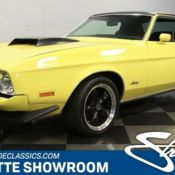 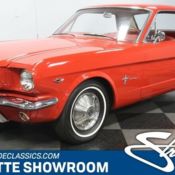 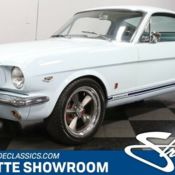 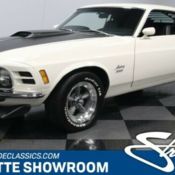