In the TV show Overhaulin' Chip Foose created typically fabulous customs and hot rods. Those who were "marks" on the show have held onto these cars as special treasures. In this one they called it, "The First Rod Re-Do." (See history below.) But there comes a time when you're literal "baby is due" in February 2009 that you have to 'choose between baby and your hot rod baby.' And there you have it-this Chip Foose masterpiece is for sale by the original owners who are now expectant parents with baby do in February!

History of the Overhaulin' TV show builds: "Overhaulin' builds an incredible car in just a week." Could they build a traditional hot rod in seven days? "Chip Foose replies that if you took 30 guys at a shop and had them work 16 hours a day, you could do it." Thus, a normal shop with a few guys couldn't do it. Foose continues, "Besides getting this kind of job done in this kind of timeframe would be expensive. 'An average shop rate is probably $2,500 per guy per week, 'says Chip. 'If you do the math, if it's straight time, that's $150,000 in labor alone.'" So with this type of labor and the multitude of custom-crafted parts, including frame, suspension, engine, and interior this Model A has upwards or over 200K into it.

Initially, the project seemed like it was going to be an easy one for the veteran team of builders that is only too familiar with turning well-worn vehicles into show quality hot rods over the course of seven days. But this Model A would end up as the famous "Overtime" Overhaulin' Show; to date the oldest car constructed on the show. (Quotes from Overhaulin' The Magazine a Hot Rod Magazine Special, was on stands through July 25, 2006).

Observations: The initial teardown revealed that both the heavily modified body and frame were in sad shape. While the body could be repaired and heavy reinforcement added to strengthen the flimsy skin of what was once a 2-door sedan, the same could not be said for the chassis and its components. The chassis found under the car would prove to be in even worse shape, to the point of being completely unsafe and a hazard to anyone. The frame lacked any structural boxing, appropriate crossmembers, not even front brakes, and was just plain unsafe for this build.

Major decision: After the preliminary evaluation showed the body and frame would require massive amounts of labor to correct, it was decided the crew would focus on the body while a completely new and much more stylish '32 Ford chassis would be a wiser choice. The bodywork began with a trip to the sandblaster so the team could see exactly what they were dealing with. The bare skin was probably worse than they even imagined, but they just went straight to work reinforcing the body and massaging the lumpy panels. Once the body was relatively solid, a new TCI '32 Ford chassis was added to make a perfect match. The '32 chassis necessitated an all-new subfloor bracing to make the new chassis and finished body safe and sound.

A chrome and polished stainless steel I-beam suspension and a fresh 9-inch were installed along with a rebuilt 312ci Ford Y-block that was a definite step up from the worn out Mazda 4-cylinder engine. All the work in the "Overhaulin'" garage happens at a blistering pace. Not always done, but in this case the painter was Chip Foose himself. Finish colors would include black with red wheels,.

On the final day, with the crew working through the night, the car all came together and impressed even the team itself that has seen plenty of gorgeous rides completed in the shop. The moment of ultimate truth came when the pranked owner, Matthew Wyatt, was given the final reveal and shown his vehicle and exclaimed, "It's not mine, I think I just died and went to heaven!" Well, the car was indeed his, and the "Overhaulin'" crew grabbed a quick nap before getting their next life-changing challenge to complete in another seven days, and so goes the circle of hot rodding life.

Body: Caltime Metals provided all the sheet metal to put the car back together, including tubing and flat metal to make the floor pan and hood. Yep, those pieces were hand formed to fit, which took some serious skill and finesse. Chip Foose says they stretched the nose so much to fit the Y-block with the '32 frame that they pulled the front end up, but they kept the commercial '32 grille that was on it so it was still Matt's car.

Windshield: David Willey of Foose Design came up with a cast-aluminum DuVall-style windshield frame. David widened it until it fit-and the rest of the team widened the cowl to fit the frame rails.

Chassis: A Total Cost Involved (TCI) chassis was selected when the original unit found under the car was determined to be in very sad shape. The new '32 frame would give the car a much better profile with its sweeping lines and provide a much sturdier platform with its boxed 'rails. The rear of the frame was shortened 6 inches to tuck the '32 Ford fuel tank under the rear of the Model A body. Up front is a chromed and polished stainless I-beam and hairpin set up with a monoleaf transverse spring, with a four-bar and coilover suspension in the rear. SO-CAL Speed Shop Buick-style disc brakes slow down the front with a pair of Ford 9-inch drums in the rear.

Drivetrain: For power Chip Foose elected to use a "retro" powerplant and tracked down a Ford 312ci Y-block that was rebuilt at L&R Automotive Supply in Santa Fe Springs, California. A Ford Cruise-O-Matic three-speed automatic transmission (by SW Performance Transmissions) backs up the mill that has been dressed up with a trio of original (rebuilt) Stromberg carbs with fabricated stacks on an original Edelbrock intake, flanked on each side by a pair of polished Mooneyes finned valve covers. The engine got a special-grind cam to increase the torque. Stock Ford exhaust manifolds flow into a custom stainless steel exhaust system, which MagnaFlow built on-site to fit the Model A. The crew went with a single exhaust because the chassis was so small, incorporating a custom Y-pipe, 2Â½-inch mandrel-bent tubing, and a 7-inch round 2Â½-inch muffler.

Wheels & Tires: The set of '36 Ford wheels and hubcaps was one of the most unique features on the car when it rolled into the "Overhaulin'" garage. Mike Curtis at MHT Wheels built custom adapter plates so the cool stock '36 Ford rims would work with the later-model Ford bolt pattern on the rearend housing. Chip decided to retain this element and had them restored and fitted with a set of fresh Firestone wide whites from Coker Tire. A 5.50x16 was selected for use up front with a 6.50x16 in the rear.

Body & Paint: Basically every panel of the original car was heavily massaged, as well as reinforced, before the final bodywork could even begin. Once squarely placed on the new chassis, the passenger door was found to be 1 1/2 inches too short, and the list goes on. Major modifications include the fitment of a narrowed '41 Ford dash and a custom aluminum windshield frame mated to the cowl. After the last panel was straightened, all the pieces were hauled over to West Coast Customs and sprayed with a deep coating of BASF Black. The checkerboard firewall is a touch from Chip's own childhood.

Interior: After a '56 Ford F-100 seat was narrowed to fit the body, Bill Dunn's team handbuilt a rear seat to match and then covered them and the interior panels in genuine red leather from Keyston Bros., accented by white topstitching and white piping. Redline Gauges reworked the '41 Ford gauge panel to use VDO gauges and custom sprayed a gauge faceplate with a Bones-style font for all the numbers. A '40 Ford-style steering wheel and "Swan Stick" from Gennie Shifter finish off the inside. An excellent opportunity to own a hot rod by Legend Chip Foose 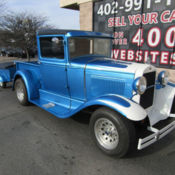 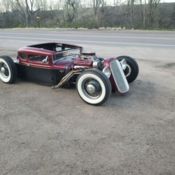 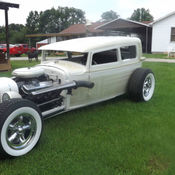 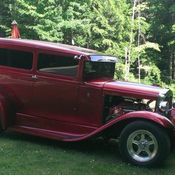 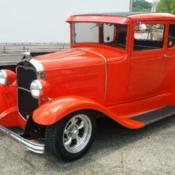 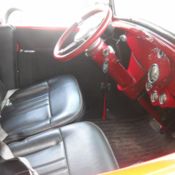 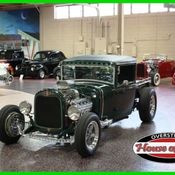 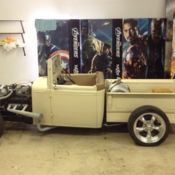 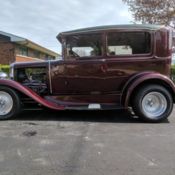