The description below was sent to owner of car while he had it on car site Im selling for a friend, car is located in Washington for pickup
Okay, so what you have is a 1972 Mustang Sportsroof, also known as a Fastback. Yours is NOT a Mach I, with only 15,622 being built, compared to 27,675 Mach I's (all of which are Sportsroof cars). That makes for just over 38,000 Fastback cars made in 1972, compared to an overall 1972 Mustang production of 125,000. Most people will think it is a Mach I.
Your car is equipped with the Q-code 351 Cobra Jet engine. The "C" is for Cleveland, and the factory power rating is 266HP. WAY under-rated, plus yours has a performance camshaft, bigger carb, aluminum intake, high energy ignition, and more. I'd estimate the power output of yours somewhere in the 350HP range, plus or minus. Plenty of power.
Yours has the 4-speed Top Loader transmission, far more desirable than an automatic. I'm not sure what rear gears yours has, but for sure it has the heavy-duty 9-inch Ford rear end.
Color is Medium Brown Metallic. Yours has the pedestal rear spoiler, which is a great option IMO.
The Cobra Jet engine was the high-horsepower option for 1972, and not many cars had them. Combined with the 4-speed, and being in a Fastback body, it is a desirable and rare car. The 351 CJ is a 4v engine, or "four-barrel" engine. This not only means the carburetor is a 4v carb instead of 2v, but also the 4v engines have completely different heads with MASSIVE intake and exhaust ports, and associated monster valves. They are prone to fouling plugs because of that, but have huge top-end power potential. When you start your car, put just a bit of RPM on it (1000-1200), and hold it dead steady while listening closely. You'll hear it begin to run on 5 or 6 cylinders or so, and as it warms up, it will pick up a cylinder at a time, both increasing the RPM's and also smoothing out the sound and feel of the engine. You'll get to know when she's warm and firing on all cylinders; then it's go time! There is some rust in trunk area, Ill get some pics from owner upon request 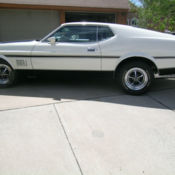 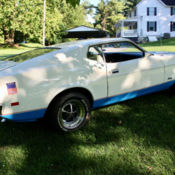 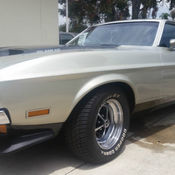 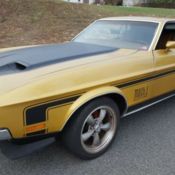 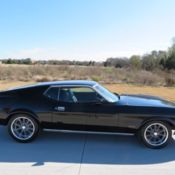 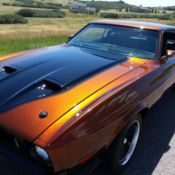 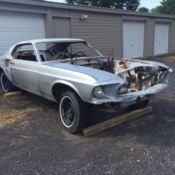 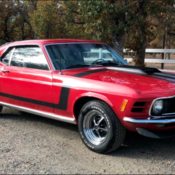 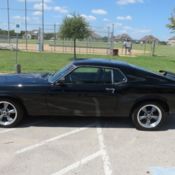 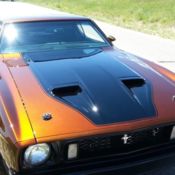