1934 Ford Deluxe Three-Window Coupe Previous family owned this Ford since 1984 and did a complete correct restoration in 1986 The restoration cost was over $12k in 1986 money Stated mileage in 1984 was 94,935 miles and today it only shows 96,091 miles Rebuilt and balanced late '34 LB 221 CID Flathead V-8 engine Three-speed sliding gear manual transmission Biarritz Cream exterior with beige accents and gray interior Rumble seat, cowl lights, heater, electric wipers, dual horns, stainless steel wheel covers Purchased from Richard Rawlings of Fast 'N Loud Included with paperwork and restoration notes from the 1980'sSome cars simply get better looking with age. This 1934 Ford Deluxe Three-Window Coupe is one of them and we at MotoeXotica Classic Cars are proud to present it. The previous owner served as caretaker of this vehicle for more than 10 years and it was a member of the family since 1984, when his late brother in-law bought it at the Kruse International Minneapolis Classic Car Auction. The brother in-law did a complete restoration in 1986 costing over $12k plus labor and the extensive restoration notes are included. We recently purchased this awesome 34 Ford from Richard Rawlings of Gas Monkey Garage. Richard purchased this car from the family in Minnesota personally with the plan on building the car but he felt it was too nice and original and would be best to leave the car alone.Finished in Biarritz Cream, the car's paint and trim are in overall very good order but there is a blemish on the right rear. The car's lights are in very good order, including the fantastic looking optional cowl lights.This Ford rides on Bedford whitewall tires, sized 5.25-5.50-17 and each tire surrounds wire wheels with center caps. The tires and wheels are in overall very good order.The car's bodywork is in very good order, including the rubberized roof that was typical of the era. Instead of a trunk, this model features a rumble seat and a rear-mounted spare tire with a cover. The engine bay is tidy and the car's bumpers are in very good order.Under the vee'd hood is a rebuilt and balanced late-1934 221 CID Flathead V-8 engine that was rebuilt during the restoration in the 1980's. The stated mileage in 1984 was 94,935 miles and today it only shows 96,091 miles. Backing it is a three-speed sliding gear manual transmission and a 4.11:1 rear end.Inside, the car's gray interior is in overall very good order. The bench seat looks good, as does the rumble seat. The carpet and headliner are in good order, as is the metal instrument panel with its full instrumentation. However, there are modern ancillary gauges, engine temperature and oil pressure, mounted below the dashboard. The factory three-spoke steering wheel, inner door panels, mirror glass and shift lever all look good. There is no radio in this vehicle.The 1934 Ford (the Model 40B) was not as substantial a model year change as the previous two years had been. Noticeable changes included a flatter grille with a wider surround and fewer bars, straight hood louvers, two handles on each side of the hood, smaller headlights and cowl lamps, and a reworked logo. The bare metal dash insert was replaced by painted steel.The V-8 engine's output was again increased, this time to 85 horsepower and the four-cylinder Model B engine was in its last year, as was the Victoria body style; nevertheless, there were fourteen body options, the Tudor being top-seller. The standard three-window coupe was deleted.Deluxes had pinstriping, again twin (chromed) horns and twin backlights. Inside, they got more elaborate wood graining.This car is currently located at our facility in St. Louis, Missouri. Current mileage on the odometer shows 96,091 miles that is believed to be actual based on included records but is exempt due to age. It is sold as is, where is, on a clean and clear, mileage exempt title. GET OUT AND DRIVE!!!VIN: 40724571Note: Please see full terms and conditions listed below that pertain to the purchase of any said vehicle, thank you. 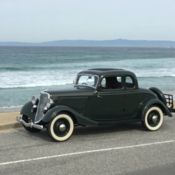 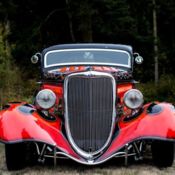 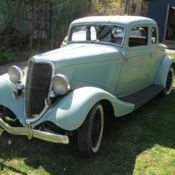 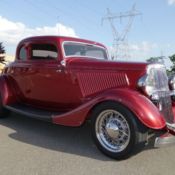 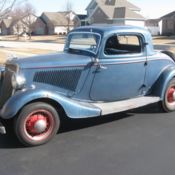 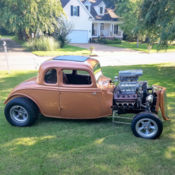 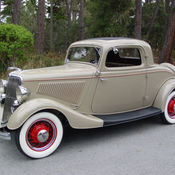 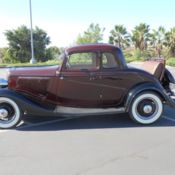 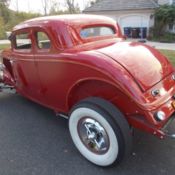 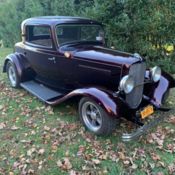