Even from the comfort of the 21st century, the flathead Ford V8’s contribution to motoring can’t be overestimated. It wasn’t the first V8, as many mistakenly believe, but it was the first one that was available to everyone at a reasonable price. The result was that the world discovered that going fast was really, really fun! The ideal combination of power, playful handling, reasonably effective brakes, and gorgeous styling, all at an everyman price, well, there was just no way the V8 Ford wouldn’t have succeeded. If you haven’t driven one, you’re missing one of the great treats of the collector car world, and it has been my personal experience that even poorly-kept flatheads are good and the good ones are truly great. It’s virtually impossible to drive one of these cars without a big smile on your face. Go ahead, try it yourself!

This 1935 Ford Deluxe Phaeton is one of those great flatheads that has only gotten better with time. The phaeton was originally designed as a low-cost car, but in the fullness of time, the attractive styling, open-air experience, and room for the whole family have made the phaeton among the most highly-sought body styles, topped, perhaps, only by the roadster. Ford’s 1935 styling was clearly an evolution, and you can see both the echoes of 1934 in its grille and horns and the immediate future in the rounded, creased fenders that envelop the wheels rather than merely shielding them. The result is a handsome car that has an old-fashioned look that will simply never go out of style.

This particular phaeton was restored in the early 1990s and built to do one thing and one thing only: hit the road. Starting with a very clean, solid original car was certainly an advantage, and the honest look works as well today as it ever did. The Slate Green finish is correct for 1935 and while it shows some signs of age and use, the overall look is quite appealing. The paint has a lovely soft shine that works best on vintage iron like this, all the doors fit well, and the hood opens without too much effort. You’ll note there’s a jaunty Apple Green pinstripe along the belt molding, a stripe that even goes through the door jambs, indicative of the painter’s thoroughness and care. Other details include a neat crest on each of the front doors (who or what it represents, however, is lost to the sands of time), an accessory greyhound hood ornament up front, and a handsome metal spare tire cover for the rear-mounted spare. The chrome ranges from good to excellent, with very nice bumpers, a clean, straight grille, and beautifully polished trim like the windshield and horn domes. Experts will spot the sealed beam headlights up front, which throw plenty of light for safe nighttime driving and blue dot taillight lenses add a period look (a set of original taillight lenses is included with the car). As I said, this is not a perfect car, but it has the look of your favorite pair of jeans: comfortable, well-used, but still very presentable.

The interior was likely restored at the same time as the bodywork using correct Ford “leatherette” materials. Both front and rear seats were reupholstered using standard patterns and are holding up rather well, with the back seat in particular looking almost untouched. The door panels may very well be original, as they’re slightly darker and the material is a bit heavier, and they certainly suggest a car that has led a good life. In typical Ford fashion, the front seat area uses a tan rubber floor mat, while the back seat area is carpeted (also protected with a rubber mat). For an affordable car, the Ford is quite nicely finished, with a woodgrained dashboard, big, elegant instruments, and a handsome banjo-style steering wheel. All the gauges work except the temperature gauge, which was still a capillary-style thermometer setup. This car is also equipped with an accessory Ford AM radio, and the system is complete albeit non-functional, with a speaker box, head unit, and tubes in their own enclosure under the dash. There’s even an antenna mounted under the driver’s side running board! The car does include a large cache of spare parts, including a number of radio tubes, so it may be possible to get the radio up and working once again. Other accessories include wind wings, a custom handle on the emergency brake that matches the shifter knob, and a switch for the 2-speed Columbia rear end. Aftermarket turn signals have been added in the name of safety and the car is outfitted for touring with a set of new side curtains and a new top that looks fantastic.

In 1935, Ford V8s still used babbit bearings, so when the car was restored, they made the conscious choice to swap in a 1937 flathead instead, which offers modern insert-type bearings for easy service and long-term durability. As a car designed with touring in mind, they knew it would see a lot of driving and thanks to the Columbia 2-speed rear end, its outstanding highway manners make a trailer almost superfluous. The balance of the engine bay is quite stock, from the familiar Holley 97 carburetor to the high-mounted generator and cooling fan, to the twin radiator hoses coming out of the center of the cylinder heads. A factory coil lights the fires using a front-mounted distributor, and aside from some peeling engine enamel, the engine bay is in excellent condition. Most of the time it runs just fine on its mechanical fuel pump, but there is an electrical pump down on the frame, just in case. We’ve never had to use it, or the choke, to get this car started, which bumps to life with a familiar flathead starter sound and idles well even when it’s cold. It would be a mistake to judge this car solely on the cosmetic appearance of its engine bay, because the mechanical operation of this car is absolutely first-rate.

The transmission shifts beautifully and the clutch is light and easy to modulate with zero chatter or grabbiness. As with all great flatheads, it’s easy to get acclimated when you’re behind the wheel and within minutes you’ll feel like you’re driving an old friend. Synchros on second and third gears mean seamless shifts and that Columbia 2-speed rear end is a highly desirable option for touring. Using the electro-vacuum mechanism from a 1942-48 Ford, there’s nothing more than a toggle switch on the dash. Flick it to the up position, engage the clutch, listen for the clunk, and you’re in high range. At that point the car will happily cruise at 55-60 MPH without breaking a sweat. Around town, do the opposite: flick the switch to the down position, engage the clutch, and you’ve got punchy acceleration and great hill-climbing. It’s a great way to travel and the system has proven its reliability over the decades. This car has also been upgraded to 1939 Ford hydraulic brakes, so the system looks very authentic under the car and offers improved performance over the original mechanical brakes. The underside of the car is grungy and dirty, of course, but there’s exactly zero rot in any of the critical areas and not even any surface scale on the floors and support structures. And it’s not even much of a leaker! It currently wears a set of correct 16-inch welded wire wheels painted Apple Green to match the pinstripe, but we also have a set of accessory General “Jumbo” wheels and 14-inch radials that are available.

In fact, this car comes with a significant cache of spare parts. In the trunk you’ll find a tour-ready kit that includes tune-up parts, spare radiator hoses, a replacement generator, a fuel pump, and other necessities for life on tour. The larger group of parts includes things like fuel pumps, carburetors, trim pieces, radio tubes, gaskets, water pumps, and dozens of other items that will surely be useful in the future. There’s also a factory owner’s manual and sales brochure from 1935.

You already know we love this Ford. Our next old car purchase for our personal collection will likely be a flathead Ford V8, and a car like this is exactly what we would want for our permanent collection. Reliable, smooth, easy to drive, and an absolute joy on the road, this handsome phaeton delivers on the promise of Henry’s greatest achievement. You already know you want one, why not get one that doesn’t ask for anything from you but a tank of gas and a quiet country road? 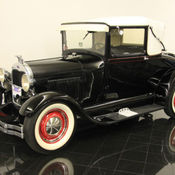 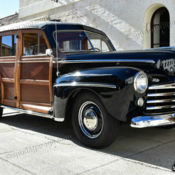 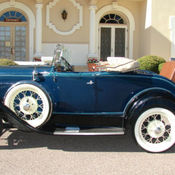 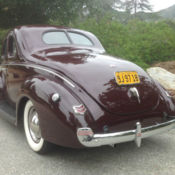 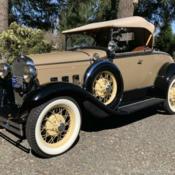 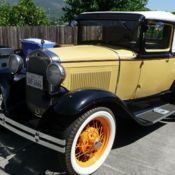 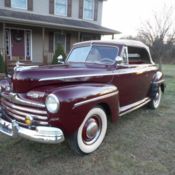 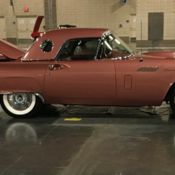 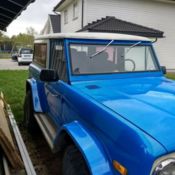 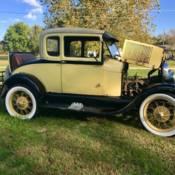