The T-bucket is one of the most enduring and endearing styles in all of hot rodding. The idea has always been that the T-bucket was built from scavenged parts, but many of them, such as this bright red roadster, are just too beautifully finished and detailed to be considered junkyard dogs anymore.Finished just a few years ago and based on a modern fiberglass body, the shape is archetypal T-bucket, with the tall, vertical windshield and stubby pickup truck bed out back. Nobody's really sure how that came to be, since Ford pickups never looked like this, but today it's the accepted style of the T-bucket and it just looks right. Every inch of this one has been expertly prepped, eliminating any waves or distortions in the bodywork, and it's a lot nicer than you'd expect from the bare-bones T. The paint is a handsome burgundy metallic, which is a nice change from either the primer black that has recently come back into fashion, or the excessively metallic hues that characterized T-buckets of the '60s and '70s. In fact, just about everything on the car was bathed in that beautiful paint, including the radiator shell, frame, and most of the suspension. There are a few chrome bits to add some contrast, including the tall windshield with support stanchions, and King Bee-style headlights give it a traditional look. In their back-to-basics style, many T-buckets had bare interiors with nothing more than a blanket for upholstery and if you were lucky, maybe an oil pressure gauge. Not so here, where there's two-tone upholstery and a full array of gauges keeping an eye on the small block up front. Stitched up in traditional pleated fashion, the seats and side panels are nicely done, and this one even features a custom-tailored carpet set that makes it feel civilized. The doors, of course, are simply for show, because no true T-bucket driver does anything other than hop over the sides and hit the road. The dashboard is nicely turned out with a complete array of white-faced Stewart Warner gauges set into an oak instrument panel. Just the basics, right?The engine is a 383 cubic inch Chevy stroker motor that was built to run. The most striking feature is the big Holley 420 blower pulling 9 pounds of air through a pair of 4-barrel carbs. The heads were ported and polished and it was fitted with a Crower valve train. All told, it makes a shocking 606 horsepower on the dyno, enough to make this T every bit as fast as it looks. Dress up gear includes the trick throttle-actuated air cleaner and chrome valve covers, and the headers are exactly what every T-bucket wears: long tubes blowing through massive chrome side pipes. The chassis is nicely finished, with most of the details out in the open for easy examination. The front clip is traditional trailing arms and a tube axle, while out back there's a narrowed 9-inch riding on a set of coil over shocks and ladder bars. In between, you'll find a quick-shifting TH350 3-speed automatic transmission that's the only sane choice in a car like this. You'll note that there are disc brakes in back only, but they're plenty effective with all that rubber on the ground. That's good news, too, because the only rolling stock you can put on a T-bucket are skinnies up front and massive meats out back; in this case, they're gigantic Mickey Thompsons on shiny Weld Pro-Star wheels.Remarkably, it seems that T-buckets are as popular today as they ever were, and their combination of outrageous looks and potent performance makes them a real party to drive, with this one being nicer than most. Call today! 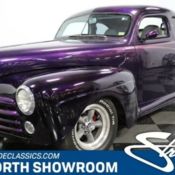 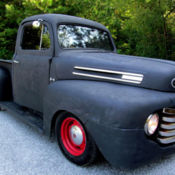 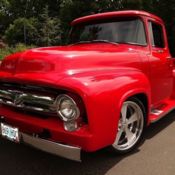 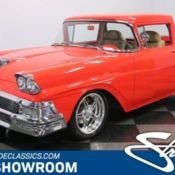 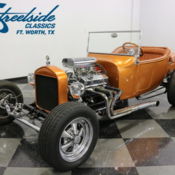 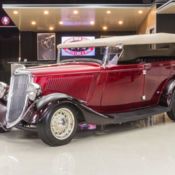 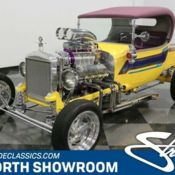 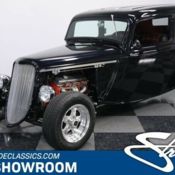 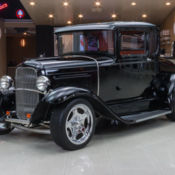